Did you know that a mysterious crocodile lurks in a corner of a museum in Caterham? Just one of nearly 10,000 curious treasures in a collection watched over by a merry crew of volunteers, who are keen to share their stories. To introduce us to her 5 (current!) favourites, here is Catherine Allen from East Surrey Museum. 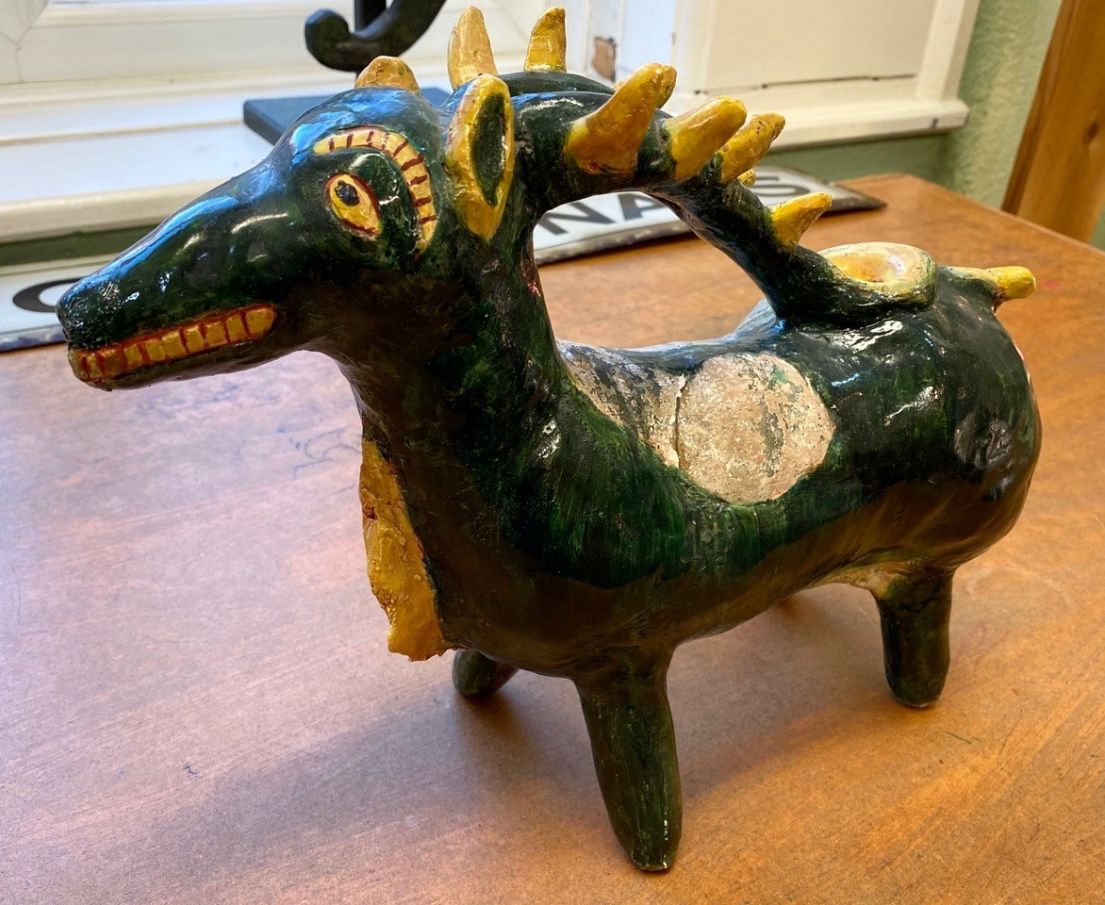 Meet Rudolph, the museum mascot (he's not the crocodile... you'll find him lurking further down this post!) © East Surrey Musem

Local museums are a treasure trove. Nestled in the middle of town, in a beautiful old building with its own intriguing history. Packed to the hilts with unearthed artefacts, stories, and items that might seem random if left anywhere else. Adorned with a crew of passionate volunteers happy to share their knowledge. 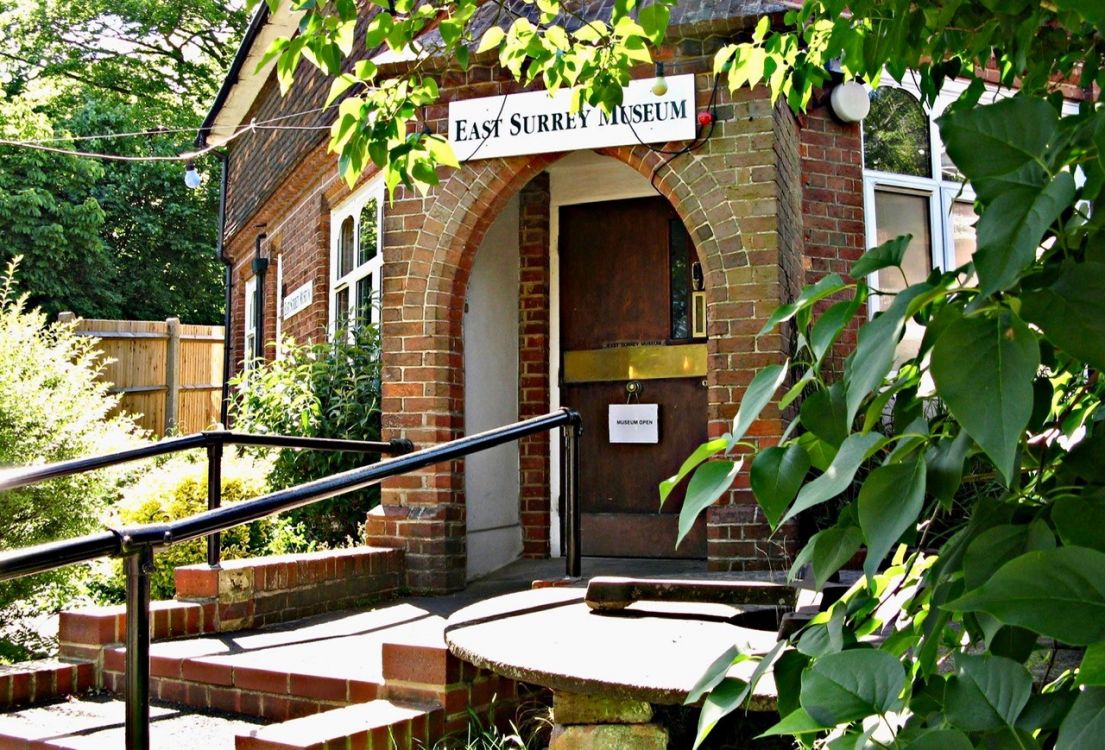 This is East Surrey Museum in a nutshell. Since 1980, we’ve been located in Caterham, Surrey, building up an extensive collection with significance to the local area in and around East Surrey. Forty years on, the museum has amassed almost 10,000 items including archaeological finds, maps, postcards, and a multitude of other objects. Digging through the store rooms, you’re always likely to discover something unexpected. How about a pair of wooden ice skates, or a men’s vanity kit dating from the mid-20th century (complete with a cut-throat razor and strop)? Straw hats from the 1850s that were once used for maypole dancing at a local school? A doll curiously named ‘Una Lettuce’, previously owned by local author, Una Broadbent?

East Surrey Museum is home to the ordinary, weird and wonderful – so much, in fact, that there is never room to display everything! With that in mind, here are a handful of stand-out objects from our very curious collection… 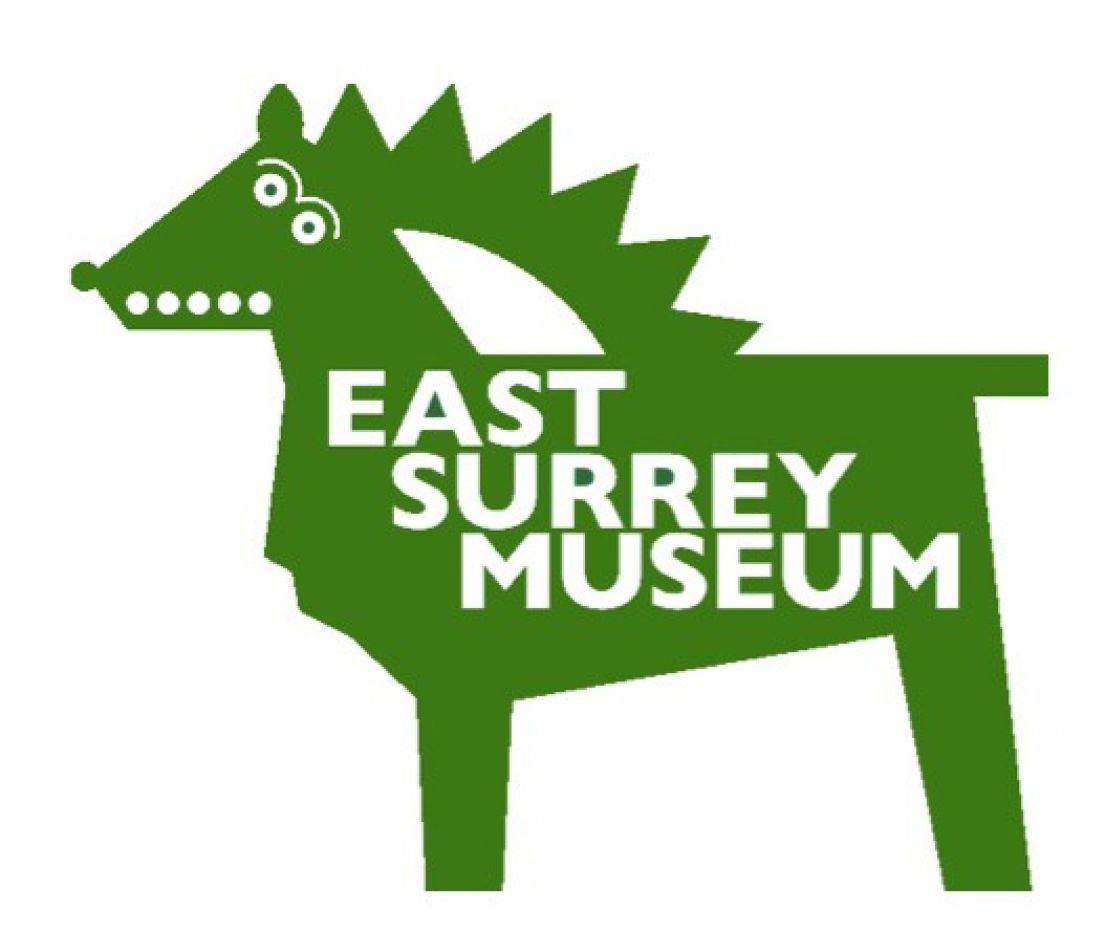 Is there a better place to start than our Museum Mascot? Rudolf is a reconstructed Medieval aquamanile – a water jug used by upper-class households at meals to wash their hands, with water poured out through its nose.

Rudolf’s connection to our museum can be traced back to the very start, having been discovered during the notable Alsted Manor dig by local history group, the Bourne Society. This took place from 1968-1973 under the supervision of Lesley Ketteringham (who later became the museum’s first curator) and uncovered the site of a 13th or 14th century sub-manor house near Merstham. Amongst the intriguing array of local archaeology excavated were six broken pieces of pottery, later identified as pieces of a Medieval aquamanile. It was reconstructed and has sat in our museum ever since we opened.

The wealth of material found at this excavation actually inspired the creation of East Surrey Museum, with the realisation that these fascinating finds needed a home. The rest, as they say, is history. 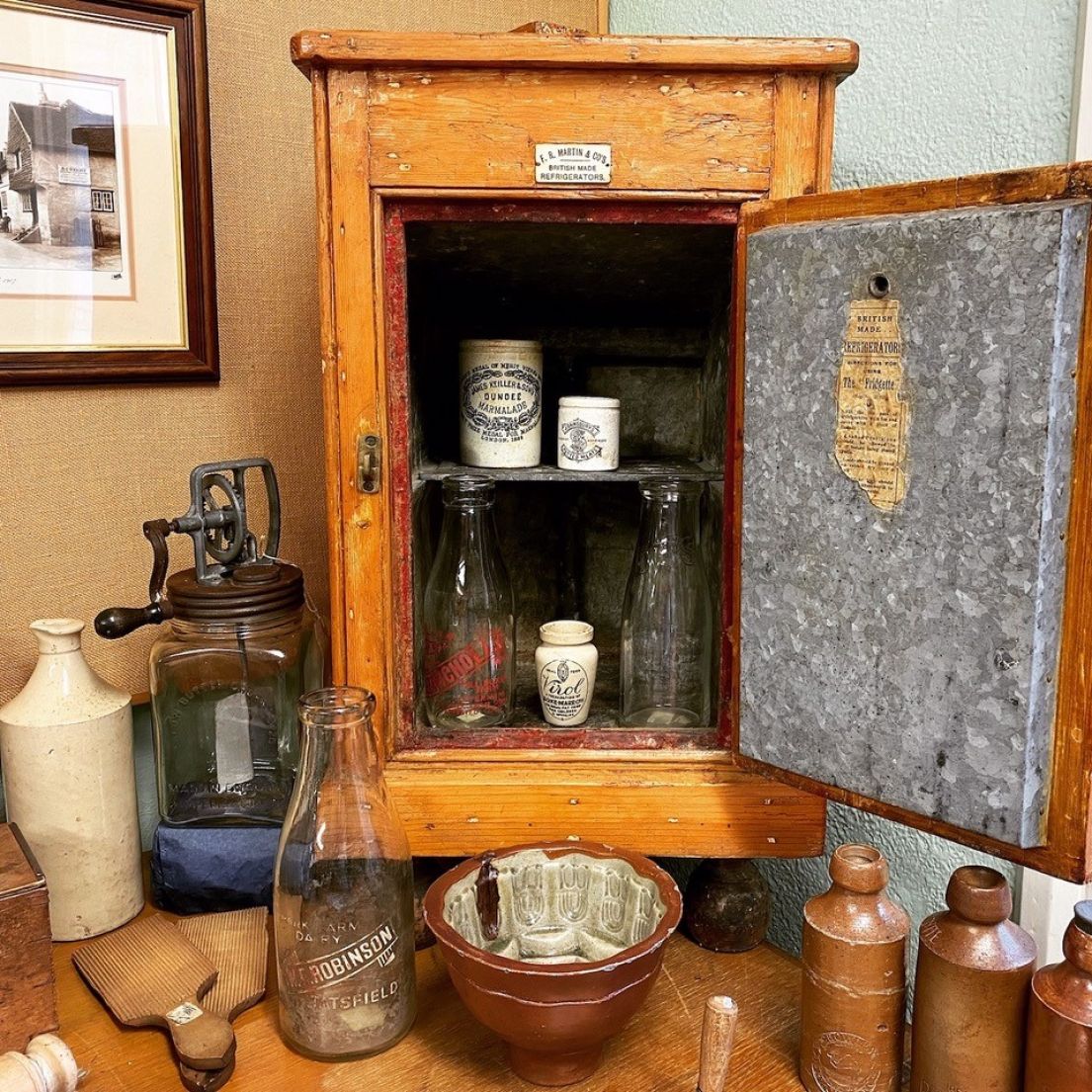 Not just a cabinet... a chiller cabinet / © East Surrey Museum

When we held our Kitchenalia exhibition earlier this year (which displayed a selection of items and machinery likely to be found in a typical Edwardian kitchen), the star of the show was undoubtedly this remarkable early refrigerator – or as the instructions on the door call it, the ‘Fridgette’. Electric refrigerators only started becoming increasingly popular from the late 1920s, when mass production techniques made them more affordable. Before then, keeping food sufficiently cool was tricky, ranging from the use of buckets filled with cold water to an ice-box refrigerator like this.

Dating from 1912, it worked by placing a large block of ice into the tray or compartment near the top, allowing cold air to circulate down inside the box. The ice needed to be replaced regularly and a drip pan, emptied daily, was left beneath the box. 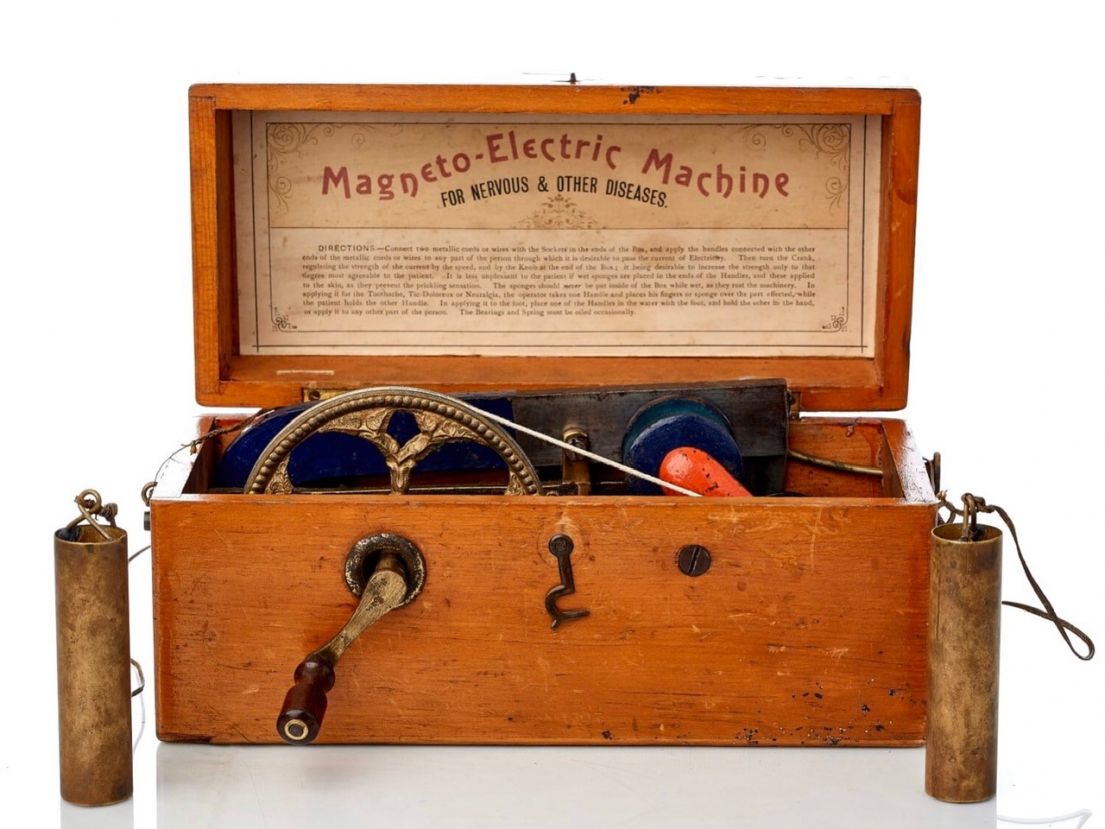 The treatments once sold as ‘cures’ for a whole host of ailments were bonkers (and quite often painful). Over the years, the museum has collected a few varieties – like a Sunic Violet Ray Machine, an Overbeck Rejuvenator, and this Magneto Electric Machine.

Electrotherapy devices like this had a fascinating history treating “nervous and other diseases”. Particularly popular in the 1800s, it claimed to alleviate a range of aches and pains by applying a ‘mild’ alternating current. The patient would hold the handles while the crank was turned, with the speed of this determining the strength of the current. The instructions on the box state that “it is less unpleasant to the patient if wet sponges are placed in the ends of the Handles, and these applied to the skin, as they prevent the prickling sensation”. Doesn’t that sound nice? 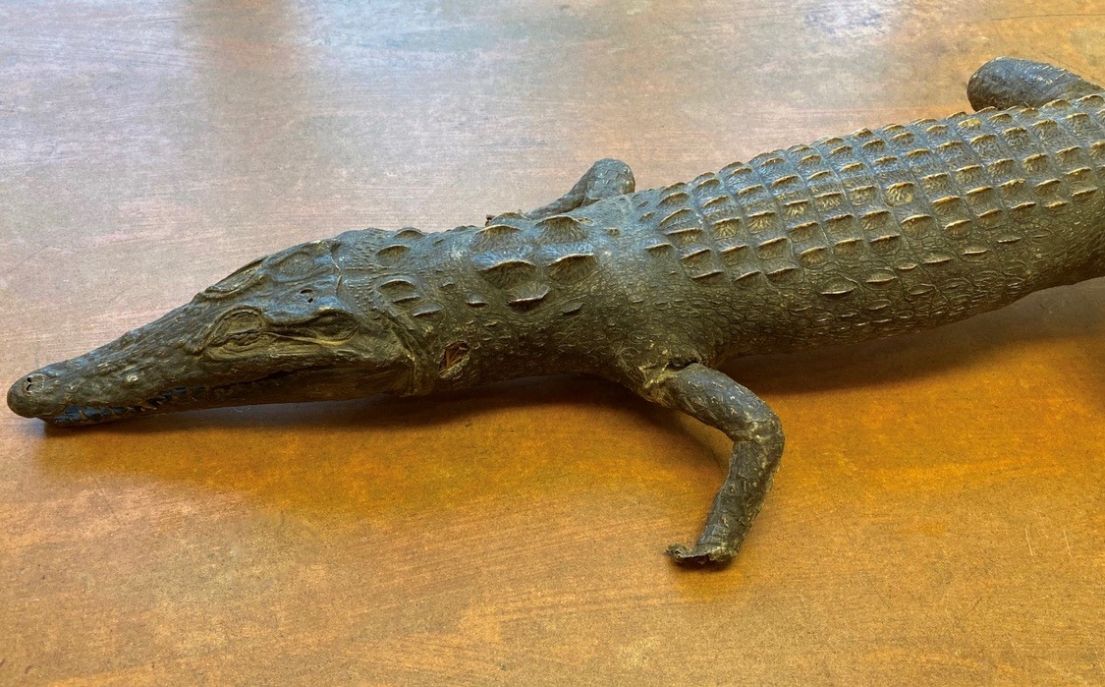 Who would have thought a stuffed crocodile would find its way to a local museum in Surrey? Though it now has a permanent place in one of our rooms, how exactly it found its way there remains a mystery. Even after some digging, there doesn’t seem to be any concrete information on its origins.

What we do know is this: The small dimples on some of the scales on its underside, which are apparently pressure-sensory organs, show it to be a crocodile, not an alligator. We also know it has been at the museum for a long time, as it is first mentioned in museum records in 1987, when it was included in a handling exhibit in the Children’s Room. It is thought to be a species from the Far East and, considering the taxidermy job, is possibly a tourist souvenir rather than a scientific specimen. We also know that, somehow, it has become part of the furniture, and a staple of the museum’s collection. 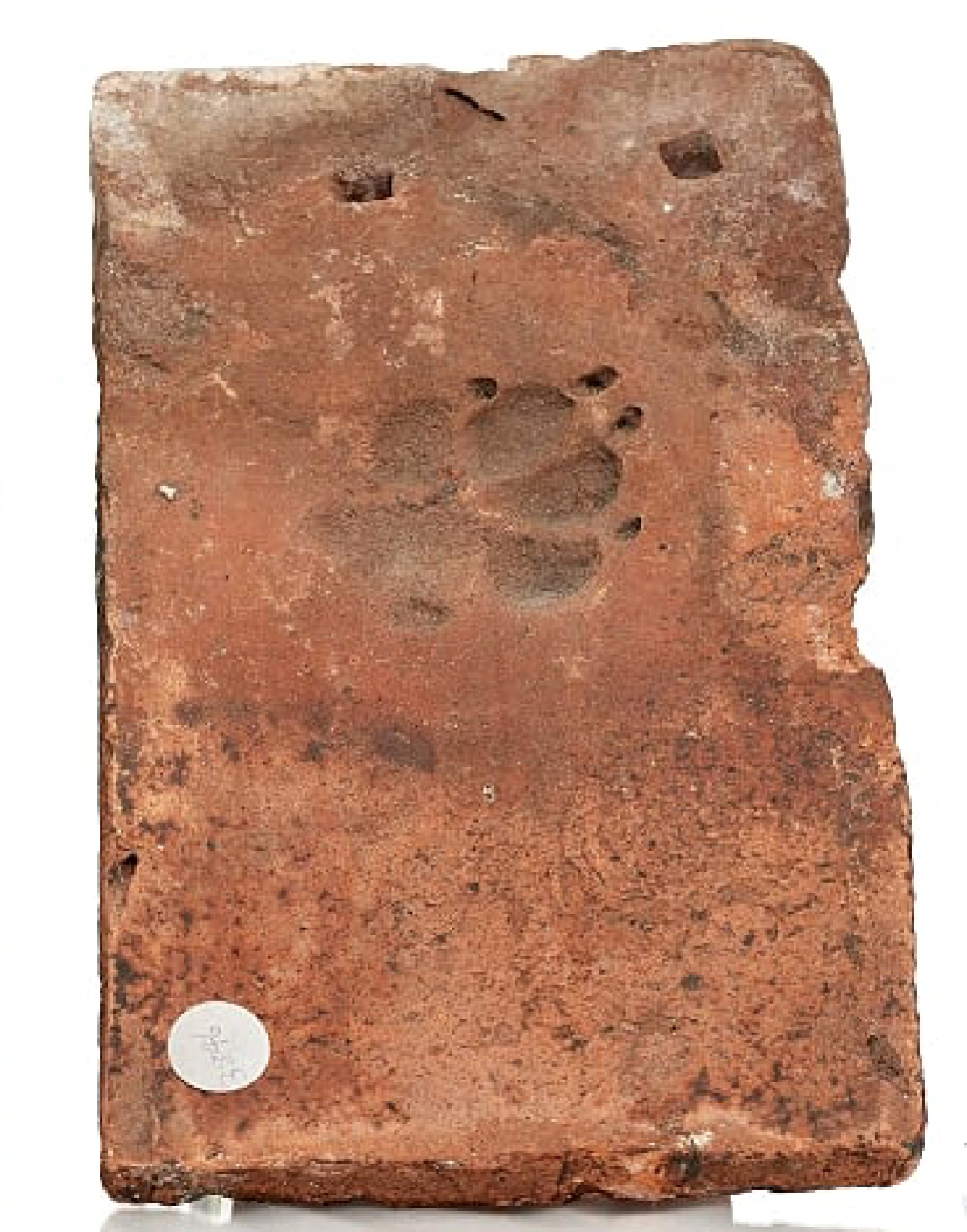 For this year’s Heritage Open Days, East Surrey Museum joined a Flower Festival at a nearby church, St John’s. Our eclectic collection actually came in handy when choosing objects that linked to the ‘Hidden Nature’ theme – with a selection of fossils and an iguanodon footprint set amongst bay leaves, acorns and flowers. The most intriguing objects we used, however, were two clay tiles with dog paw prints very clearly pressed in.

One is Roman, found at Chelsham Villa in the late 1990s. The archaeological finds from this dig were analysed (including pottery fragments and coins) to discover that the villa was in use from the second to the fourth centuries AD. The other tile is Medieval, found during an excavation at Place Farm in Bletchingley. The excavation unearthed all sorts of interesting discoveries beyond tiles, including Late Bronze Age or Early Iron Age flints and deer bones dating from the late 15th or early 16th centuries.

It’s hard to pick a favourite item from the museum – partly because, despite volunteering here for over two and a half years now, I still feel I’ve only scratched the surface of the collection – but these tiles must be two of the most remarkable items I’ve come across. I also love that they embodied this year’s Heritage Open Days theme in a very unique way, proving that nature often hides in unexpected ways – like a dog paw print in a tile – and can still be found even thousands of years later.

East Surrey Museum is open 3 days a week (Wednesday, Thursday and Saturday) with free entry, though a donation to the museum’s upkeep is always appreciated. With our array of permanent and revolving displays, the museum is packed with curiosities, but arrangements can be made to see particular items not currently on show.

Catherine has volunteered as a steward with East Surrey Museum since 2018, and is currently the museum’s social media officer. Alongside this, she volunteered with HODs in the build-up to the 2019 festival, graduated from King’s College London with a degree in History, and is continuing to look for work in the heritage industry.