This painting has more to tell than a first glance shows.

Benjamin Britten & Peter Pears - individually great musicians, but together simply extraordinary. Their partnership was celebrated on stage but had to be hidden off it. The rich symphony of that love story though is now told at their beautiful home with its extensive collection. Drawing on photographs and notes, but also the details hidden in receipts, bookplates, and this painting, Dr Christopher Hilton, Head of Archive & Library, is here to tell us more about their 40 year duet. 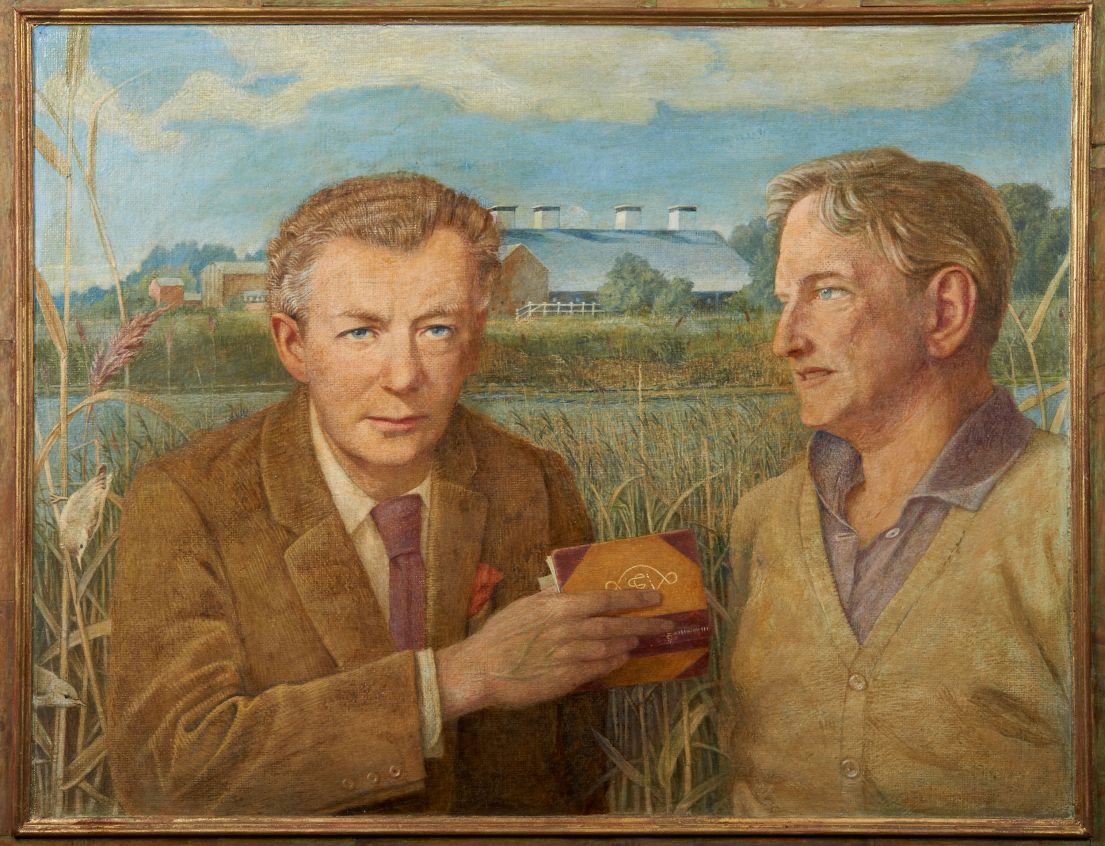 'Double Concerto' by Maxwell Armfield, 1968, showing Benjamin Britten and Peter Pears in front of the concert hall they founded at Snape Maltings

Benjamin Britten and Peter Pears – composer and singer – were partners for nearly forty years: from the late 1930s, when they were in their late twenties, until Britten’s death in 1976. 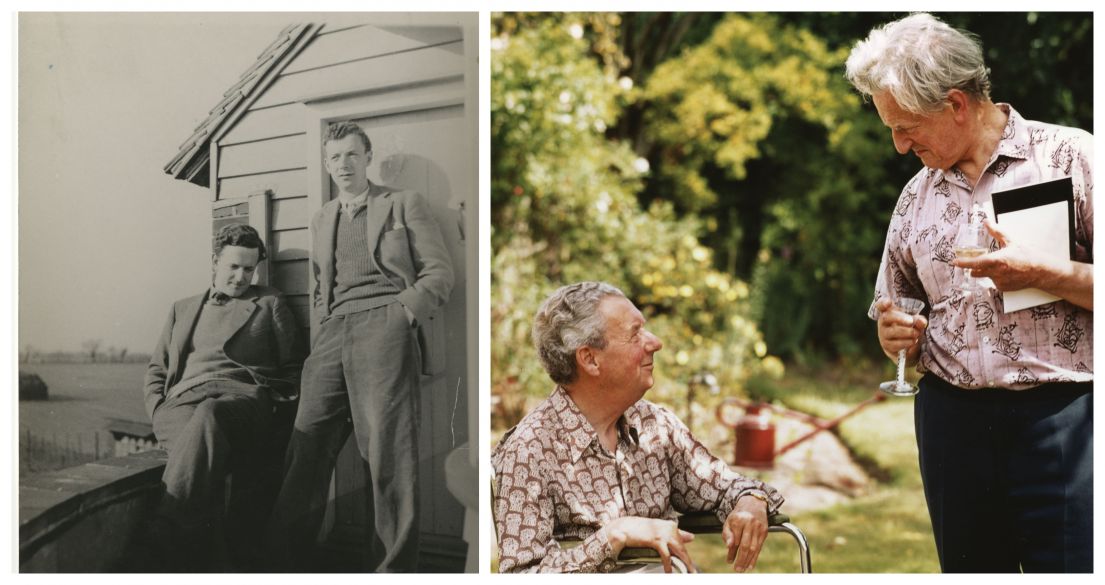 Britten & Pears together at Snape in the early 1940s, and in their garden at The Red House in 1976 / © Britten Pears Arts

Pears made his name as a singer in works composed by Britten: Britten was often Pears’ accompanist, and shaped his works for the distinctive features of Pears’ voice.  Close study of Britten’s music reveals how symbiotic their relationship was: as Pears grew older, his voice deepened, and correspondingly the works Britten wrote for tenor slide down the scale to inhabit the lower end of the range.  They travelled together, performed together, chose repertoire together, but their partnership was not merely professional: they were two gay men in a life partnership, a long marriage by any other name.  It was also, for much of their lives, illegal: when the 1967 Sexual Offences Act partially decriminalised male homosexuality they had already been together for nearly thirty years, thirty years of fulfilling partnership but also of subterfuge, ambiguity and the need to watch every movement.

Much of that life together was spent in Britten’s native Suffolk, in Aldeburgh.  In 1957 they moved to The Red House, a large former farmhouse on the edge of the town, and lived there for the rest of their lives. The Red House is open to visitors and the house and its collections – the domestic environment, the books, the artworks and, housed in a separate building in the grounds, the extensive archive – tell the story of the two men’s long loving relationship.

Britten’s orchestral arrangement of Schubert’s The Trout, 1942: the notation is in Britten’s hand and the words were written out by Pears

More than a muse

Their relationship is woven through their professional work, through the pieces that Britten wrote for Pears to sing.  There are pieces through which a gay male passion could be expressed in coded or not-so-coded terms: the song cycle Seven Sonnets of Michaelangelo, in which the original Italian poems are an expression of gay love, or Canticle I, “My Beloved is Mine and I am His”, where the words of the Song of Solomon take on an extra resonance from their being sung by a male voice.  In their work the relationship between composer and singer was not all in one direction: Pears was heavily involved in the preliminary discussions that shaped Britten’s work.  The archive contains many of the source works that fed into Britten’s operas and song-cycles – works by George Crabbe, William Shakespeare, Henry James, Thomas Hardy, and more – and these copies are often marked up to show which lines will be kept and which cut.  Pears’ handwriting and Britten’s occur together as the two men collaborated to shape the raw material.  Similarly, in the finished scores of vocal work we often see the handwriting of both men, with the singer filling in the words (in some cases, even in pieces intended for other voices such as soprano).  Pears was no passive muse, the archive makes clear, but an active collaborator.

The archive holds not just their professional work, of course, but detailed documentation of their domestic existence.  As self-employed men, they were required to submit detailed statements of income and expenditure to the tax authorities every year, and to keep evidence that would back up these assertions if they were audited.  As a result they kept receipts and detailed records of their purchases, and their years at The Red House are documented in great detail.  However, as a gay couple at a time that their relationship was illegal, Britten and Pears needed to maintain plausible deniability in their financial documentation – an audit might reveal that their partnership was more than just professional.  The two men never had a joint bank account or held property in common, and the receipts show them carefully reimbursing one another for purchases and moving money between their separate accounts: as, for instance, in a receipt summarising Britten’s clothes purchases in late 1965, in which one line carefully notes that he paid for Pears’ shoes to be repaired and will presumably be reclaiming the money.

However, although the two men specified carefully in all relevant legal documents that they had no property in common, the thousands of books in their collection – held in the house, the adjacent Library and within the archive – almost all bear a bookplate with their two names together, a bookplate that Britten commissioned for Pears’ sixtieth birthday.

One painting in the Red House sums up their joint lives.  “Double Concerto” by Maxwell Armfield shows the two men on a bench outside Snape Maltings, their concert hall.  Pears turns towards Britten but his shoulder has a strange, amputated look and there are traces of paint beneath the reedbeds between them.  In the original, Pears’ arm was there, behind Britten’s shoulders; although this was painted in 1968, after decriminalisation, Britten was uncomfortable with this public display and Armfield painted out the arm.  The world was perhaps not yet ready then for the two men’s partnership to be public in all its aspects.  But that painting now, and the story behind it, is the first thing that greets visitors to the Red House: their long marriage now acknowledged and celebrated.