From chocolate worms to hair-raising gadgets and back to front furniture, a rummage amongst the collections of the National Trust doesn't always turn up what you expect! Assistant Curator, Katie Knowles is working on an exciting new book highlighting the curious inventions amongst the collection. Look out for it this autumn, but grab a cuppa and take 5 with us now for a sneak peak at some of the things she's found!

For thousands of years humans have used curiosity and creativity to shape the world around them and meet their changing needs. The National Trust cares for places where significant discoveries occurred that helped shape the modern world, or whose owners and residents were early adopters of new technologies. At Lacock in Wiltshire the photographic negative was invented and refined by William Fox Talbot, while Cragside in Northumberland was the first house in the world to be lit by hydroelectricity using Joseph Swan’s newly developed lightbulbs. Yet invention is not necessarily about coming up with a completely new idea. It can also be about improving or adapting an existing design. The inventions featured below may seem curious, but some are early examples of objects still in daily use. Together, they help us explore the history of social and technological changes that have affected us all. 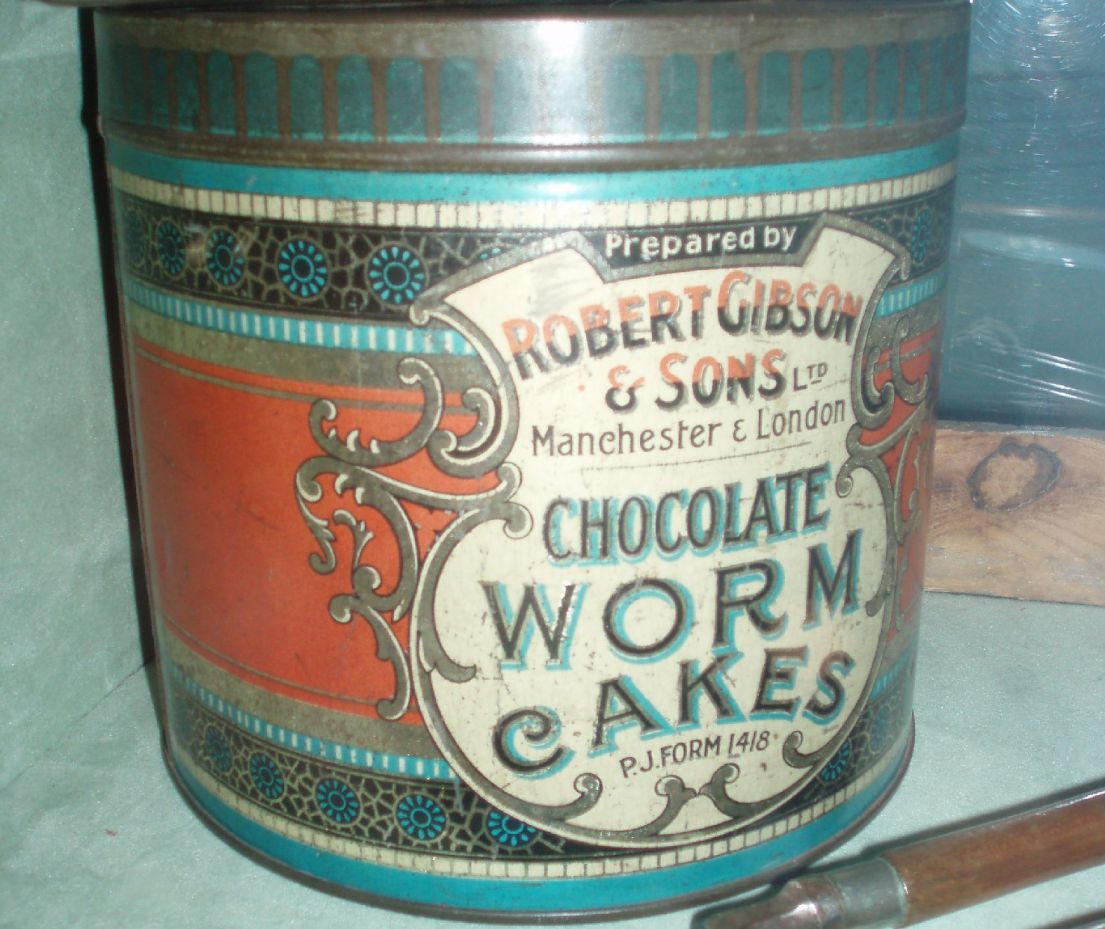 We all know a 'spoonful of sugar' helps the medicine go down! How about some spiced cakes to treat worms? / © National Trust

The 19th and 20th centuries saw great advances in medical knowledge. Many new medicines were available over the counter, like these chocolate worm cakes, which treated intestinal worm infestations (often transmitted by infected food). The small ‘cakes’ or tablets were made with cinnamon and compounds of poisonous mercury, which destroyed the parasitic worms. The colourful tin is designed to stand out on the shelf and tempt customers, particularly those unable to afford expensive prescriptions. Today it is part of the collection at the National Trust’s Museum of Childhood, which examines the escapades and challenges of childhood through the centuries. (Catalogue reference - NT 662630) 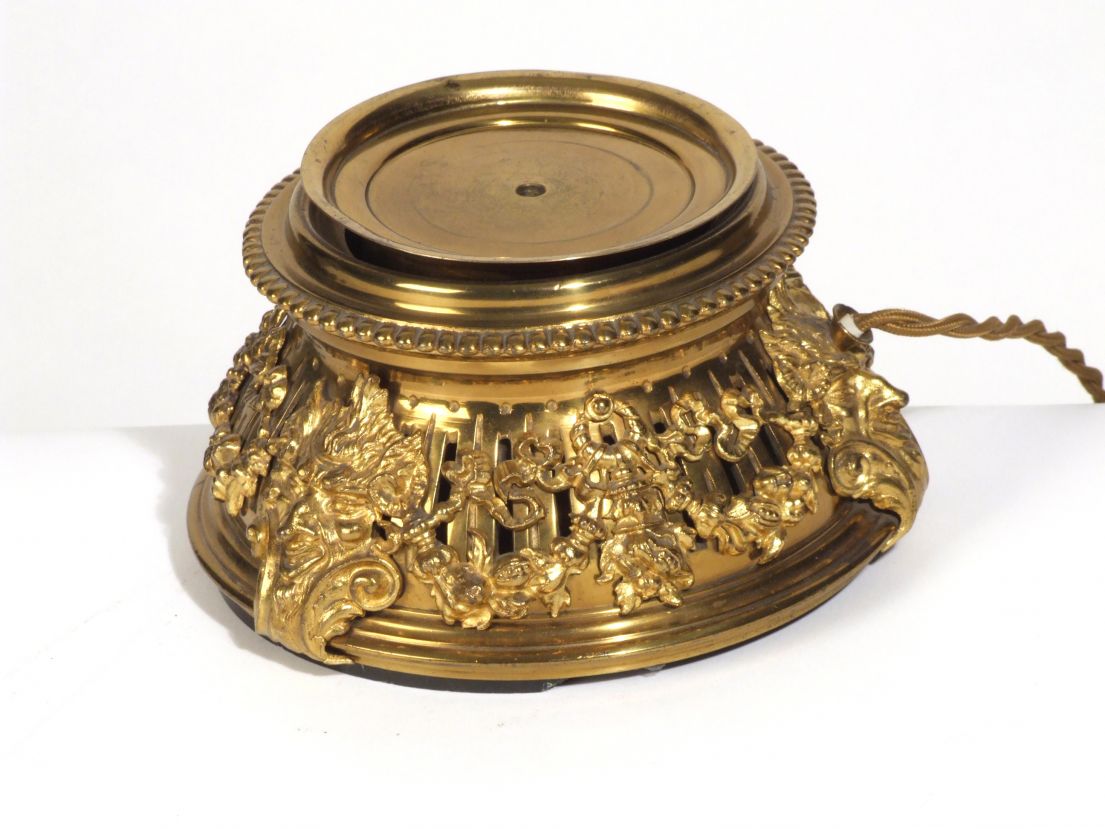 Tired of your tea going cold? Never fear, there's an invention for that, and this one was powered by hydro-electricity / © National Trust

This electric cup warmer was one of many modern comforts enjoyed by entrepreneur and millionaire Julius Drewe in his family home, Castle Drogo in Devon. Drewe began work as a tea-merchant in China and opened the Willow Pattern Tea Store in Liverpool, before founding the Home and Colonial grocery chain in 1883. The business was so successful that he was able to retire at the age of 33. Drewe loved gadgets and this ornate warmer (probably made in the 1920s or 30s) was designed to keep a cup of tea hot. Unlike earlier food warmers heated with candle flame, this handy invention was powered using hydroelectricity generated in the valley below the castle. (Catalogue reference - NT 902809)

The hair-raising metal gadget at Wightwick Manor near Wolverhampton may look like a weapon but is actually a Victorian brush hair dryer (see top image). Unlike modern hairdryers powered by electricity, this was filled with hot water and brushed repeatedly through hair to dry it. It was one of many hair and beauty-related inventions developed in the 19th century during a boom in manufacturing and innovation. (Catalogue reference - NT 1288759) 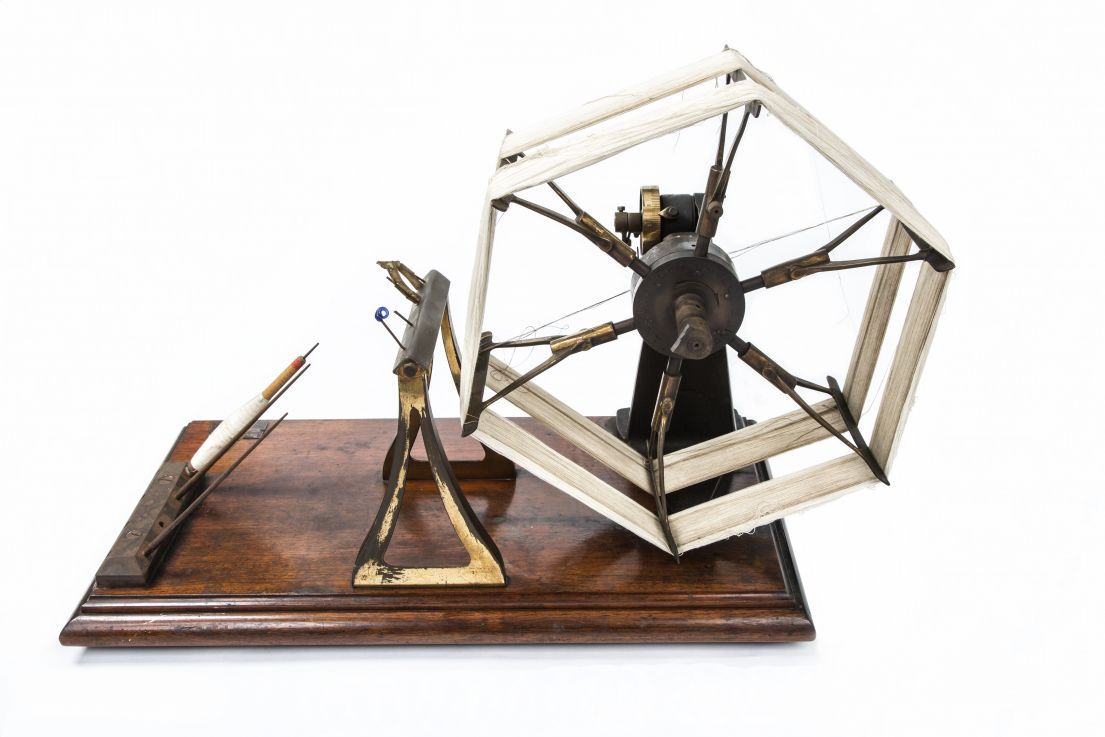 Models like this, a wrap wheel from Quarry Bank's Testing Room, are vital to the invention process / © National Trust

The invention of the water frame by Richard Arkwright in 1767 revolutionised textile production. It shifted work away from skilled hand-weavers at home to mass manufacturing in vast factories. Mills like Quarry Bank in Cheshire – founded by entrepreneur Samuel Greg in 1784 – used the new water- and steam-powered machines to spin yarn and produce cloth in huge quantities. By the 1890s Quarry Bank had its own testing room, with gadgets like this wrap wheel for quality-checking incoming and outgoing yarn and cloth. When the handle is turned, a standard length of yarn is wound evenly around the frame, ready to be assessed and weighed. Quarry Bank is a remarkable survival of an industrial age, complete with village and Apprentice House, and you can still see, hear and feel machines at work today.  (Catalogue reference - NT 1454070)

With leather upholstery and a 3.5 horsepower engine, this 1900 Benz at Tatton Park in Cheshire was cutting-edge technology of its time. Steam engines had been used since the 1700s to power road vehicles, but in 1886 a German engineer, Karl Benz patented the world’s first automobile. It used an internal-combustion engine, which burned fuel inside the engine, rather than in an external furnace. Benz sold licenses for this new technology to other manufacturers, changing transport forever. This car was bought by car enthusiast Maurice Egerton, 4th Baron Egerton of Tatton in the early 1900s. (Catalogue reference - NT 1298849) 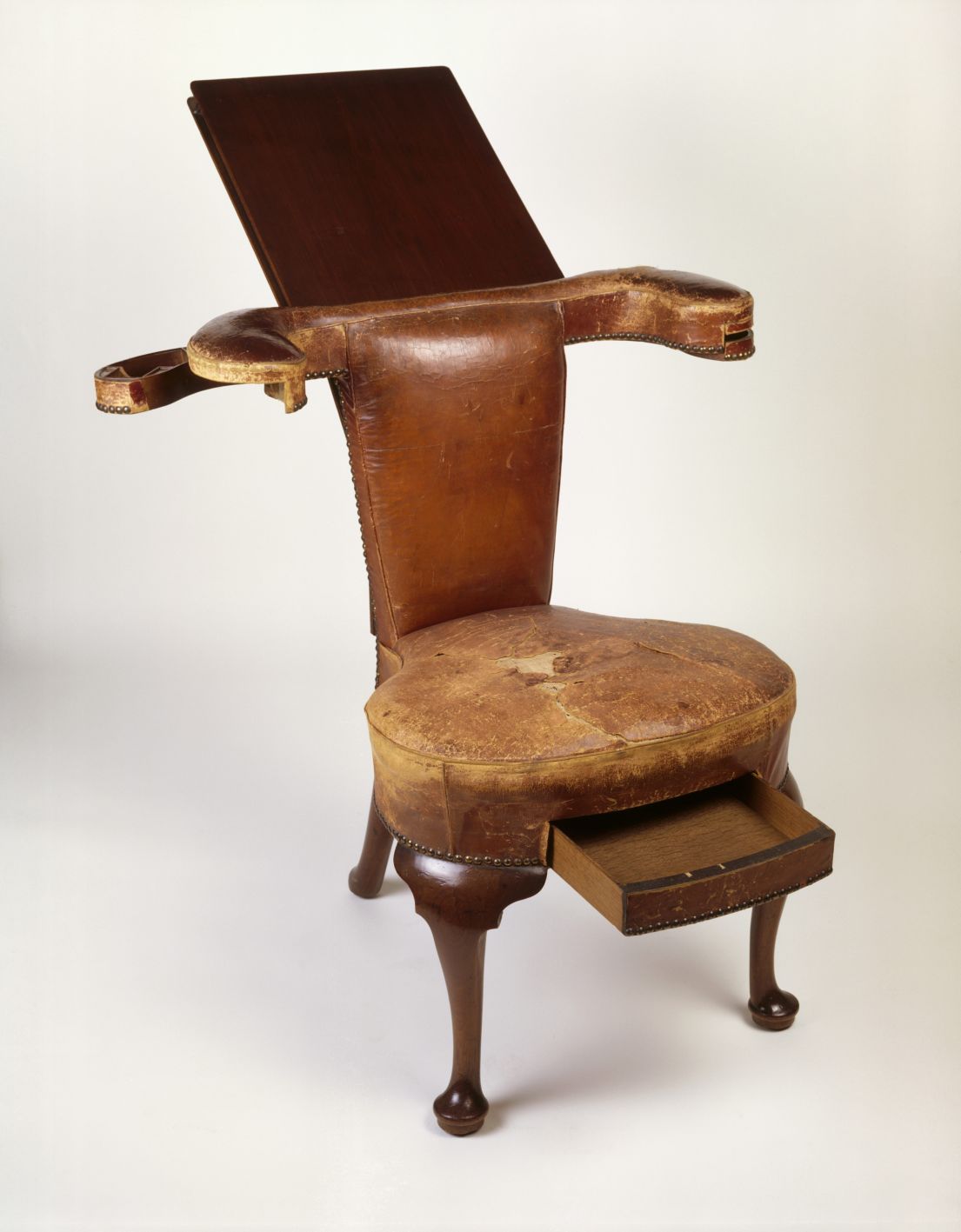 Are you sitting comfortably? This intriguing furniture design would be found in a Georgian library / © National Trust

Back to front furniture

If you like drawing or reading, this chair at Kedleston Hall in Derbyshire could be perfect for you. The user sits back-to-front on the seat, resting their arms on the comfortable padded rail and facing the angled wooden slope. Paper or books were rested on the slope, with compartments for paints or ink tucked under the seat and arms. This chair dates to about 1730, but similar designs were still being made almost a century later. It’s an example of the Georgian’s love of metamorphic or multi-purpose furniture, which is often found in libraries. (Catalogue reference - NT 108612)

Katie Knowles is Assistant National Curator for Engagement at the National Trust. She is fascinated by the apparently ordinary and often curious objects in the National Trust collections. She is currently writing a new book on 100 Curiosities and Inventions with contributions by fellow curators, due to be published in autumn 2022.