Bring us some figgy pudding! In the red corner is a Medieval mash up, in the tinsel bedecked corner a Regency favourite! Are you ready for the contest of the season? Yes, Regency Cook, Paul Couchman is here to bring you history's contenders for the coveted Christmas title! Which pudding will stay the course?!

In Britain the Christmas pudding is falling out of favour. People say it is too stodgy, too heavy, too much. I say, bring us some figgy pudding! 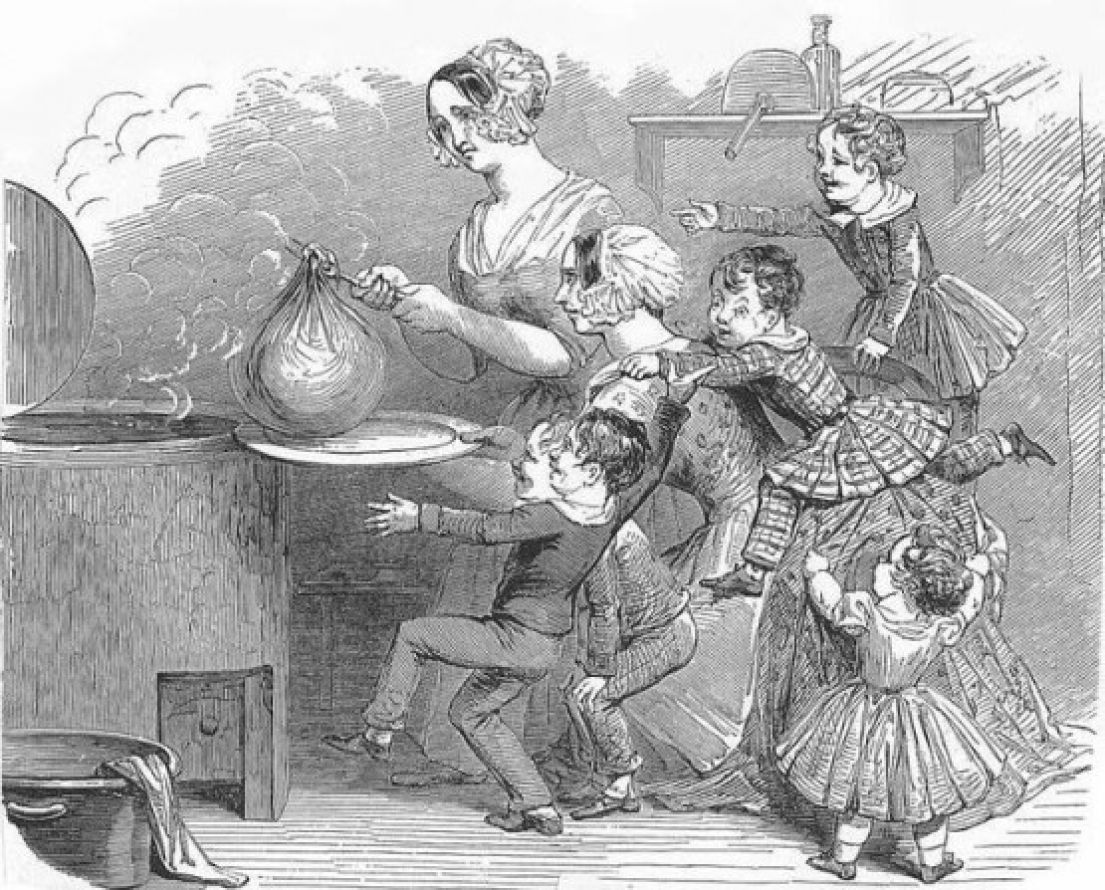 The pudding cloth revolutionised cooking - it's why we have a sweet figgy pud instead of a savoury one!

At this point I could tell you a simple tale of the Christmas pudding’s long history.

It would start with a porridge made with meat, dried fruit, thickened with breadcrumbs and flavoured with some exotic spices.

Then I’d tell you about the discovery of the pudding cloth. This innovation meant that puddings didn’t have to be cooked in intestines or skins anymore. So the plum porridge mixture could be enjoyed as glorious pudding without any meat, just suet.

I’d then tell you how this sweetened pudding cooked in this pudding cloth was at first savoury, served with beef as a second course but then became a pudding strictly associated with dessert.

But if I just told you that tale you’d be missing out on a lot of fun!

The Christmas pudding’s rise and then fall doesn’t go in straight lines. Indeed it could be said, that over the centuries, there was a Pudding Fight. So this is the tale of four puddings fighting to the death.

Spoiler. Only one will survive! 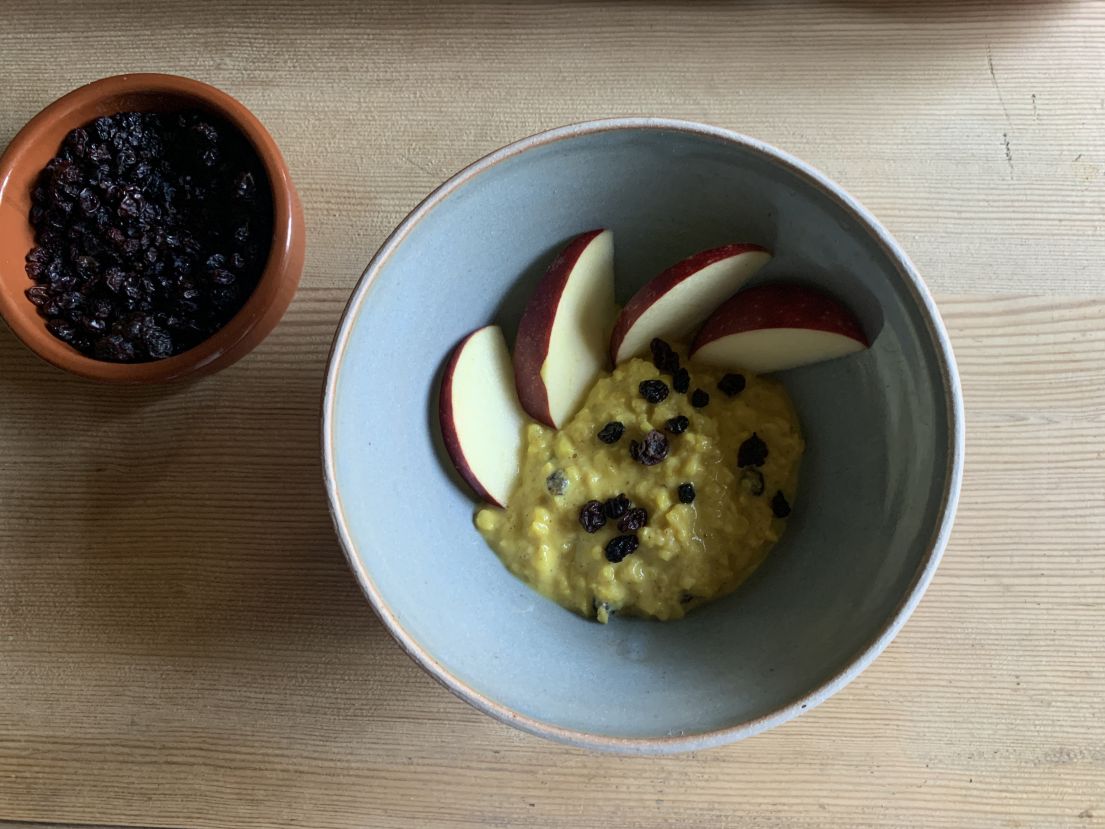 Frumerty - a Medieval treat, plain or 'pimped' up, what would you prefer? / © Paul Couchman

Let me take you to medieval England for our first contender; enter the ring… Frumerty.

In its simplest form it is grains, often wheat, mixed with water or milk cooked in a pot and thickened with breadcrumbs eaten by the poor. But this simple dish was made into a dish fit for festive occasions. Like the extended Christmas period.

To pimp up frumerty it was sweetened with expensive medieval sugar and flavoured by expensive spices such as saffron. The poor version is just thickened with breadcrumbs but if you were rich, egg yolks, dried fruit and cream were added.

It’s a festive recipe known since Richard II’s time. The rich wouldn’t eat it by itself but serve it alongside expensive meat or fish. Frumerty doesn’t disappear from Christmas tables when Plum Pudding appears though. No. It’s eaten in the centuries that follow and right up to 1822 when a newspaper reports: 'The yule candle is lighted, and a supper is served, of which one dish from the lordly Mansion to the humblest shed, is invariably Frumerty.' 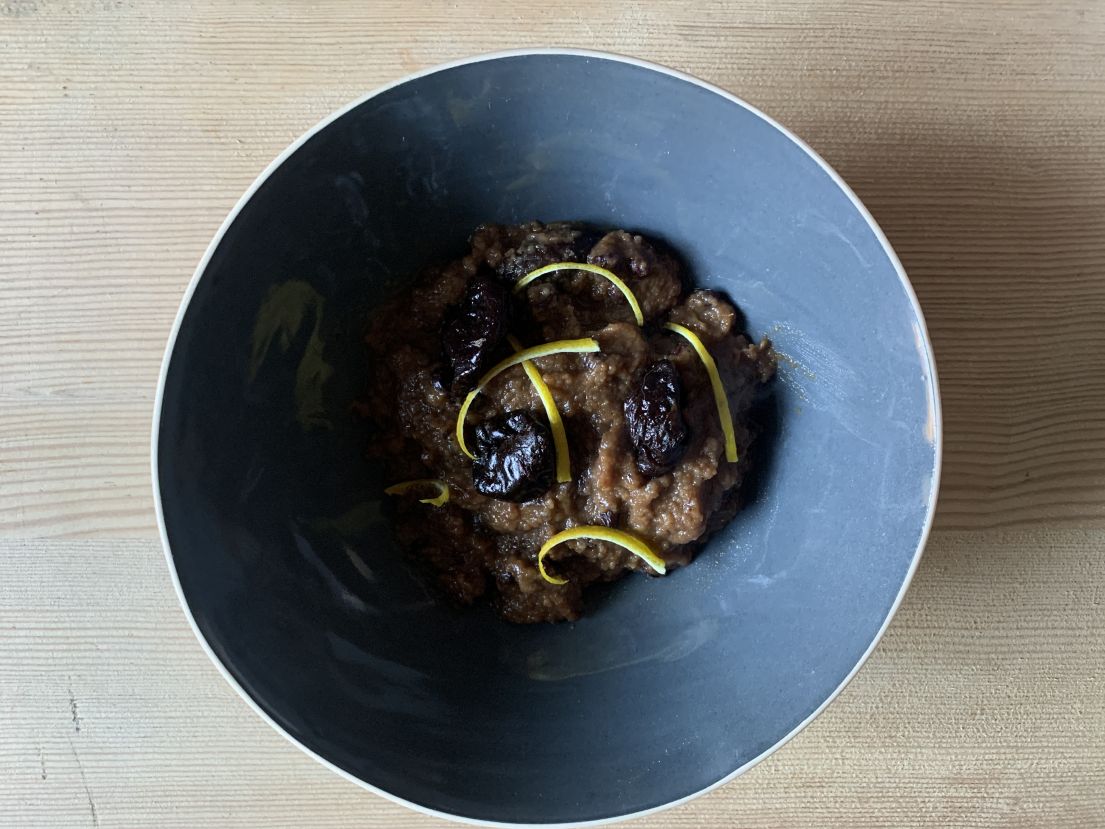 The next contender to enter the ring is… Plum Pottage.

Plum pottage was, in its earlier form, like frumerty, served at special occasions and Christmas. It started off as ‘Stewed Beef to potage’ in the early 1400s. Bits of beef boiled in a little water and a lot of wine with minced onions and fine herbs. Thickened with bread it was seasoned with cloves, cinnamon and mace… and currants were added. To this basic pottage Prunes were added in the Elizabethan period. Hence the name.

By the 1600s the herbs were dropped and in Robert May’s ‘Accomplisht Cook’ this stewed broth appears as a festive dish on All Saints Day, New Year’s Day and, most importantly, Christmas Day. In 1673 William Rabisha lists it as a Christmas dish and it became later known as Christmas Broth or Plum Pottage. One of the last recipes for Plum Pottage appears in 1826 and it is said that it lingered longer in Scotland than anywhere else. 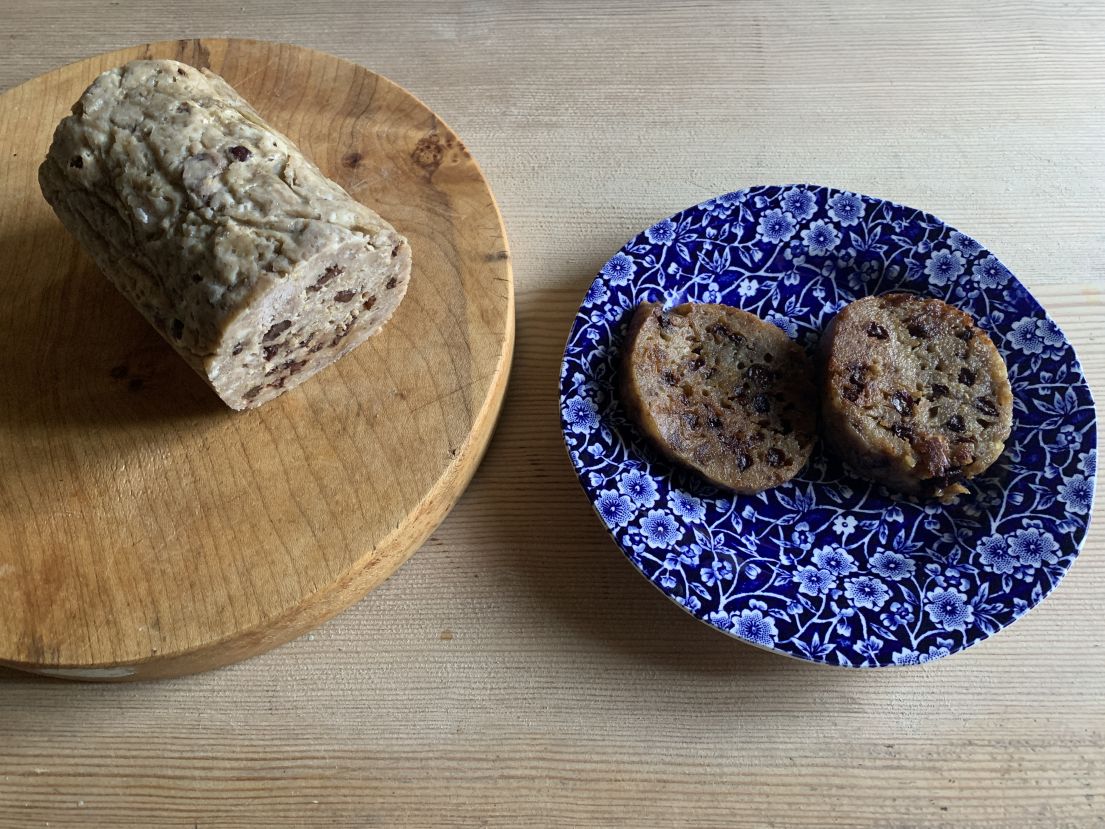 "It is a custom with us every Christmas-Day in the Morning, to have, what we call an Hackin…” - 1790 Bradley / © Paul Couchman

It’s a sweet haggis-type pudding of minced beef with oats, sugar and fruit, boiled in a large gut bag.

This pudding was eaten at Christmas throughout the 18th and 19th centuries. But by 1878 it would seem the custom had almost died out. William Dickinson in 1878 writes that Hackin pudding is:  ‘A pudding of mincemeat and fruit used till lately for family breakfast on Christmas Day.’ 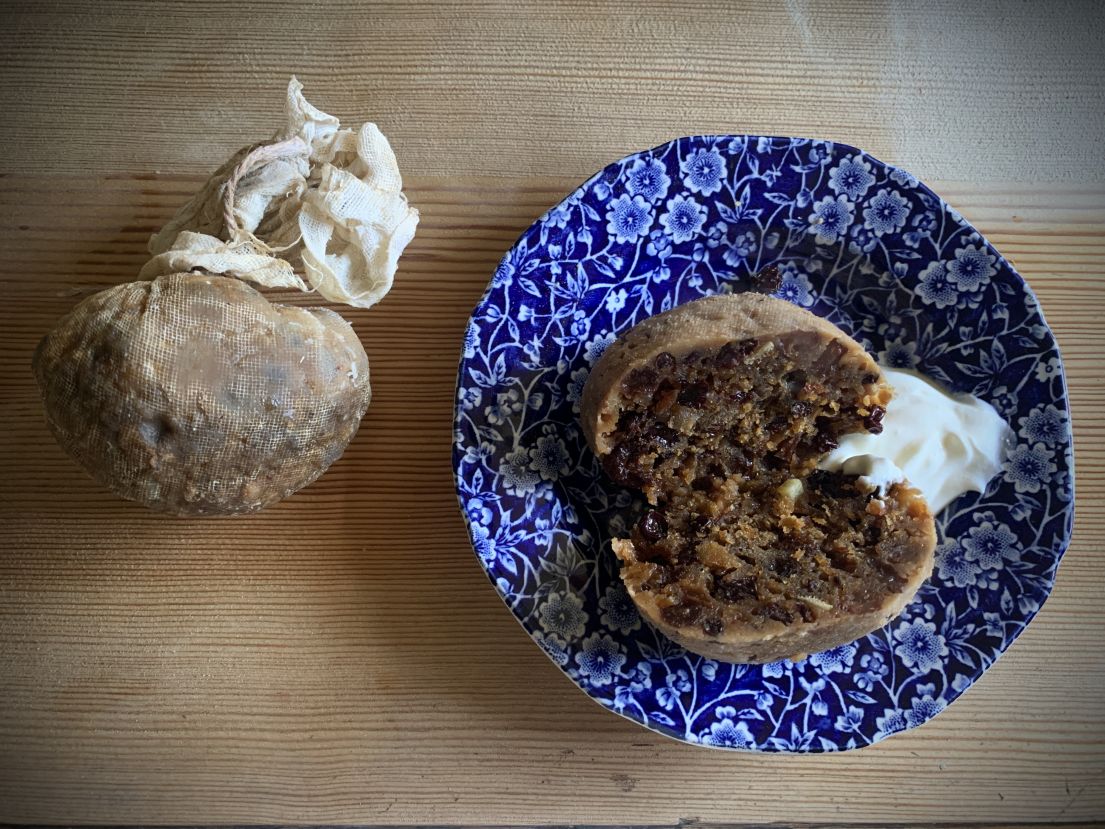 And now my last pudding contender stands before you in the ring. One that’s still standing today... Plum Pudding.

I’m an 1820s Regency cook and I like this lighter plum pudding which would have been popular in the kitchen I work in at The Regency Town House in Hove. Though it might have still been served with beef as a second course. The recipe from Eliza Acton is still my favourite and the one I cook in my online classes. 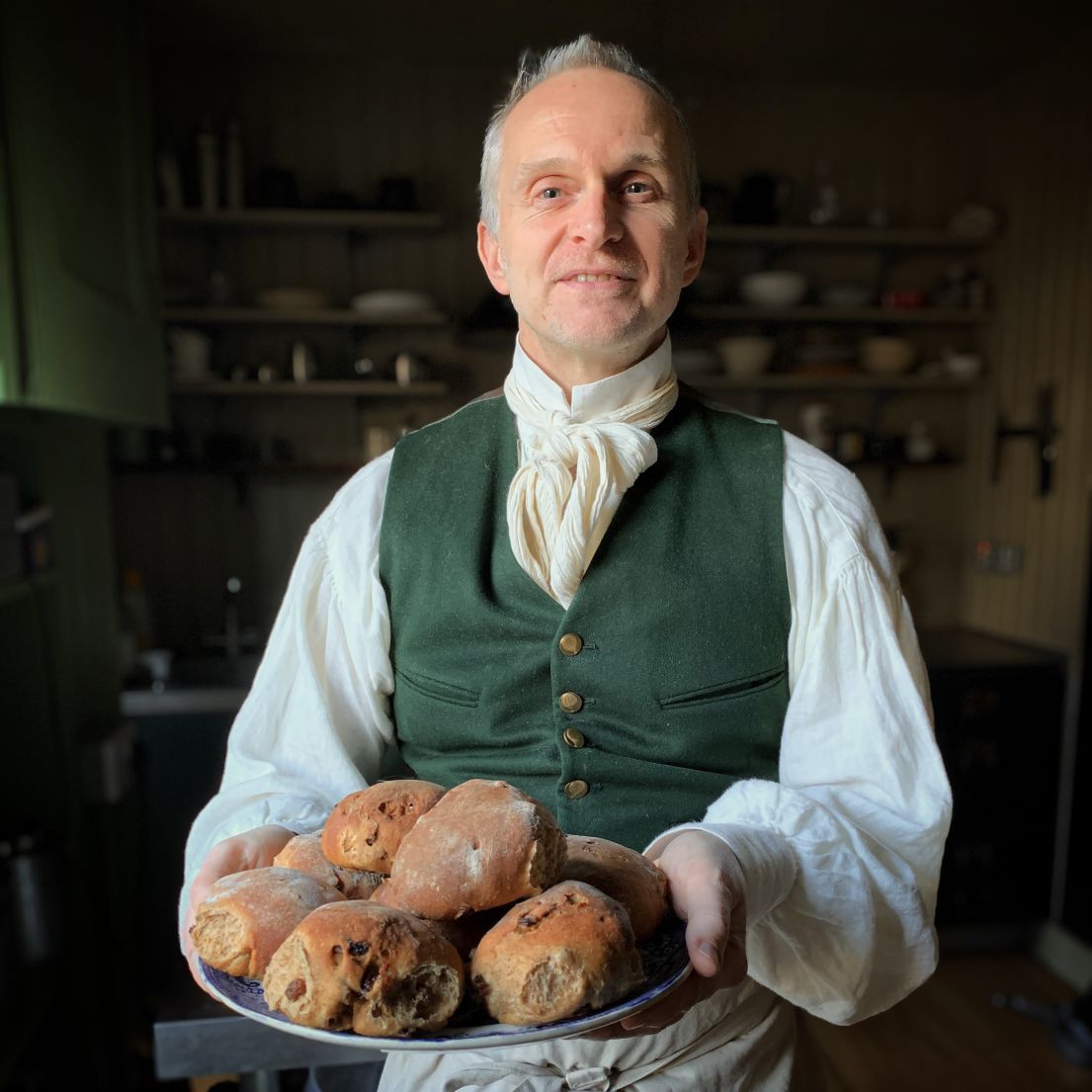 Four puddings have stood before you: Frumerty, Plum Pottage, Hackin Pudding and Plum Pudding. But which wins the contest?

It might surprise you, but I don’t recommend the Plum Pottage. Quite horrid. Let’s keep that one consigned to history. But I will be tucking into Frumerty, Hackin Pudding and, as always, Eliza Acton’s Plum Pudding.

I, for one, won’t be giving Christmas pudding a miss this year - it’s not too stodgy, it’s not too heavy and it’s NEVER too much.

This year's festival theme has been Edible England, so do check out our other tempting posts: