A world turned upside down and mysterious stones that may have marked the burial of a heart... Clare Kirk from Friends of Friendless Churches is back with us to share more tantalising tales, this time of curious carvings to be found inside their historic buildings. 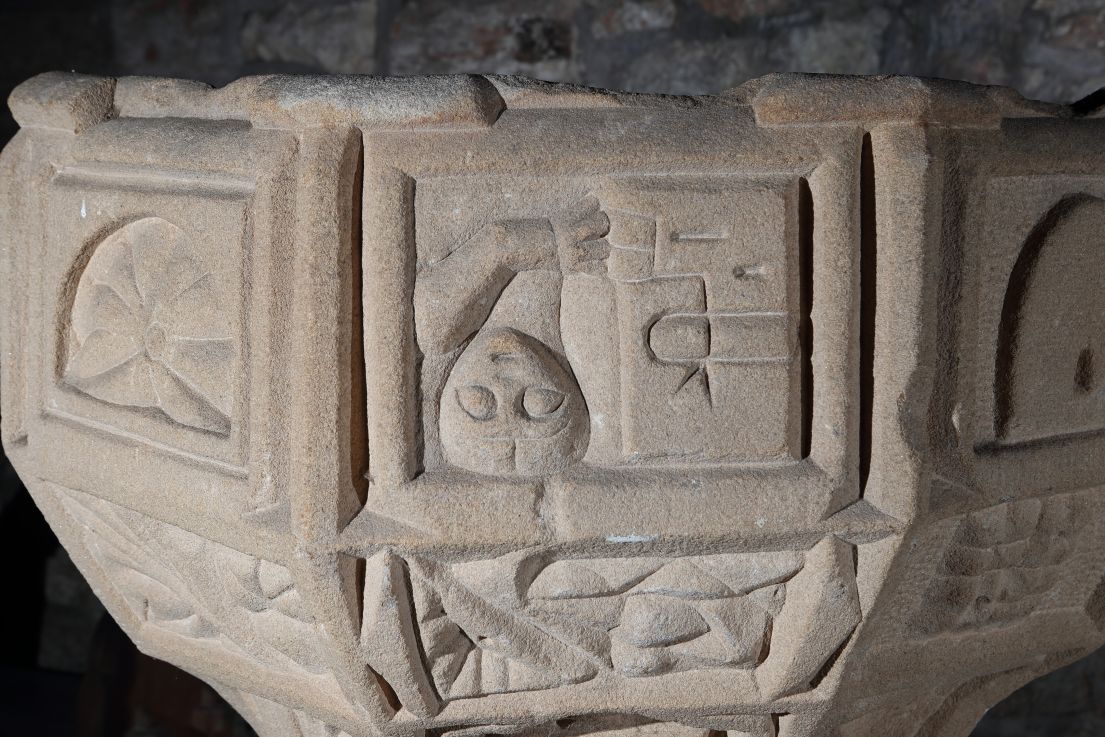 All Saints, Ballidon: Has the world turned upside down? © C B Newham

Many of our churches are more than 500 years old. If only walls could talk, what tales they could tell! Sadly, our walls are silent (except perhaps for the sounds of roosting birds or bats!). But people from the past have made their mark on the walls, the floors, and the furnishings — leaving intriguing clues to their beliefs and poignant traces of their lives. Here are three churches where you can spot ancient symbols in stone, from the familiar to the downright puzzling! 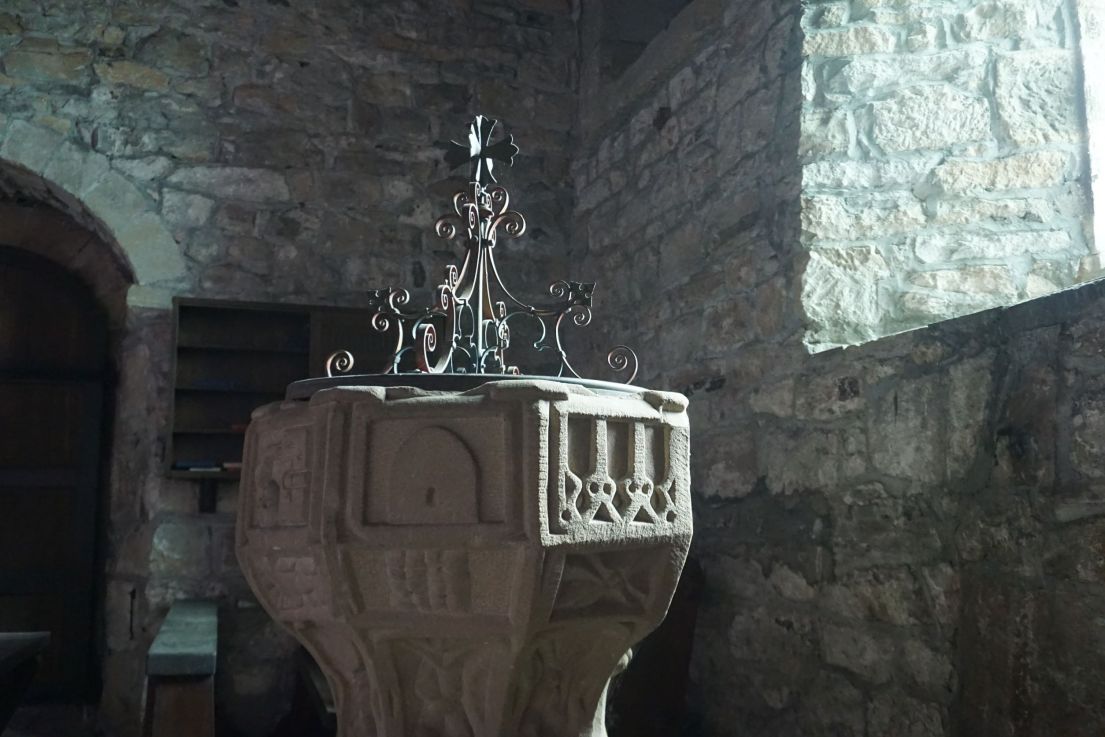 Ballidon is an area of great antiquity. There are remains of Neolithic settlements, Bronze Age barrows and Roman ponds. The only true survival is the small church, with 12th century origins, perched on a craggy plinth in the vast open field of a deserted medieval village.

The font here dates from the 14th century and it’s very unusual. An octagonal shape, it’s carved with tracery (designs that look like stained-glass windows), figures, fish, a bridled horse and a Sheela-na-gig. What’s really puzzling is that several of these carvings seem to be upside down!

The panel with a face is particularly odd. It's been suggested that he's holding a map, a computer mouse or plans to build a bioreactor/heat exchanger ...

As well as an upside-down font, Ballidon has a fireplace high up on a wall. According to local tradition, there was once a gallery here with a room for visiting clergy to stay overnight. 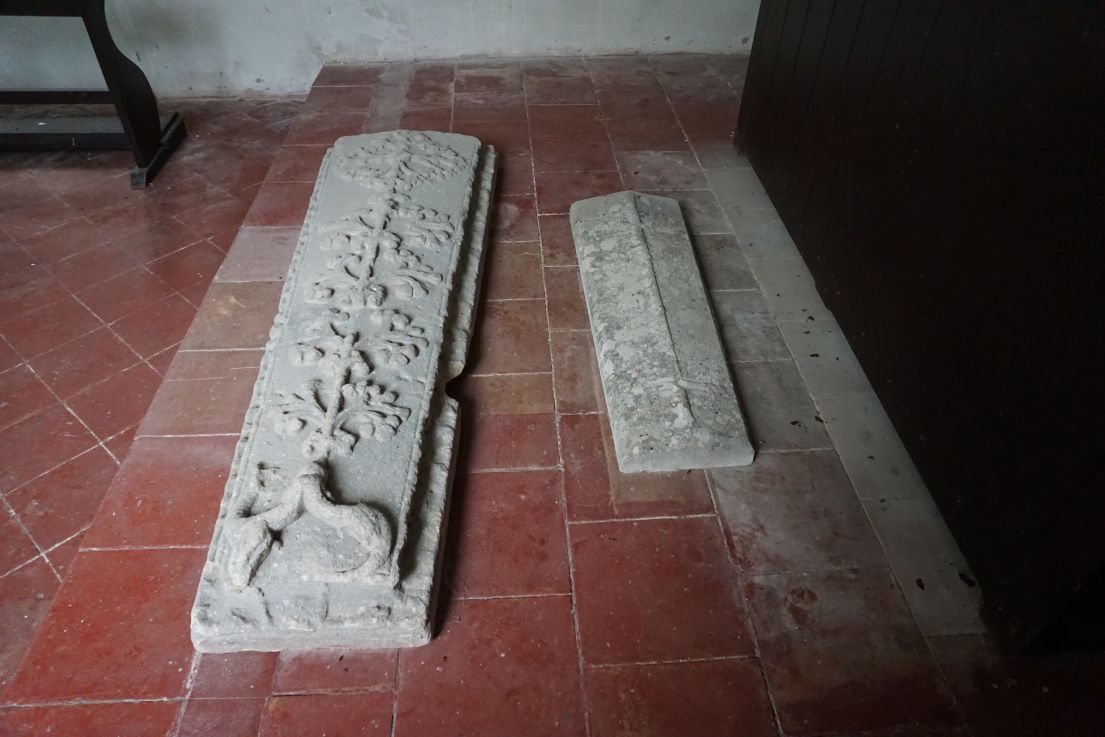 St Mary, Fordham: Mystery stones that are older than the church / © FoFC

Inside this 14th century church built from the local ‘gingerbread’ stone there are two remarkable objects that really shouldn't be there.

On the altar steps are two carved slabs of stone that appear to be coffin lids. The larger stone is beautifully decorated. At one end of the carved cross, toothy wyverns are chewing on the intricate vine. The other stone is much smaller. It could perhaps have been for a child. But it’s also possible that it marked the burial of a heart. Heart burials were practised in the medieval period for a number of reasons, including for men who died in the crusades —where only this small but precious part of them could be sent home.

Both of these puzzling stones are older than the building — they date from the 12th and 13th centuries. Where they came from and who they were for is, for now, a complete mystery. 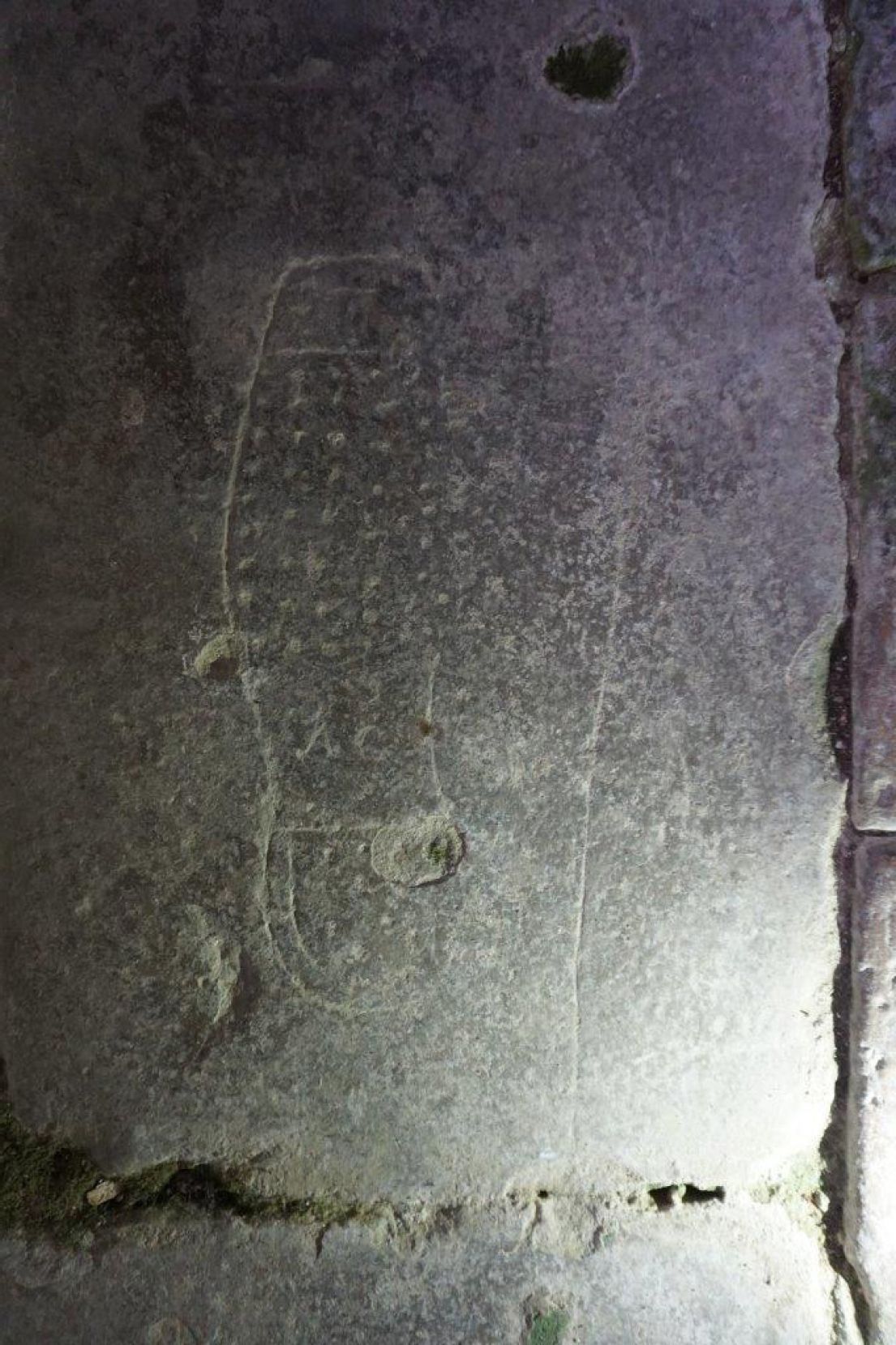 St Mary Magdalene, Caldecote: Step into someone's shoes from the past / © FoFC

Surfaces full of symbolism (and graffiti!)

On the octagonal medieval font at St Mary's you’ll find small circular hollows where the stone was ground out. The stone dust, which was seen as carrying God's blessing, was mixed with wine or water and drunk as a cure-all. The villagers of Caldecote may have put their faith in the healing power of this stone when the village was badly struck by the Black Death in the 14th century. By 1428 there were fewer than ten villagers remaining, and it soon became one of England's 3000 deserted medieval villages.

This ancient church also reveals other signs of age-old superstitions and religious devotion in its walls and floors. Medieval and later 'graffiti' throughout the inside of the building includes a Solomon's knot, daisy wheels, crosses, and many other symbols. If I had to choose a favourite, it would be the graffiti shoes in the porch. Their style dates them to the 17th-18th centuries, and each one has been 'signed' with the initials of its maker. As you enter the church and stand on those stone footprints, it's tantalising to imagine the person who drew around their shoes there, centuries before you.

Clare is a freelance marketing consultant with a passion for history and archaeology. Digging for long-forgotten stories is her happy place! Clare has worked as the Digital Content Creator for the Friends of Friendless Churches since 2020. She also works as a genealogist and is a trustee of Cotswold Archaeology.