Curious Collections of the National Trust

A wooden pet, a grenade that looks like a perfume bottle and a prosthetic leg for dancing - not what immediately comes to mind when I think of things the National Trust holds in its collections. But chatting about archival treasures by the tea point one day Katie Knowles, one of the Trust's Assistant Curators gave me a new perspective. The stories are too good not to share, so of course I asked her to introduce us all to the quirky side of the Trust's collection, over to you Katie... 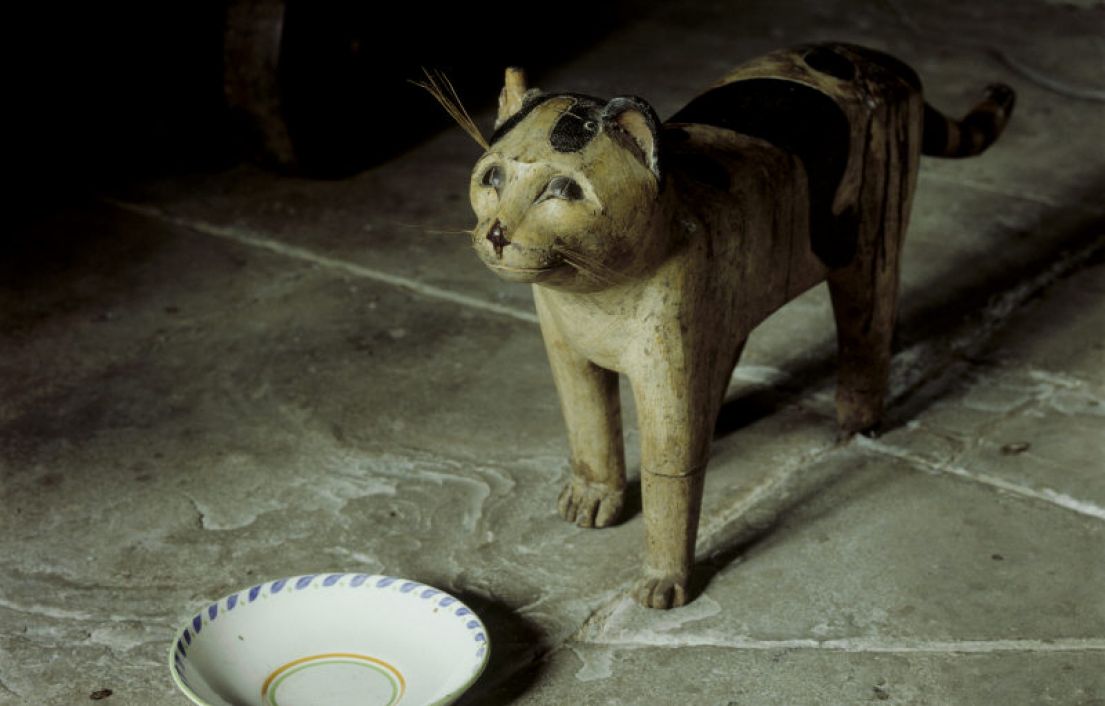 A wooden cat with replaceable whiskers for a loving but perhaps unreliable owner! One of many intriguing items in the National Trust's collection. © National Trust Images/Andreas von Einsiedel

When you think about the National Trust’s collections, I wonder what comes to mind first? It might be the paintings - more than 13,000 of them - including masterpieces by artists such as Canaletto, Rembrandt, Gainsborough and Reynolds. It might be the internationally-significant Thomas Chippendale furniture, or the precious Chinese ceramics, or some of the half a million books in Trust libraries. But what about rocking horses, or scrubbing brushes, or jewellery? How about a Dalek (or two!), taxidermy fish or Bakelite electric “hot water” bottles? The National Trust collection is all this and more and part of my job as Assistant Curator for Collections is to help share these riches with as many people as possible.

We look after over one million items at over 200 places across England, Wales and Northern Ireland. The collection spans continents and centuries, with everything from Egyptian tablets to 21st century sculpture. But what makes our collections particularly special is their context. Unlike many museums, we often look after these objects in the places they were made or bought for and used in. This means we can tell an even richer story about these objects or the people who commissioned, bought or used them. And every object tells a story, whether it is a Rembrandt self-portrait, the paint box used by Winston Churchill or one of the thousands of everyday items that are part of the lives of our properties. And then, there are the quirky, intriguing or downright bizarre objects… 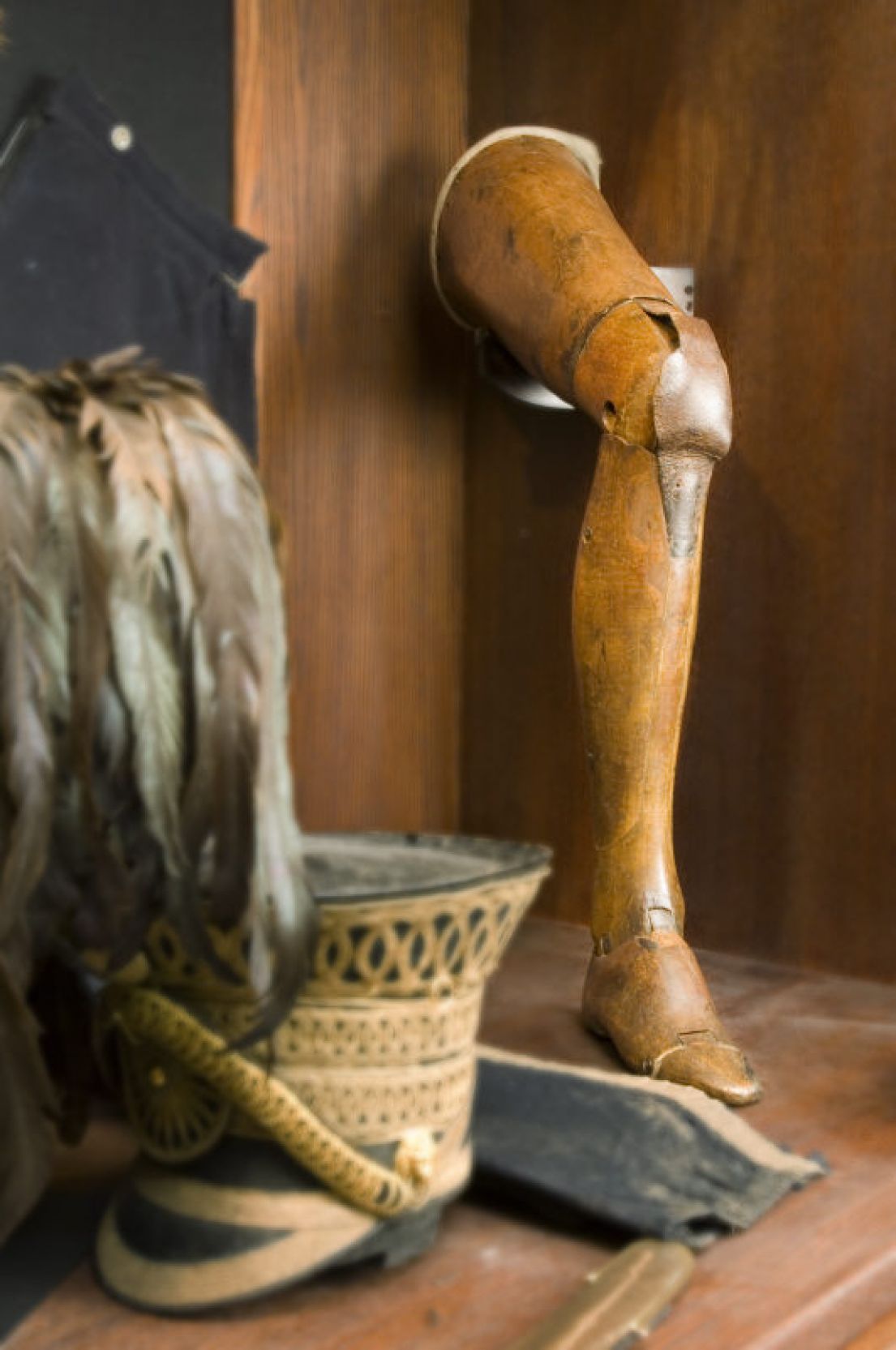 In a corner of the display cabinet at Plas Newydd, on Anglesey, is this wooden leg. Known as 'The Anglesey Leg', this was the world’s first articulated prosthetic leg (meaning that it has a hinge that allows it to bend). It was invented by James Potts of Chelsea and was one of the wooden legs belonging to Henry Paget, the Marquess of Anglesey. As it could bend, he was able to wear it for dancing and riding.

Paget lost his right leg while leading the charge of the heavy cavalry during the Battle of Waterloo on 18 June 1815. Legend has it that he turned to the Duke of Wellington and said, ‘By God Sir, I’ve lost my leg,’ to which the Duke replied, ‘By God Sir, so you have!’ Paget was taken off the battlefield to have surgery in a nearby house owned by a Monsieur Paris. During surgery he allegedly joked with the surgeon about the bluntness of his knives. The remains of his amputated leg were kept by Monsieur Paris and buried in the garden in a tiny coffin with a tombstone, becoming a visitor attraction. 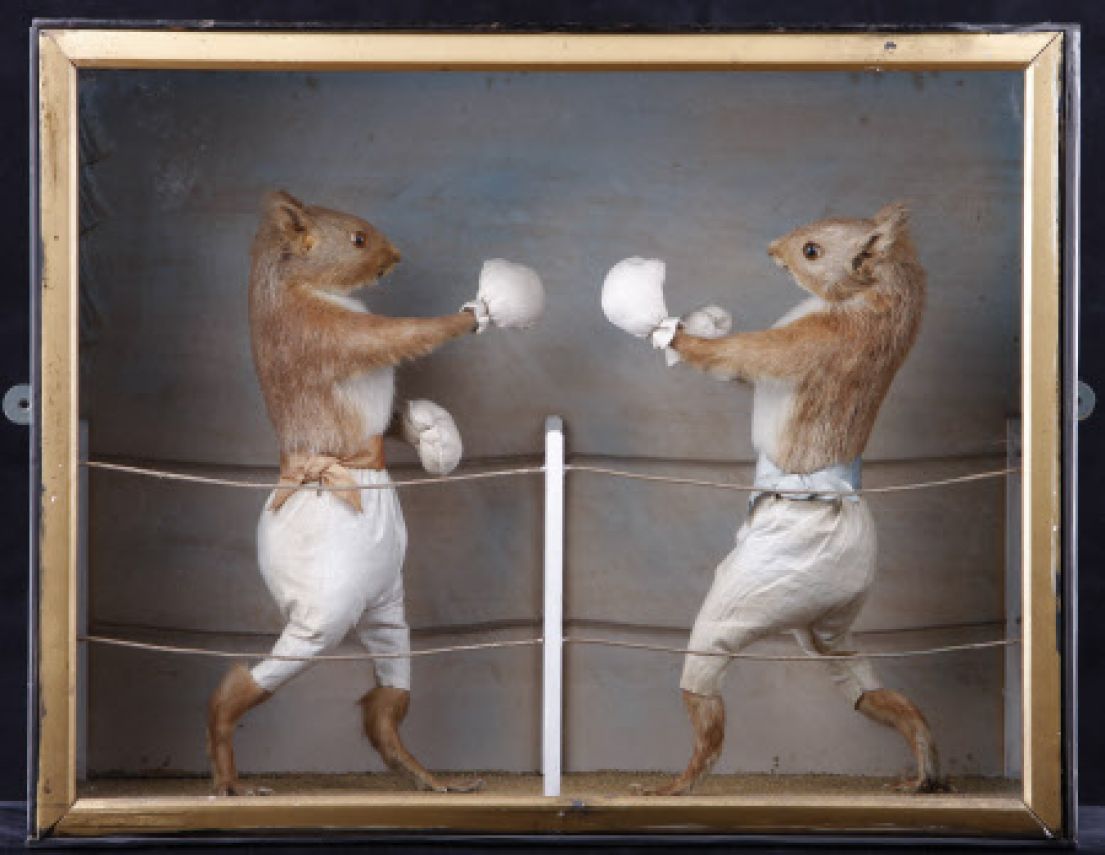 An example of a Victorian craze for taxidermy, Castle Ward has 5 cases depicting a match between squirrels /© National Trust/Peter Muhly

Castle Ward in Northern Ireland is home to this tableau of ‘boxing squirrels’, made by the Victorian taxidermist Edward Hart. The series of five cases take you through a boxing match between two red squirrels. One wears a red sash and the other a blue sash and both wearing boxing gloves (which became mandatory in boxing in 1867 with the publication of the Marquess of Queensberry Rules). The fight plays out until the victorious red-sashed squirrel stands over the fallen blue squirrel.

We might find this distasteful today, particularly because red squirrels are under threat as a species. But Victorians were intrigued by this ‘anthropomorphic taxidermy’ – setting up stuffed animals in poses as if they were miniature humans. Several taxidermy exhibits were displayed in the Great Exhibition of 1851, including frogs having a shave and kittens serving tea (created by German taxidermist Hermann Ploucquet).  Squirrels and frogs were often used, since their shapes and body proportions lend themselves to imitating humans, and they were available in good numbers; red squirrels were shot by local foresters protecting their trees, in the days before grey squirrels became widespread. 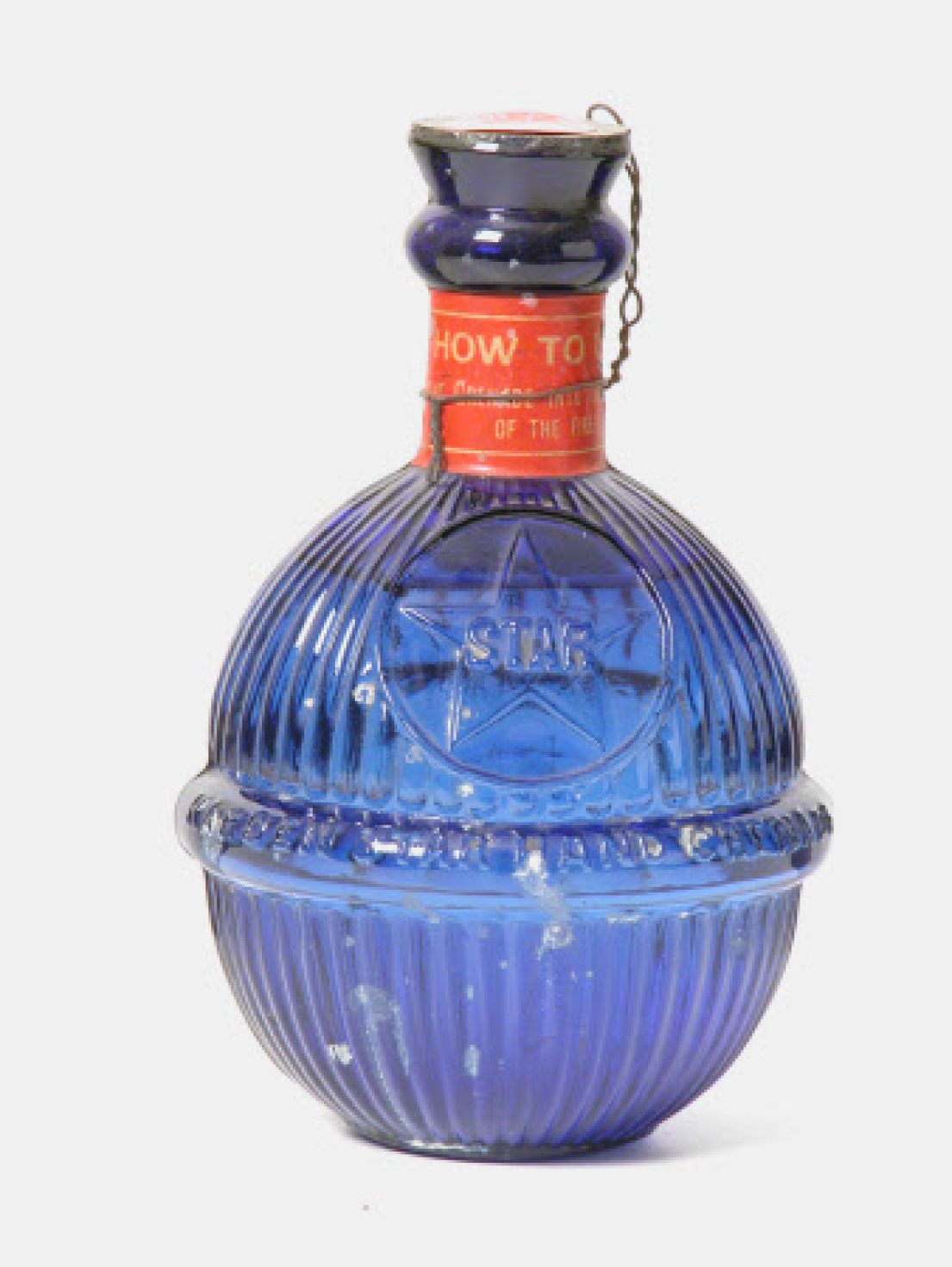 A beautiful bottle from Erddig with a very practical aim, though not a particularly practical effect! / © National Trust/Susanne Gronnow

More than 50 of these glass fire extinguisher bottles or ‘grenades’ were bought by Simon Yorke III (1811-94), who lived at Erddig, near Wrexham. Simon had a particular fear of fire, following a number of minor fires at Erddig. All had been extinguished safely by estate workers, but Simon invested in these grenades as an extra precaution. They were filled with water, salt and ammonium chloride. When the bottles were thrown at the fire, the idea was that the ammonium chloride would heat to boiling point and the fumes it produced would smother the flames.

Actually, the effect would have been equivalent to throwing a cup of water at the flames, but you can still see the ‘grenades’ dotted around the property. Yet the family fear of fire at Erddig continued. In the early twentieth century, pressed steel panels were introduced to the ceiling of the Saloon. This decorative, metal ceiling was intended as ‘protection’ against fire. 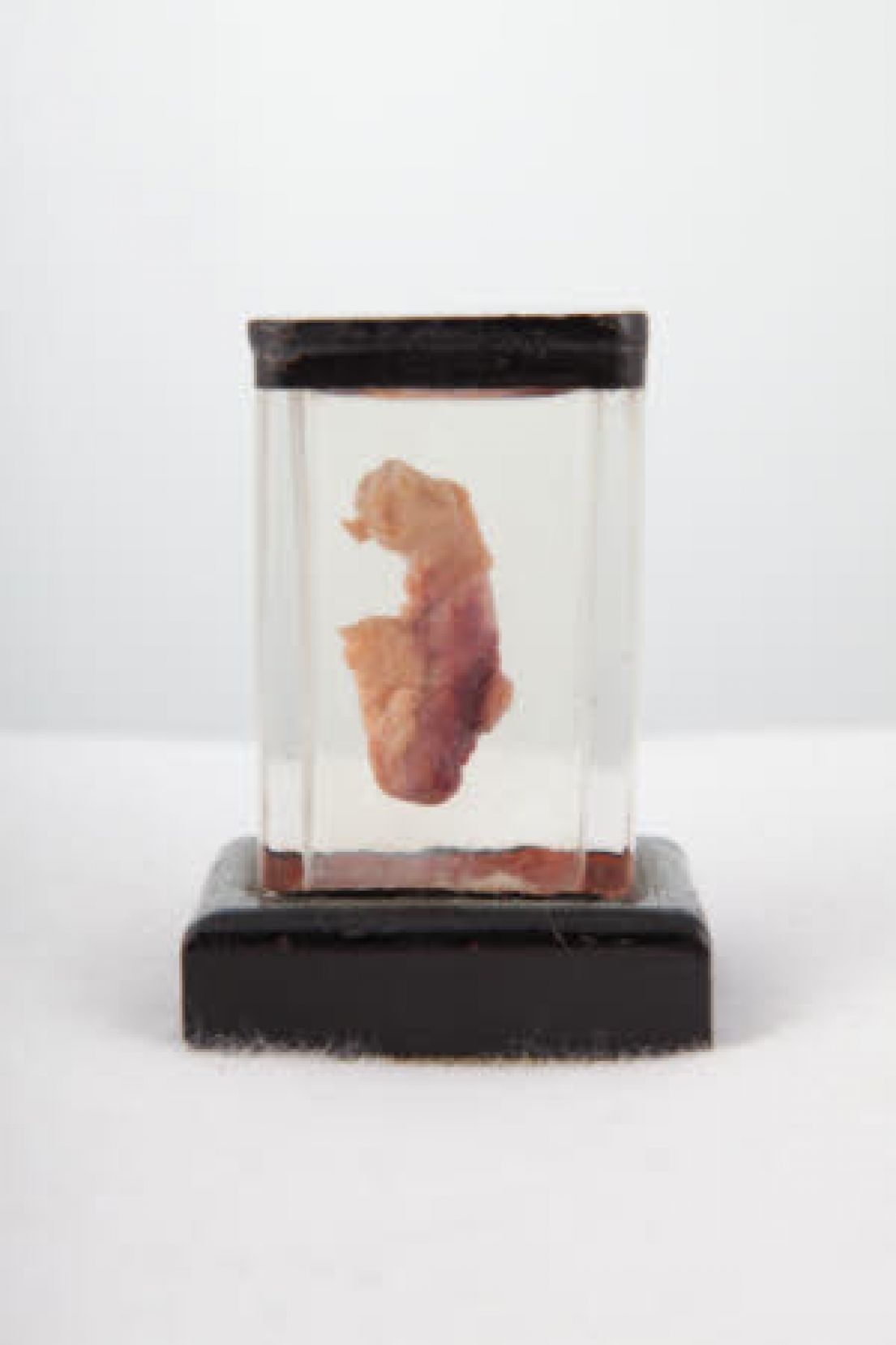 Not for the squeamish, this small glass case at Nuffield Place in Oxfordshire contains one of our more unusual collections items. On a specimen slide, covered in preserving fluid, is the appendix of William Morris, Lord Nuffield, removed by surgery in 1928 and kept on his shelf at home. Morris was the owner of the Morris Motor Company and was at one time Britain’s richest self-made man. He was also a great philanthropist, and this appendix is part of that story.

Fast-forward to 1937 and Morris was looking for an opportunity to use his wealth. Having lived in and grown his business in Oxford, Morris had already donated substantial sums to the University of Oxford to help establish a new college, Nuffield College, with a particular focus on the social sciences. But in 1936-7 he also helped establish Oxford’s Postgraduate Medical School. This became a clinical school for training medical students and his £2 million donation included endowment for three medical chairs. However, Morris argued strongly for a fourth chair in anaesthesia. Oxford were reluctant, but he insisted and got his way. Morris’ insistence may well have been because of his experience in 1928, when he had had a bad and painful reaction to anaesthetics during the removal of his appendix. 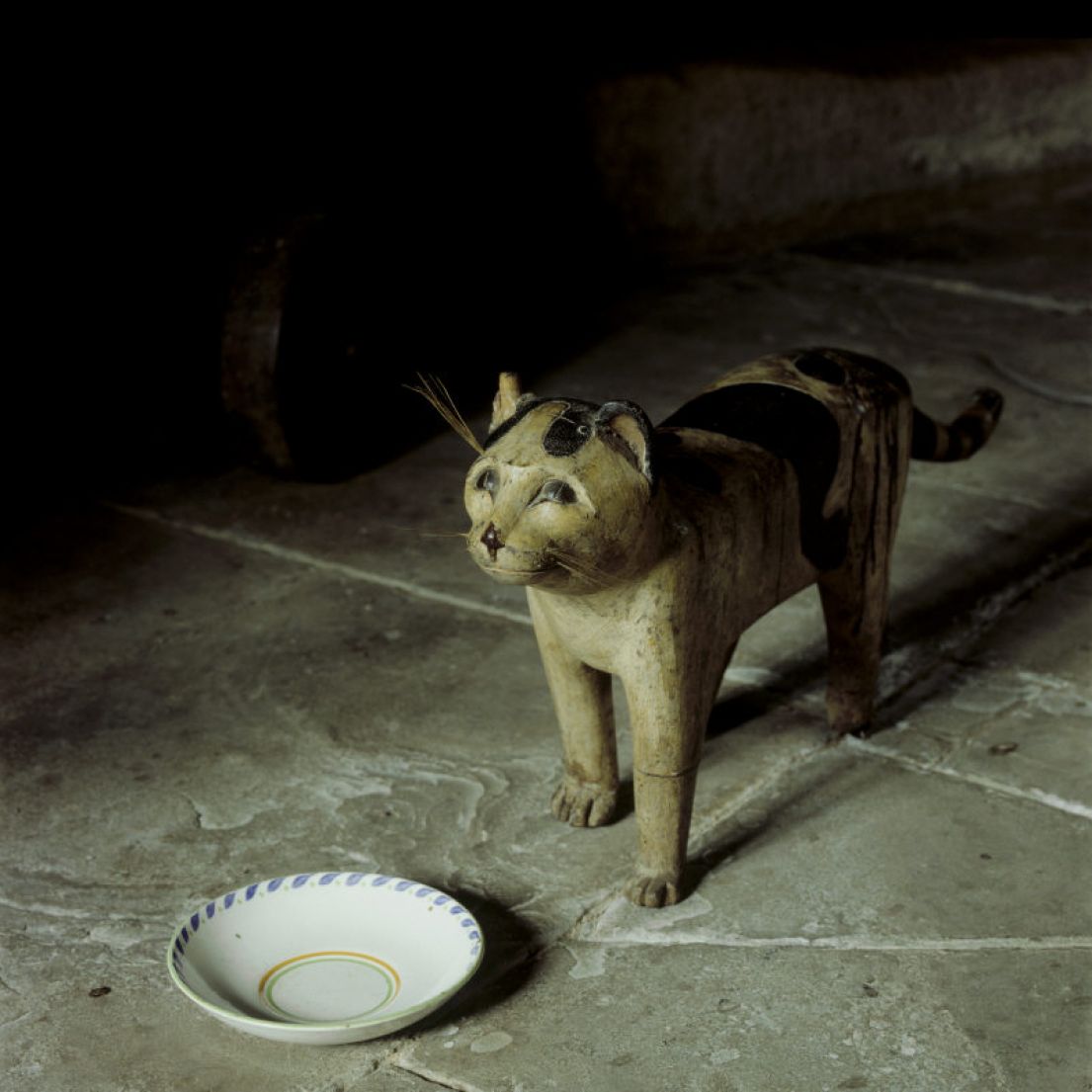 Snowshill in Gloucestershire is a house full to the brim with eclectic, unusual and special objects. This collection was created by Charles Paget Wade between 1900 and1951, when he gifted it to the National Trust. Wade was an architect, artist and craftsman, who inherited his father’s sugar estates in the West Indies. The income from these enabled him to spend his life accumulating a large and varied collection, much of which you can see at Snowshill today. This included everything from bicycles, toys and masks to musical instruments and samurai armour. In 1945 he wrote that he hoped the collection, which featured rare treasures as well as everyday objects, would “be a valuable record in days to come.”

The house at Snowshill was soon full of Wade’s collection and he spent many hours there arranging and labelling objects. In the meantime, he lived out of the old cottage in the courtyard, where you can now find this wooden cat. The cat was a gift from Wade’s friend, Professor Albert Richardson. Richardson apparently felt that Wade needed company at Snowshill but didn’t think his friend was responsible enough to look after a real pet. So, he presented Wade with a life-sized wooden cat. White with black spots, the cat also had whiskers and eyelashes and stood on a rug next to his fire, an empty food bowl in front of him. Despite of his friend’s doubts, Wade did in fact look after his wooden pet, replacing its whiskers every year.

*To find more on the objects mentioned here search for their catalogue numbers: