Introducing… MOLA and the lost stories of Londoners

Can you help us tell forgotten stories?

That’s the question the team at MOLA, a brilliant archaeology company, came to us with, and are asking you. It doesn’t matter where you live, you really can help uncover hidden histories - no digging required! Actually, if you’ve ever wondered what happens after all the digging, or why it matters, then this project is just the ticket. It’s all about joining the dots between different pieces of information to build up a richer picture of the past.

Katrina and Katherine from MOLA are here to tell you more about Stories of St James’s Burial Ground, a project being run on behalf of Mace Dragados as part of the wider HS2 Scheme. They’ve already pieced together some of the amazing stories, but there are plenty more to uncover – all from the comfort of your armchair. 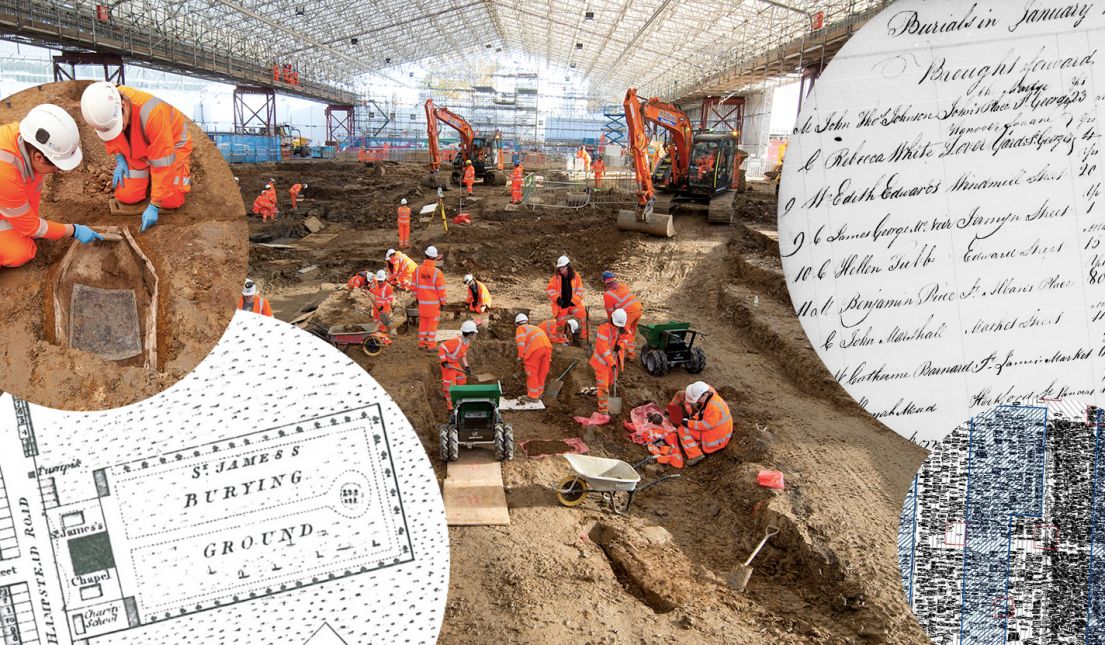 Here at MOLA we’re always looking for ways to get everyone involved in archaeology, and our work on an unusually well documented burial ground near Euston station, London gave us a chance to do just that.

Over two years, our archaeologists carefully excavated more than 31,000 burials from the old Burial Ground for St James’ Church Piccadilly. But this was only the start of an incredible opportunity to learn about late Georgian and early Victorian London (1790-1853).

You might ask, why are we getting so excited over this particular burial ground? Well, there are a couple of reasons.

First, we have a rare chance to match up archaeological knowledge with archival knowledge:

Secondly, this burial ground was used during a crucial time in London’s history:

Between 1790 and 1853 London was rapidly expanding and changing and all sorts of Londoners – rich and poor, young and old – were buried here. We can glean so much information about the lives of these people, especially poorer people who aren’t found in many historical records. 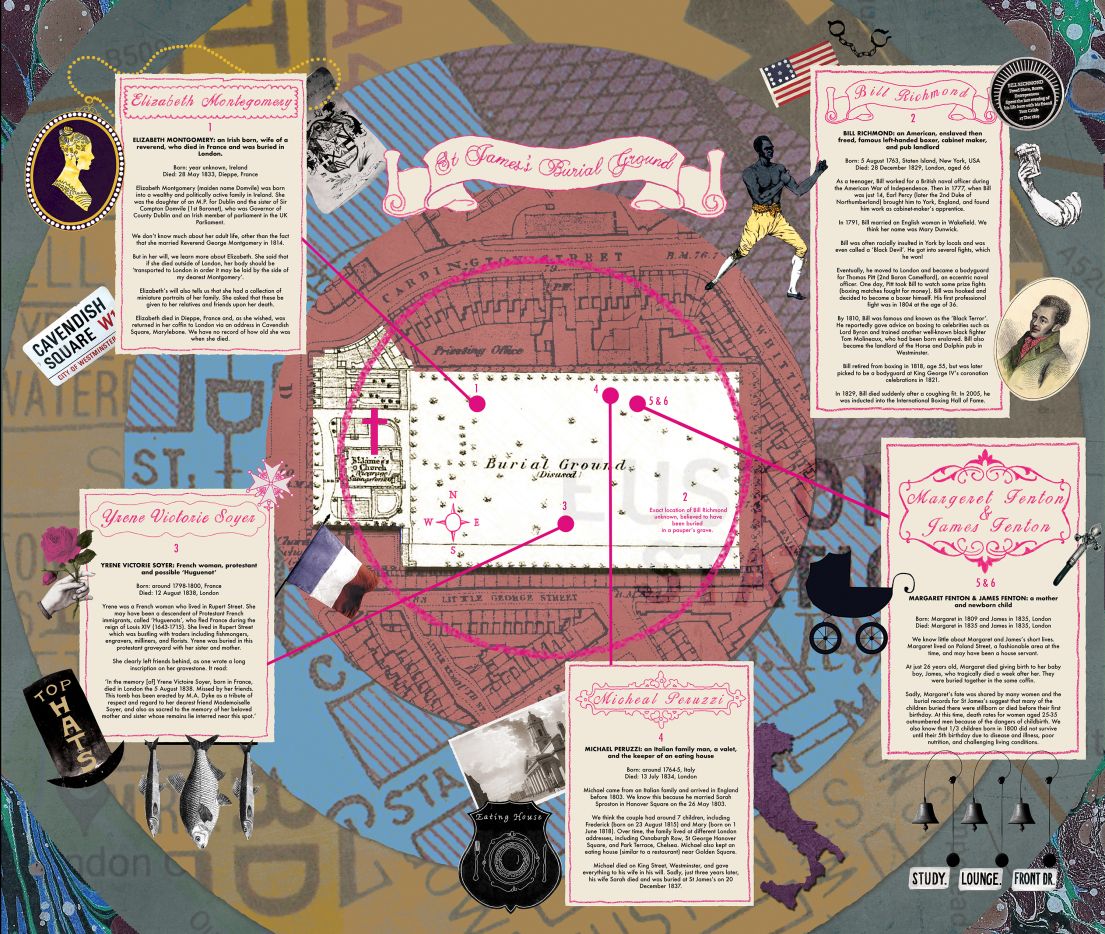 So far, we’ve worked through 20% of the records, and we’ve already found some fascinating stories.

Yrene Victorie Soyer - Yrene was a French woman who lived in Rupert Street. She may have been a descendent of Protestant French immigrants, called ‘Huguenots’, who fled France during the reign of Louis XIV (1643-1715). She lived in Rupert Street which was bustling with traders including fishmongers, engravers, milliners, and florists. Yrene was buried in this protestant graveyard with her sister and mother.  She clearly left friends behind, as one wrote a long inscription on her gravestone. It read:

‘In the memory [of] Yrene Victoire Soyer, born in France, died in London the 5 August 1838. Missed by her friends. This tomb has been erected by M.A. Dyke as a tribute of respect and regard to her dearest friend Mademoiselle Soyer, and also as sacred to the memory of her beloved mother and sister whose remains lie interred near this spot.’

Margaret and James Fenton - We know little about Margaret and James’s short lives. Margaret lived on Poland Street, a fashionable area at the time, and may have been a house servant.  In 1835 at just 26 years old, Margaret died giving birth to her baby boy, James, who tragically died a week after her. They were buried together in the same coffin.

Sadly, Margaret’s fate was shared by many women and the burial records for St James’s suggest that many of the children buried there were stillborn or died before their first birthday. At this time, death rates for women aged 25-35 outnumbered male deaths because of the dangers of childbirth. We also know that one third of children born alive in 1800 did not survive until their 5th birthday due to disease and illness, poor nutrition, challenging living conditions, and accidents. 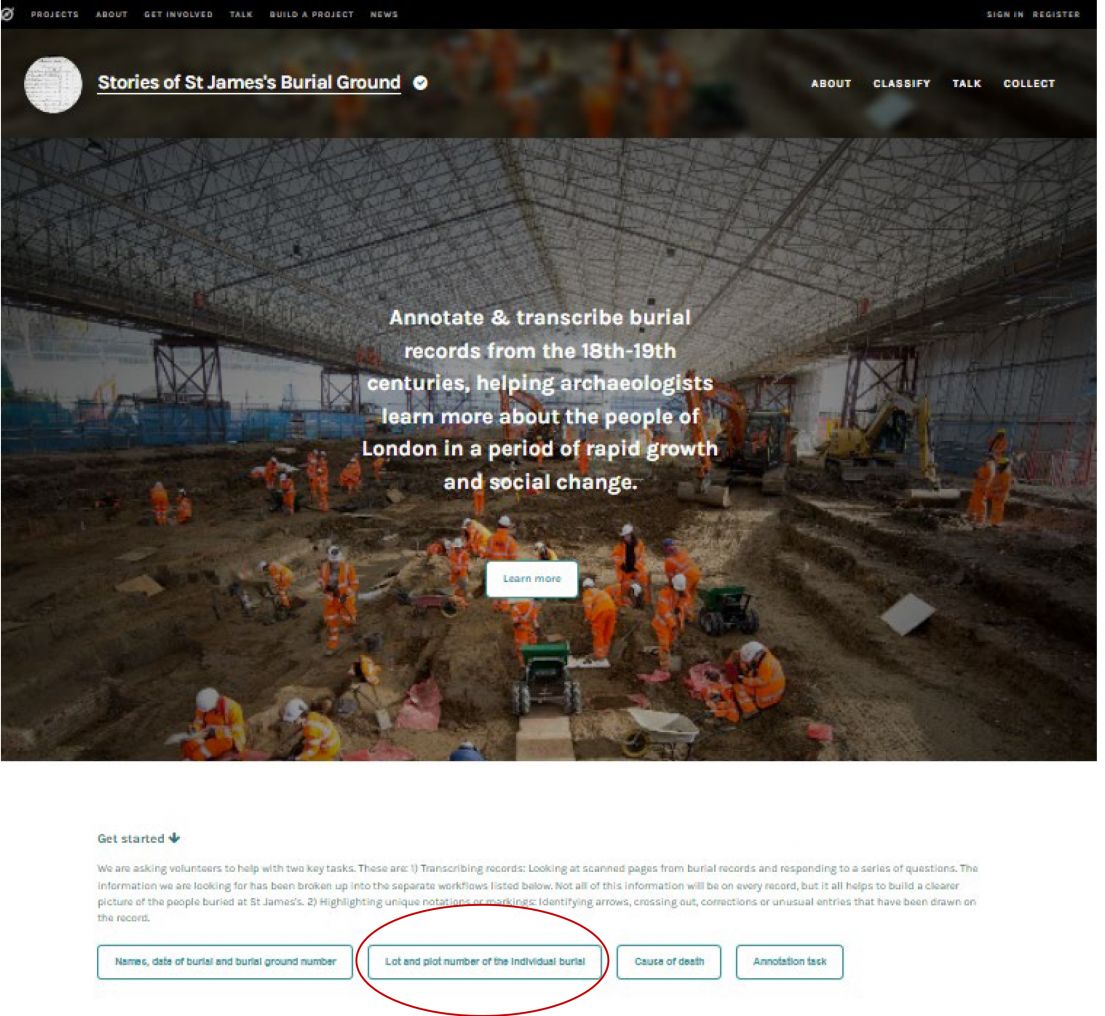 Welcome to the Zooniverse, where you can help the team piece together hidden histories. TIP - the lot and plot numbers ringed are key!

How you can help

To uncover more stories we need help matching up the puzzle pieces of burials to records. So we’ve put the pieces online, where anyone can get involved, wherever you are! Here we’re asking you to help us change the images of handwritten records into typed up lists that we can easily search for names and locations.

Wherever you are, whether you have 20 minutes or 20 evenings spare, you can help uncover hidden history - every little helps!

About Katrina Foxton and Katherine Newton

Katrina is an Engagement Project Officer who is passionate about engaging communities with the past, and is leading MOLA’s work getting the burial records online. Katherine is a Communications Officer and loves nothing more than talking (and writing) about MOLA’s archaeological discoveries.