In a year celebrating People Power, as the season of peace and goodwill (as well as feasting and festivity) approaches there was only one place to turn for our next curious collections post... Did you know that there's a museum dedicated to charting the stories of peacemakers and social reform? To tell us about it here's Jack Lynch, from The Peace Museum to introduce their collection and the stories behind some of his favourite banners. 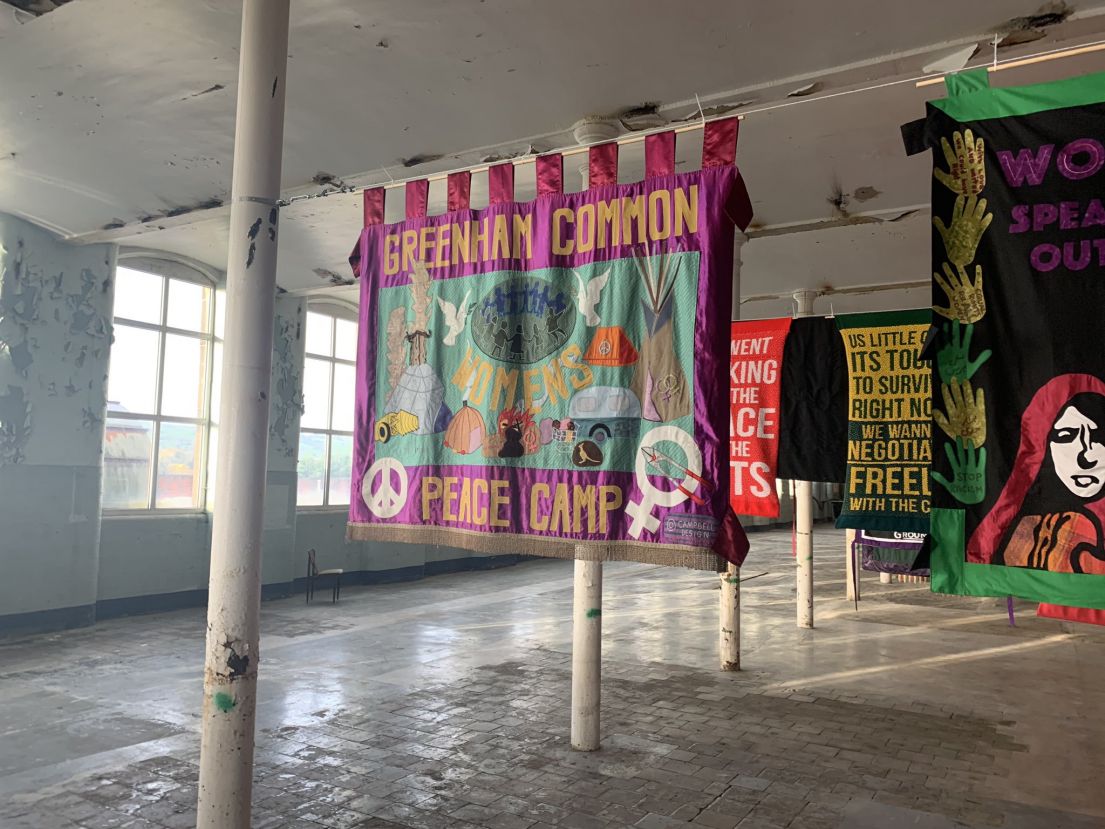 The Peace Museum is rooted in a collection of over 7,000 objects; a diverse mix of banners, historic campaign materials like posters and badges, personal items, artwork and photography. Over 200 items in the collection are textile protest banners, which help to chart the history of peacemakers locally, nationally and internationally. 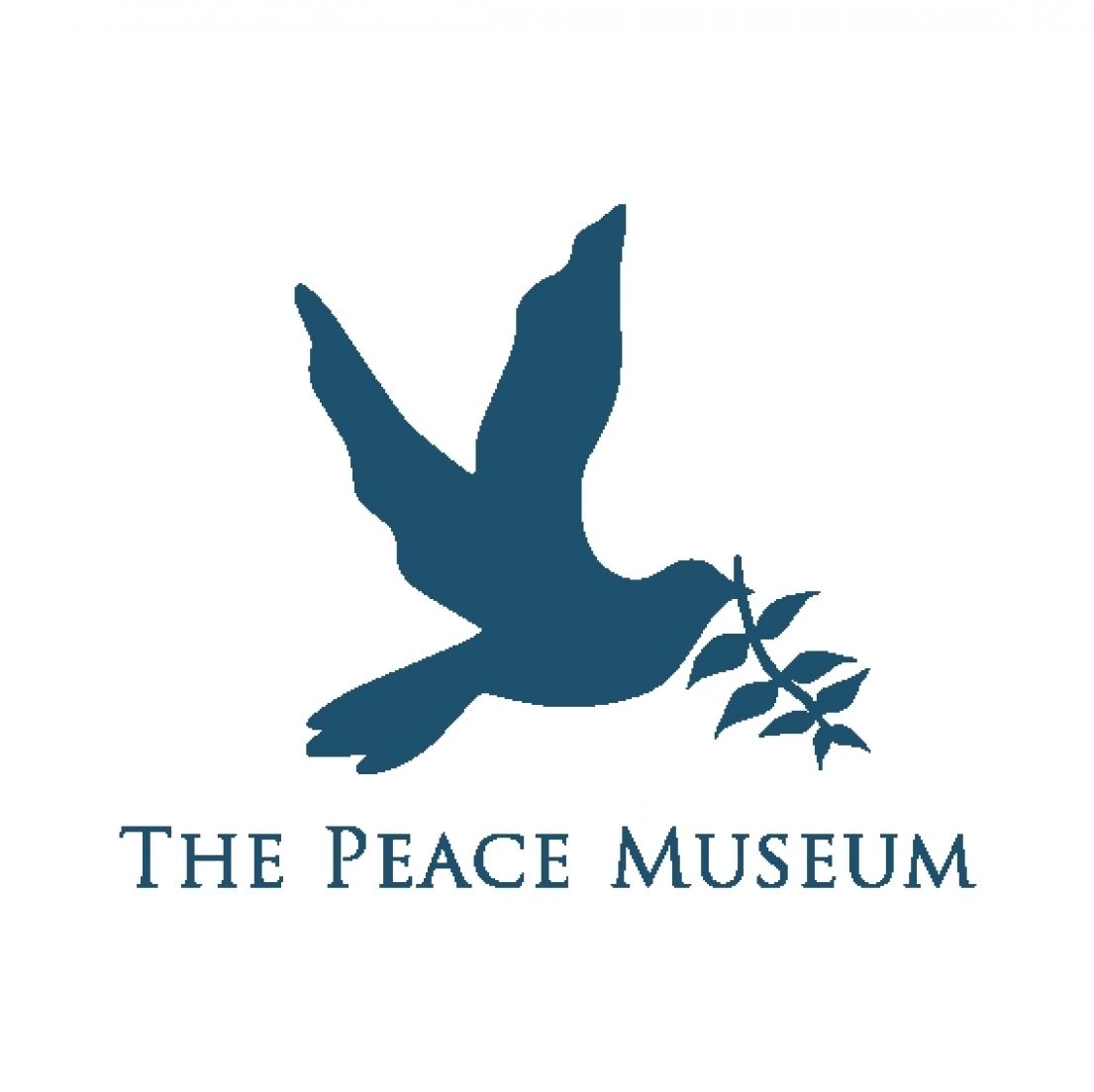 Recent years have seen the mainstreaming of protest with high profile events such as Women’s March, Anti-Trump protests and Extinction Rebellion, who have harnessed social media to transcend political circles and become pop-culture moments. Protest has been at the front of the public consciousness with clever and humorous placards and banners continuing to go viral online, changing the way the public thinks about protest. With a collection of objects as rich as The Peace Museum, it is fascinating to see the legacy of the peace movement on protest today.

In the museum and heritage space, this is mirrored with an increased interest in counter-cultural history and more focus on ‘disobedient objects’ in museum collections. Earlier this year we were thrilled to be a part of Banner Culture – a mass display of over 200 banners in a disused mill as part of British Textile Biennial, for which 28 of our banners were on display. 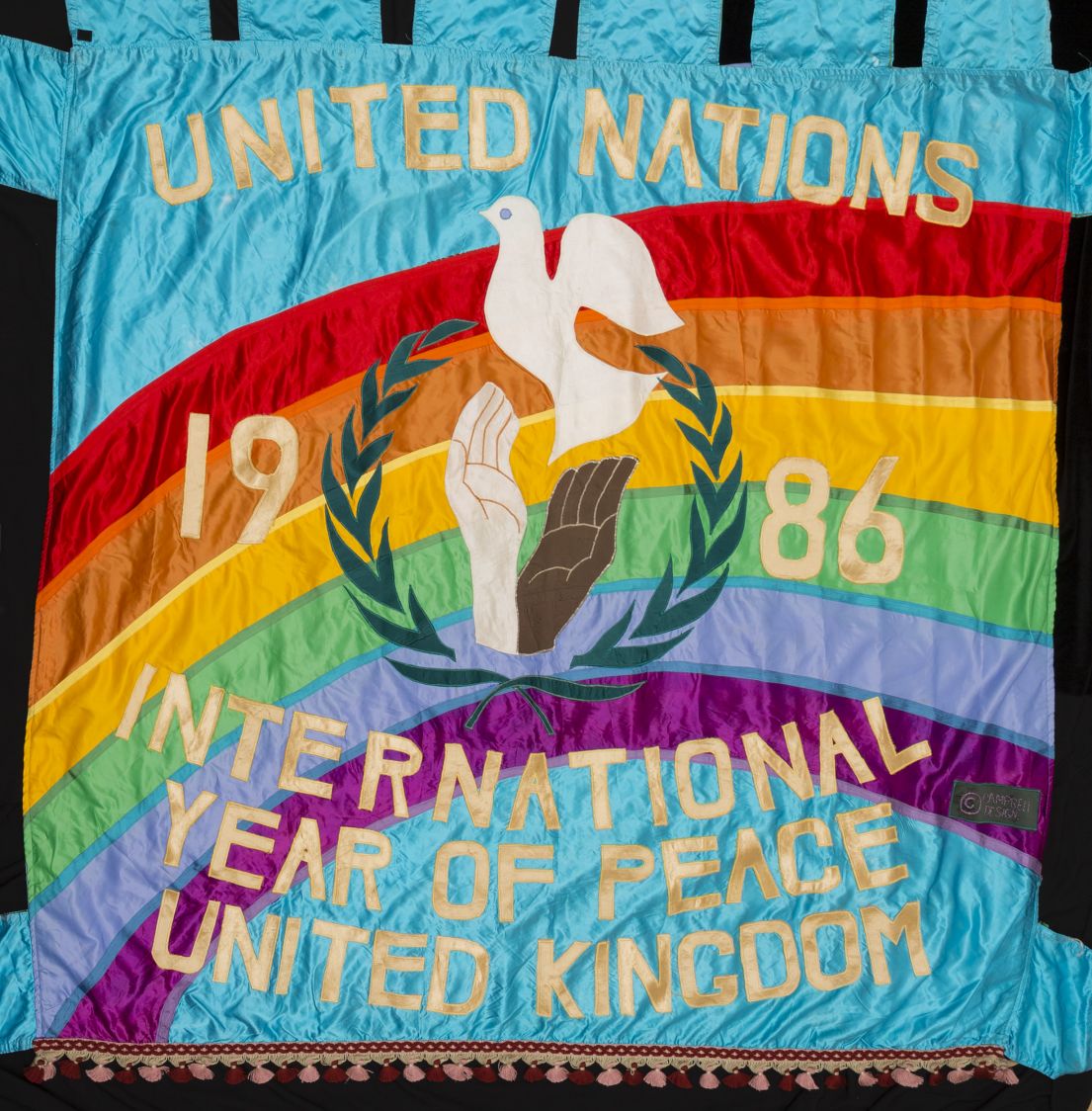 One of Thalia's beautiful banners: current exhibition 'Peace OUT' explores the rainbow as a symbol for peace as well as LGBTQ+ rights / ©TPM

Many of the banners in our collection were made by noted banner artist and Greenham Woman, Thalia Campbell. As a founder of Greenham Common Women's Peace Camp, Thalia’s powerful collection of banners are testament to the impact of women on the peace movement. A female led peace camp, women flipped traditional notions of femininity whilst leveraging their status as mothers and carers towards their cause for making the world more peaceful for future generations.

One of the most iconic moments in Britain’s counter-culture and one of the most enduring examples of feminist protest in recent history, the legacy of collective action and resistance is still felt today.

Another interesting part of the banner collection comes from Kenneth Hockney (1904 - 1978), father of Bradford icon David Hockney. An avid peace campaigner, Kenneth created posters and banners used in the early CND (Campaign for Nuclear Disarmament) marches of the 50s and 60s.

David Hockney would later follow in his father’s footsteps as a conscientious objector. Kenneth Hockney’s activism has been credited for David’s defiance of heteronormative structures and his openness in portraying queer life in his work:

“Proclaiming his homosexuality in 1962, long before the word ‘gay’ was used in that context, David isn’t afraid to stand up for what he thinks is right, as our father did before him.” The Hockneys: Never Worry What The Neighbours Think, by John Hockney (2019). 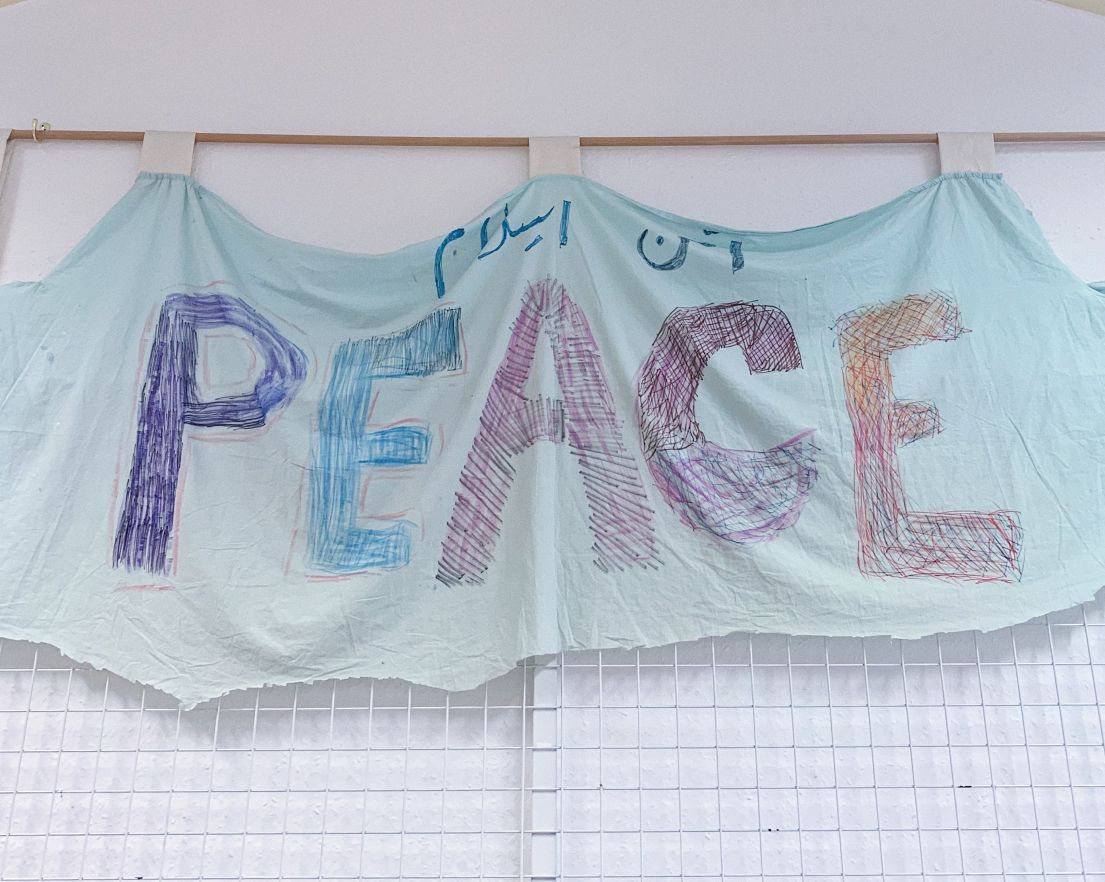 A simple but powerful message from Bradford, 1995 / © The Peace Museum

Our collection contains so many beautiful banners made by artists and banner makers, however sometimes it is those made in the spur of the moment which are the most powerful.

Bradford has a rich history of peaceful activism, but the unity of the city has also been tested in the past. Riots in Bradford in 1995 and most notably 2001 brought the issue of race relations in the city to the country's attention.

In response to riots in Manningham in 1995, a multiracial, multifaith group of women came together to share concern about the violence. They quickly made a banner from an old bed sheet with the word ‘peace’ written in English and Urdu and took to the streets. Ignoring jibes of ‘get back to the kitchen’ the women walked slowly through the area and the crowd of young men began to disperse.

Since 2001, Bradford has collectively and peacefully faced many other tests of its unity, with much less publicity. This banner is one of the many objects in our collection which indicates the possibilities of everyday people working together for justice in their communities.

We’re part of the International Network of Museums for Peace and there are a range of different peace museums and archives all over the world. Although not specifically peace focussed, some war museums also have great collection items which relate to peace.

Some of my personal favourite places for social history are People’s History Museum in Manchester and the Working Class Movement Library in Salford and I love the Twitter account @wrkclasshistory about working class history.

Jack is the Marketing and Press Assistant at The Peace Museum. A co-founder of Bread + Roses, a cooperatively run café and event space, he specialises in the arts, culture and community wealth building. He is interested in counter-culture, graphic design, queer history and trainers.