Let’s Bake! A rummage through the National Trust’s collections

Check the cupboards and choose your weapon - will you go for a hollow glass rolling pin, a prickly baker's docker or this trim little creature?! Yes, we're talking 'batterie de cuisine' ('kitchen artillery' apparently!) As the National Trust prepares to release a new book on baking, I needed no further excuse to invite back Katie Knowles, Assistant Curator, for another rummage through their extraordinary collections. This time she serves us stories of tins, trays, and trimmers with side helpings of food history! So put the kettle on, grab the cookie jar and let's explore! 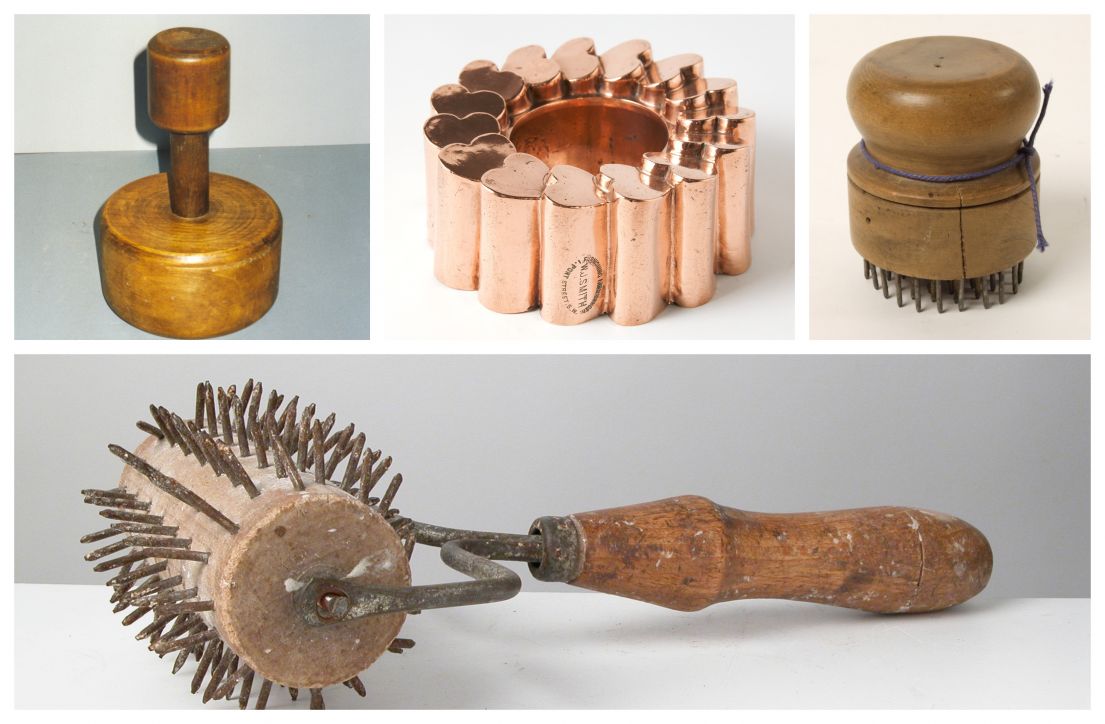 If you are like me, you probably have a selection of baking gadgets dotted around your kitchen to help you whip up tasty treats,  from cookie cutters of all shapes and sizes to baking trays, mixers and cake tins. The National Trust collections also contain a huge variety of baking paraphernalia from the batterie de cuisine (literally kitchen artillery, or the contents of a kitchen) of country houses and homes across England, Wales and Northern Ireland. Here is a small selection of historic gadgets – from the familiar to the curious.

We have the Ancient Egyptians, Greeks and Romans to thank for the pies and pastries we know today. By the 14th century the words pastry and ‘pie’ (meat or fish enclosed in pastry) were in use in Britain. The pastry crust was often inedible, acting as a container for the savoury filling. This would be shaped by hand or ‘hand-raised’ and was referred to as a pastry ‘coffin’. By the 19th century, solid wooden cylinders called pie-moulds, blocks or rammers  - like the double-ended one above from Petworth in West Sussex - were available to help cooks shape the base and the walls of the pie crust more easily, ready to be filled. Larger country houses might also have a ‘pastry’ – a dedicated room away from the fierce heat of the ovens, where pastry could be worked in cooler conditions. 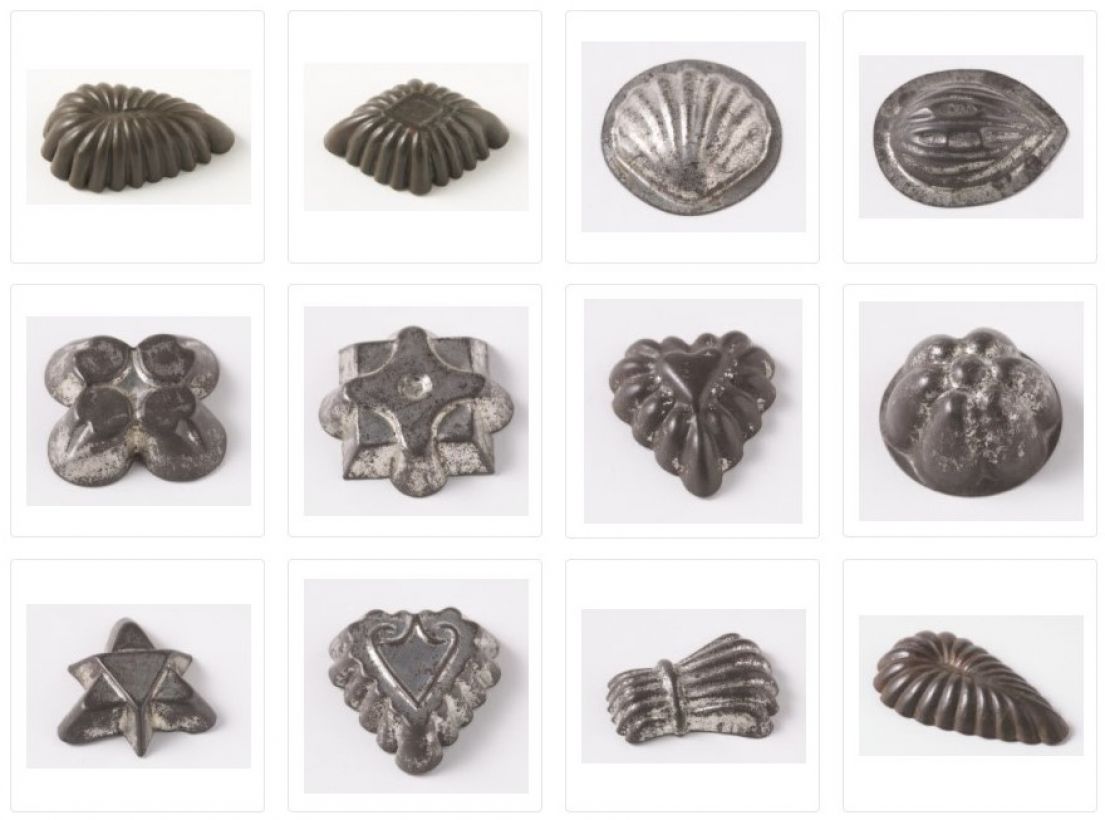 From walnuts to wheatsheaves, tartlet tins and moulds come in all shapes and sizes like these from Penrhyn Castle, Wales / © National Trust

Over the centuries, pies became the centrepiece of feasts and an increasing number of sweet pastries were introduced. Copper and brass bakeware gave way to tinplate pastry cutters and moulds of all shapes and sizes, as cooks competed to present beautiful – and tasty – food. An 1869 inventory from Petworth House, showed over 264 individual patty pans and tins (compared to just 20 in 1764) and over 200 ornamental moulds for puddings and pies!

With presentation of dishes becoming ever more important, you could trim the edge of a pie or pastry with a pastry jigger (or jagger) to get neat or decorative edges. These baking tools were being manufactured by brass founders as early as the 16th century but could also be carved from wood or bone, like the dog ‘jigger’ above from Buckland Abbey in Devon. The jagged or scalloped wheel produced a pattern on the pastry or could be used to cut out shapes.

If you're going to give a gadget as a gift, make it a beautiful one, like this rolling pin from Clevedon Court / © National Trust

The Nailsea glass factory near Bristol produced a range of striking, colourful glass rolling pins, like this one from Clevedon Court, Somerset. The hollow rolling pins were sometimes filled with ice or cold water, to keep pastry cool and firm when it was being rolled out. As well as being used in baking, they were sometimes filled with salt and given as gifts by sailors to their sweethearts. 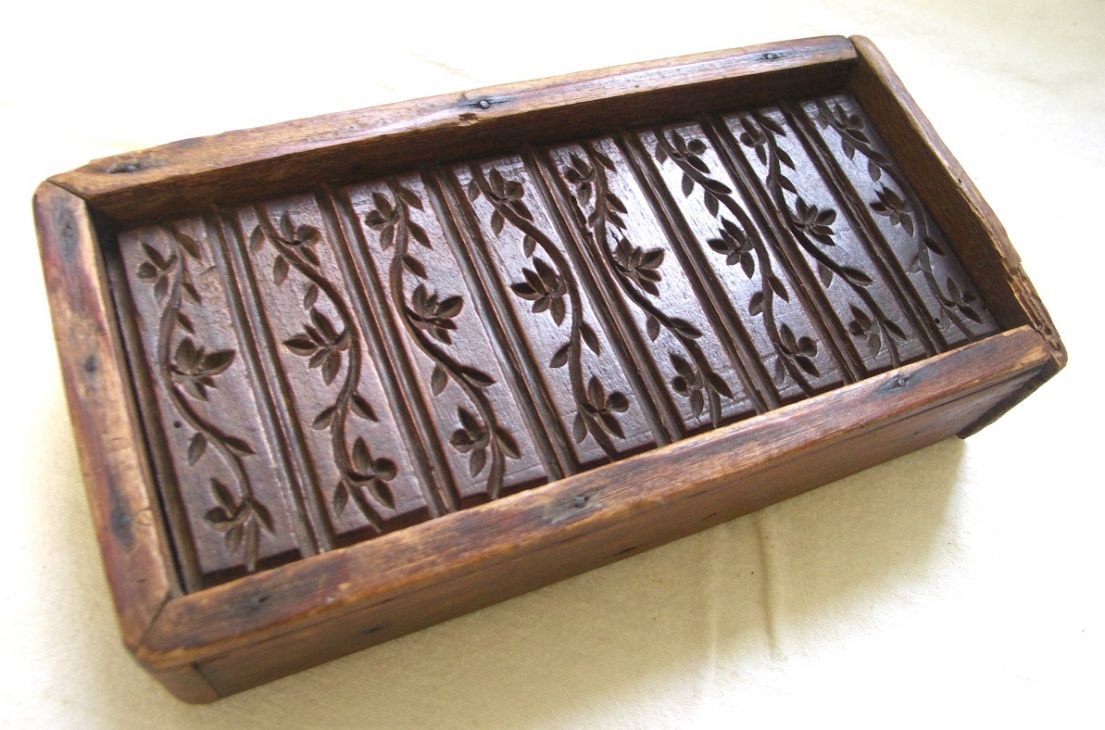 Baking moulds were not confined to pastry and puddings. From the 13th century, gingerbread was a popular bake and traditionally sold at fairs. Medieval recipes for gingerbread direct the baker to finely grate stale bread and mix it to a paste with ginger, honey and other spices such as pepper, saffron and cinnamon. This mixture could then be shaped using wooden moulds and baked. Pieces of gingerbread topped with gold leaf were often called ‘fairings’.

The long intimidating prickly gadget in the earlier kitchen artillery image is a baker's docker from Erddig in North Wales. The wooden cylinder embedded with sharp spikes would be rolled across the dough or pastry, perforating it with holes and preventing trapped air from buckling or rising too much. Similar gadgets were available for biscuits, like the one featured in the same image, from Uppark House, West Sussex. The word biscuit derives from the Latin for ‘twice cooked’, as early biscuits were re-baked to ensure they were crisp. 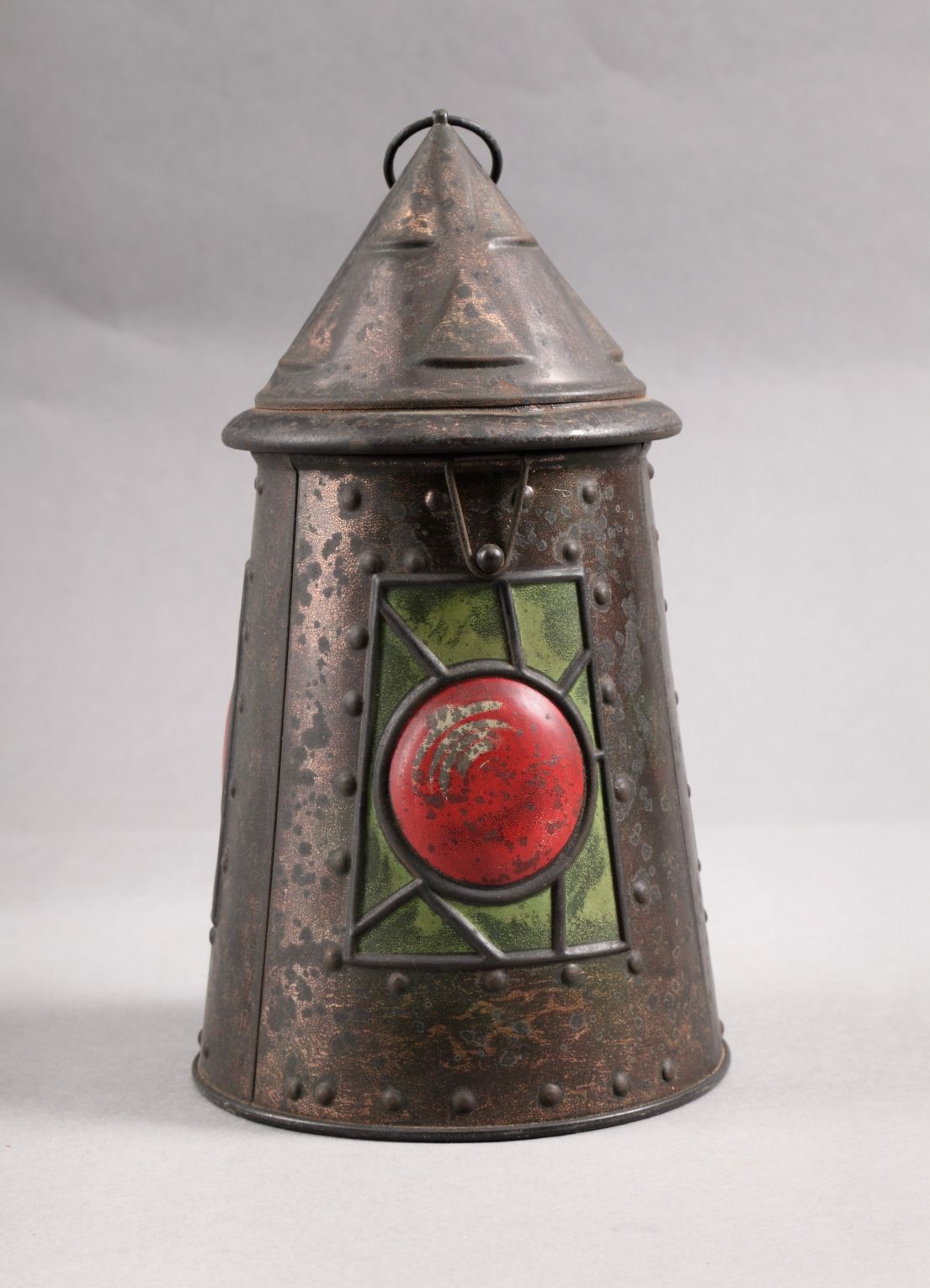 In the unlikely event you have any leftover treats, you might want to keep them fresh in an airtight storage container. Tinplate biscuit tins were manufactured in the Victorian era, allowing biscuits to be stored and transported to customers across the country. By 1900 the famous biscuit firm Huntley & Palmers (which started life as a small bakery in Reading in 1822) was the largest biscuit manufacturer in the world, producing over 400 different varieties of biscuit. They perfected the art of the eye-catching biscuit tin and experimented with new and imaginative designs, including this workman’s lantern or railway warning light from 1911-15. Their tins (which are often collectors’ items) could be re-used, displayed as ornaments or even converted into children’s toys.