‘put her forward’: Making a statue for the 21st century

'So…we’re going to print some statues.’ Definitely sounds like something that would have been said on Star Trek or that would have made Marty McFly do a double take. It’s all quite futuristic sounding but it’s actually a reality. And, we’re proud to say, put her forward is pushing the boundaries of this technology and using it in new and exciting ways. Here’s Cat from non zero one to tell you more.

Tapping into the zeitgeist

When we were dreaming up put her forward from our studio, the thing we were most interested to find out was who the public would nominate and why. We realised that the nominations would provide a kind of zeitgeist for what society thinks is important today - that if we had done the call out 5 years ago or in 5 years time the nominations we would receive could be very different.

Thinking about this zeitgeist, we also wanted to use a statue technique that complimented that "of the moment" feeling, which is why we didn't go for bronze or stone, but 3D printing.

3D printing is just on the cusp of mainstream. Printers have popped up in libraries and universities and there's a handful of studios across the country offering small 15cm models of yourself as wedding cake toppers, graduation gifts and so on. Of course for put her forward we wanted to do something slightly different...

Working with the amazing Tim Milward at Backface, who is probably the best 3D technician around, we created a plan for how large we could make the statues of women without the quality being compromised, and that's how we reached 35cm. This is the width of the sandstone-esque material that the 3D printers cut from, so anything more than this we would have to do in pieces and glue together - which we felt wasn't going to look good enough for our women.

What's interesting is that no matter the height of the women, they are all scaled up to as close to 35cm as we can get. So if we put the statue of Iby, who is scanned sat down, next to the picture of Cleo, who is stood wearing a big hat, they will be completely out of perspective to each other. But we didn't mind this as each statue is being unveiled in a place that is important to each woman, so out of the studio they might never be next to each other. 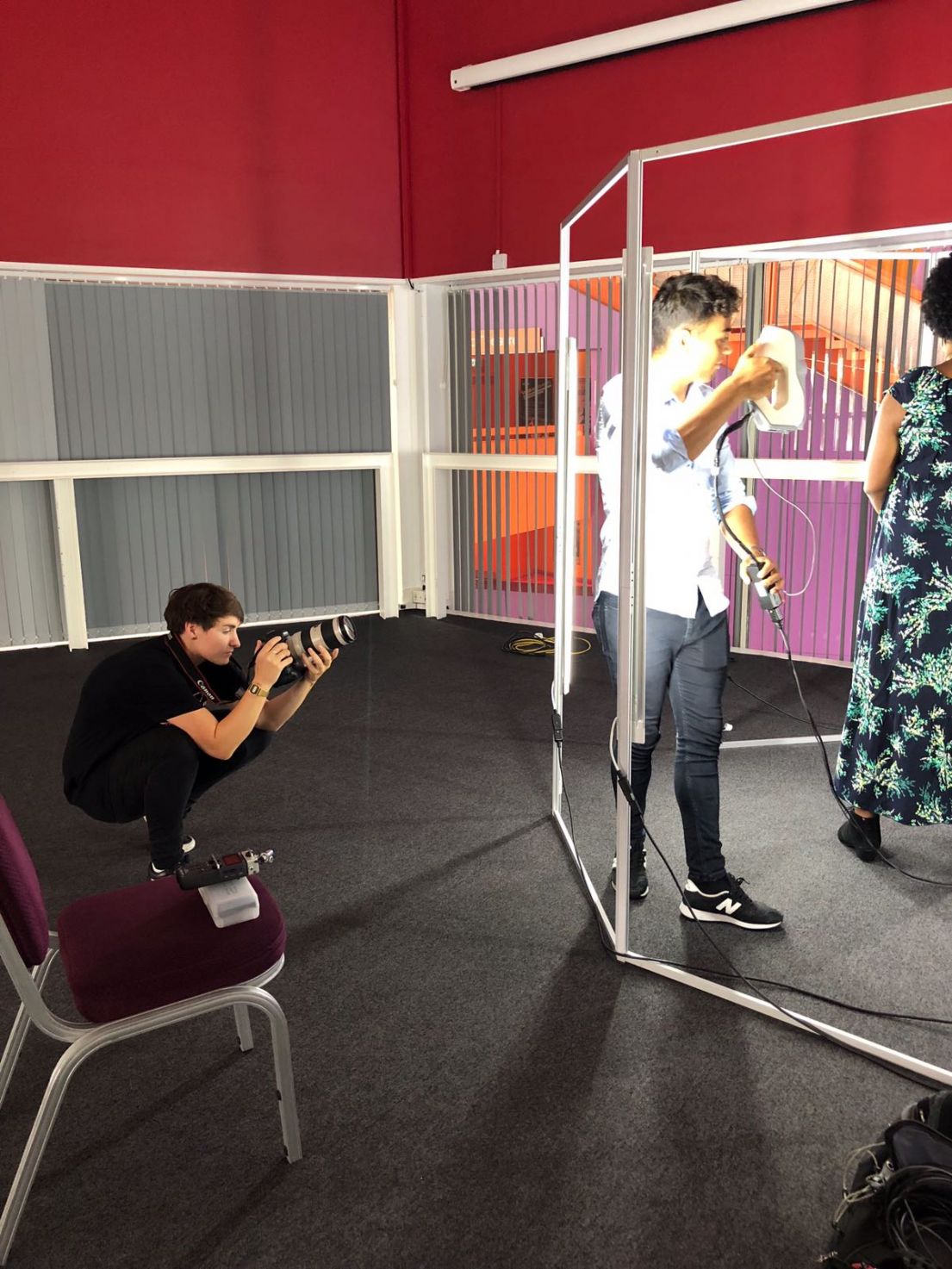 The printing process runs something like this... first we scan the women, using a machine that looks like a kind of flashing iron. Then a black and white digital model is formed from the scan, which looks a bit like a plaster mould. On this render the 3D artists work up the digital model, refining the colours and trying to get in as much of the detail as possible - from the feathers on a hat to the shape of a pair of glasses to the book they are holding. We check this colour render with each woman before the statue goes to print.

The figures are created by printing CMYK colours and clear binders into layers of a kind of gypsum powder (a bit like sandstone). Each layer is 100 microns thick, about the same as a human hair!

Eventually after all the layers are printed it's built up into a big block of powder with the model inside.  Anything that's been printed on is relatively solid, while the rest is still loose powder.  The unused powder is hoovered out revealing the figure inside. The figure then moves over to the finishing station where an air brush is used to gently blow away any more powder.

Next the statue goes for a dip! V-e-r-y  g-e-n-t-l-y it's dipped in a bath of superglue which brings out the colour and once set, makes the figure more robust. It takes around 24 hours to dry and then it's dipped again.

Finally there's any last touch ups by hand and one last protective lacquer.

And then our statues are ready for unveiling!