Did you know that Tunbridge Wells was once considered a 'frontier town'? That it was the first to create a town wide phone system? That the museum mascot is a mystery dog named Minnie from China?! Well, the tale of the town and more can be explored through the curious collections of Tunbridge Wells Museum. Currently under wraps for a major metamorphosis into a new centre, Ian Beavis, Research Curator, gives us a taste of their collection and how you can see some of it this summer. 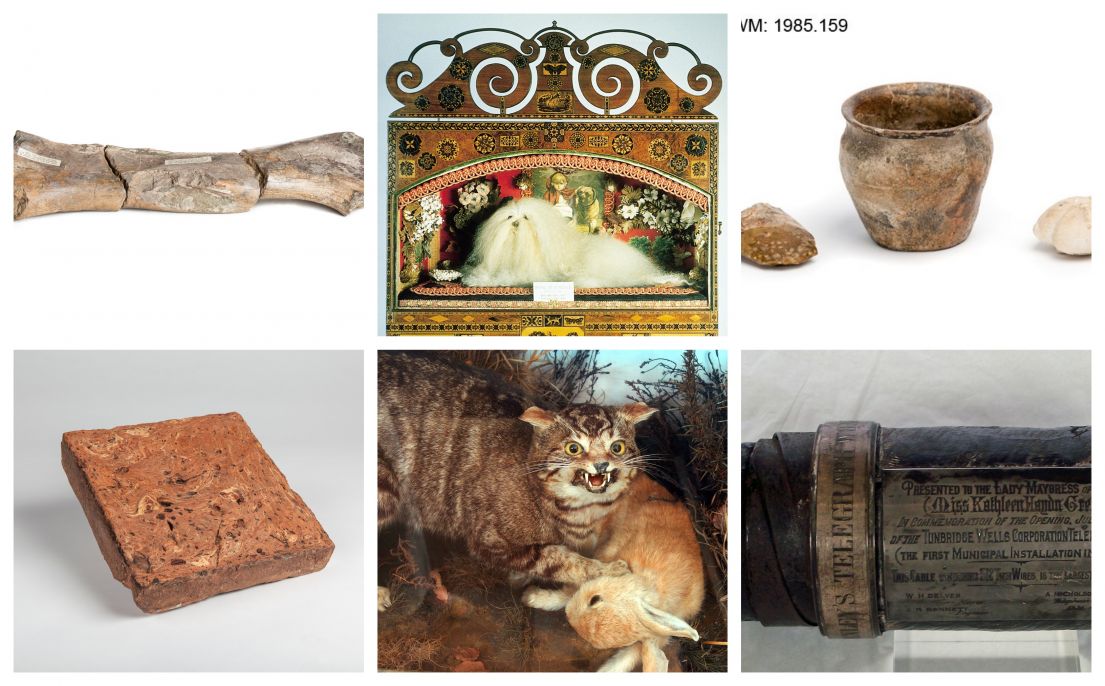 ‘Tunbridge Wells is Tunbridge Wells, and there is nothing really like it upon our planet’, wrote H G Wells in 1933.  Best known for its iron-bearing spring and the Pantiles, Britain’s first pedestrian precinct – not to mention the legendary ‘Disgusted’ – Tunbridge Wells has a unique history as a town that was created from scratch to cater to the needs of the country’s earliest tourists.  The Tunbridge Wells Museum collection reflects this story, as well as the interests of the Victorian Natural History and Philosophical Society that founded it.  It also reflects the enthusiasms of the three earliest curators, who together spanned 80 years and added costume, toys, and the local craft of Tunbridge ware to the mix.

The Museum’s display galleries closed in November 2018 in preparation for a two year Heritage Lottery funded project to create a new integrated service including library and adult learning in a refurbished and expanded building.  This will be named after the local social reformer and women’s suffrage campaigner Amelia Scott.  Meanwhile, our outreach service will continue to share collections and knowledge around the town and adjacent High Weald area, and the Activity Plan which accompanies the physical building programme includes a varied range of exciting community projects.  A selection of our most popular and iconic objects will feature in the temporary library which is shortly to open in the Royal Victoria Place shopping centre, and I have picked out a few with especially fascinating stories. 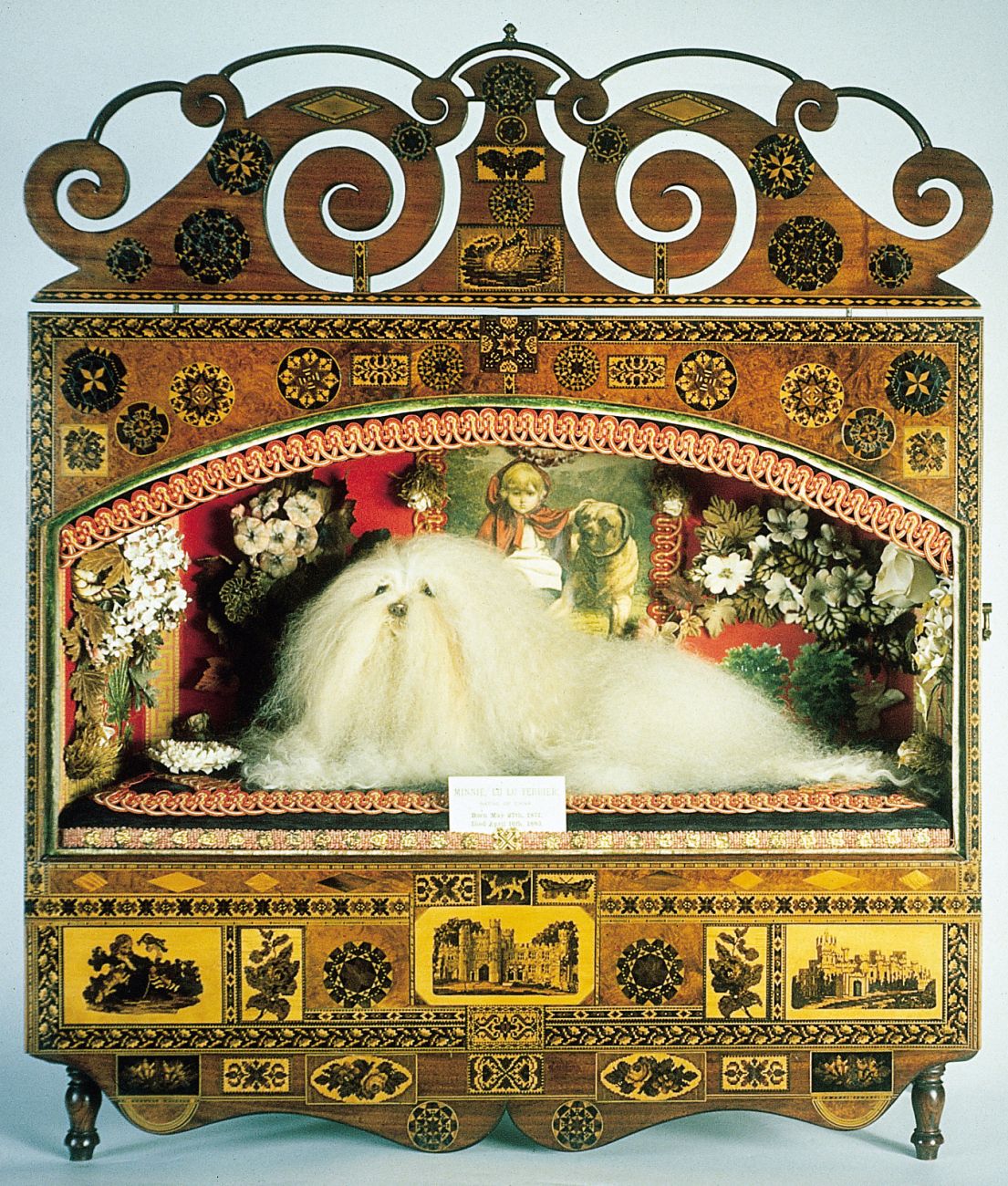 Star of the show - Minnie the Lu Lu Terrier!

The star of the show has to be the unforgettable Minnie, who has been our unofficial mascot since she arrived in our collection in 1987. She is described on the little printed epitaph inside her cabinet as a ‘Lu Lu Terrier, Native of China’, born in May 1871 and dying in April 1883.  Nowadays she would be called a Maltese Terrier.  After her death, Minnie’s devoted owner commissioned this extraordinary display cabinet from the local wood mosaic known as Tunbridge ware.  Tunbridge ware was a craft tradition going back to the late 1600s, producing wooden souvenirs to meet the changing tastes of visitors.  Minnie’s cabinet shows off a whole library of the ornate mosaic designs so popular with Victorian customers,  Sadly we do not know the identity of Minnie’s owner.   Whoever they were, I’m sure they would have been delighted that she is still much loved by young and old after 136 years. 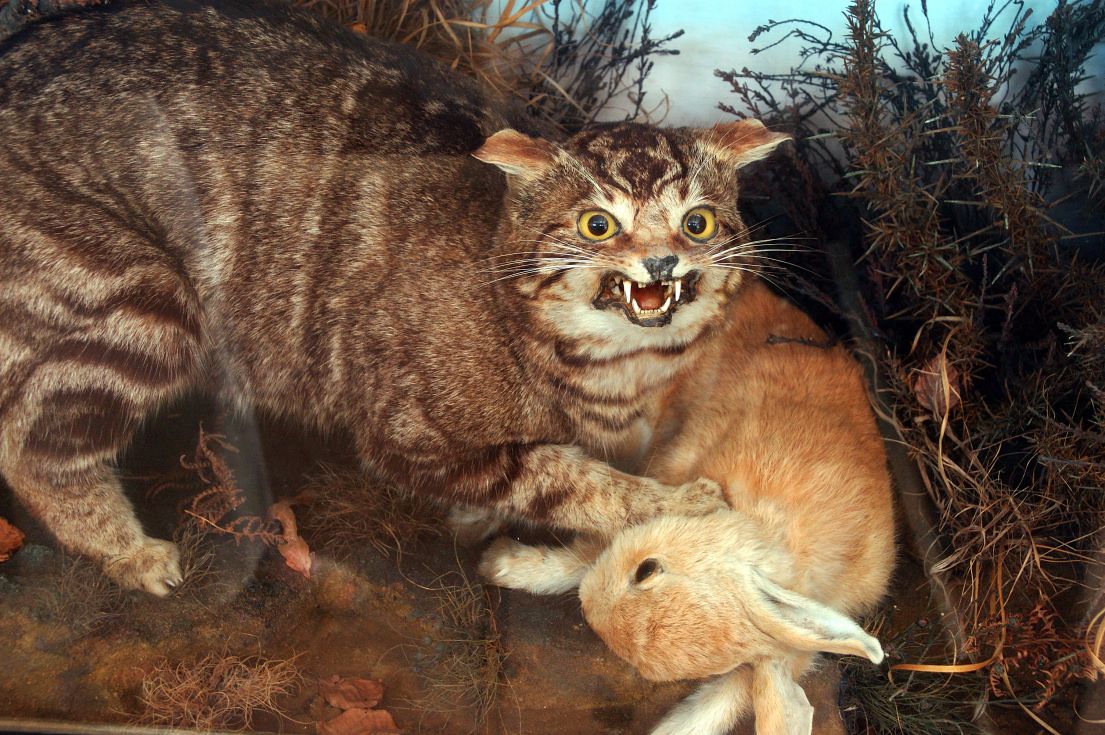 Quite different in character, but also very popular, especially with our younger visitors, is our scary wild cat.  He was shot by a gamekeeper in 1888 on Ashdown Forest, the last great wilderness of south-east England.  Under persecution from humans, wild cats long ago retreated to Scotland, and ours must have been one of the last to roam south of the border.  We can imagine the gamekeeper instructing the local taxidermist to make his kill look as formidable as possible.  Guarding his prey like a miniature tiger, he challenges us not to come any closer. 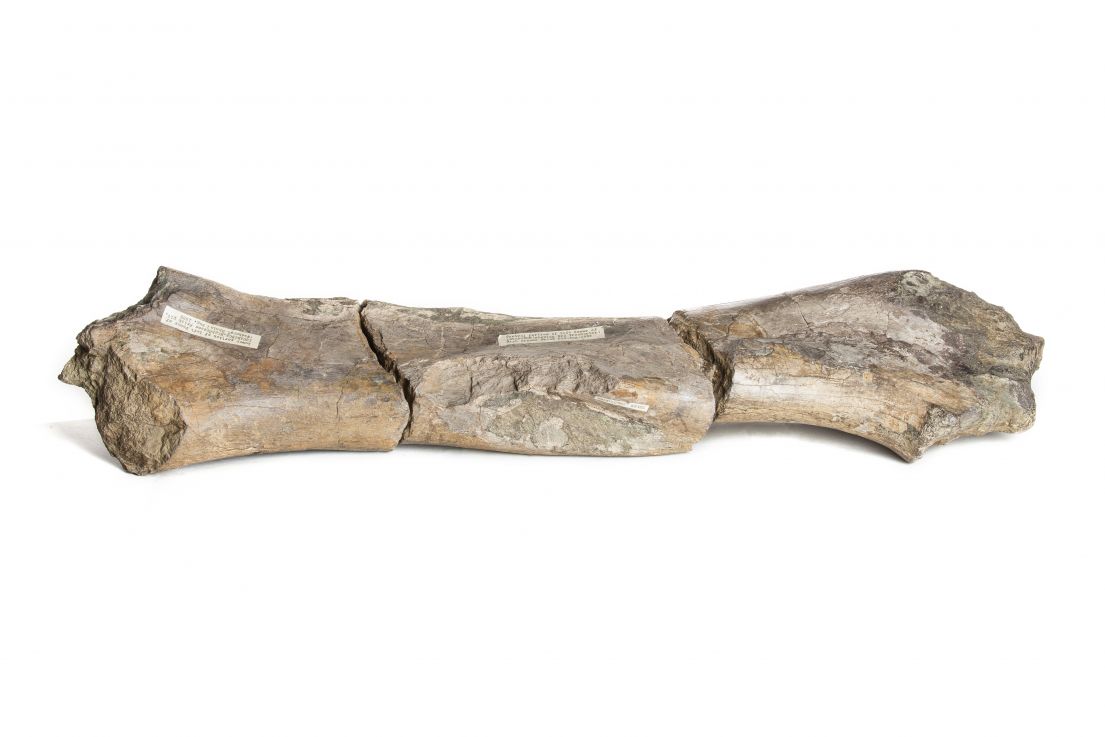 Let us hear you ROAR! Tunbridge Wells has its own local dinosaur

From an extinct local creature of historic times, we move into deep history with the leg bone of our very own local dinosaur.  Traditionally it was known as Iguanodon, discovered by Gideon Mantell in nearby Maidstone and one of the original three dinosaurs that were first used to define the group, but the nomenclature of iguanodonts is currently in a state of flux.  Iguanodonts were herbivores, roaming the High Weald in herds during the early Cretaceous period around 135 million years ago, their remains preserved in the local sands and clays.  This bone is one of a number of finds discovered by workman George Latter at the High Brooms Brickworks in 1933 and sold to the Museum for £1. 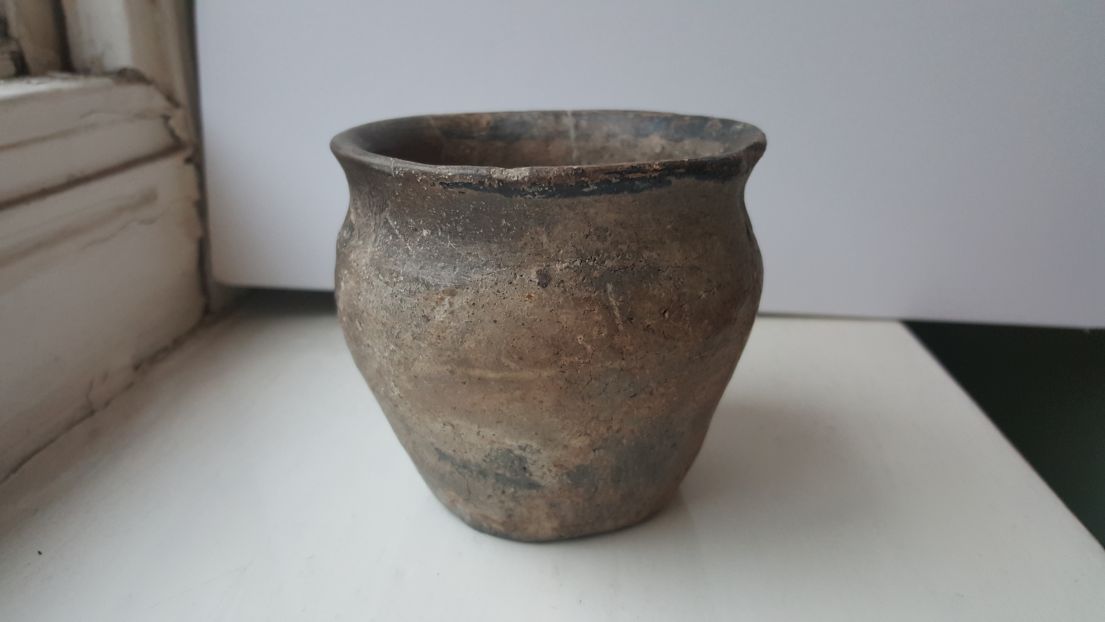 Iron Age hill forts are prominent features of the local landscape, and many iron-working sites of this period are dotted across the High Weald, but we have little direct evidence of the people who lived here at that time.  This small pot was found in 1910 on the border of Tunbridge Wells and Southborough, in association with a much larger cremation urn which has not survived.  The pot contained two fascinating votive offerings, one a prehistoric sea-urchin from the chalk, and one a Neolithic axe-head.  Both types of objects were credited with magical properties in historical times, and this deposit is tantalising evidence for similar beliefs in a much more ancient culture. 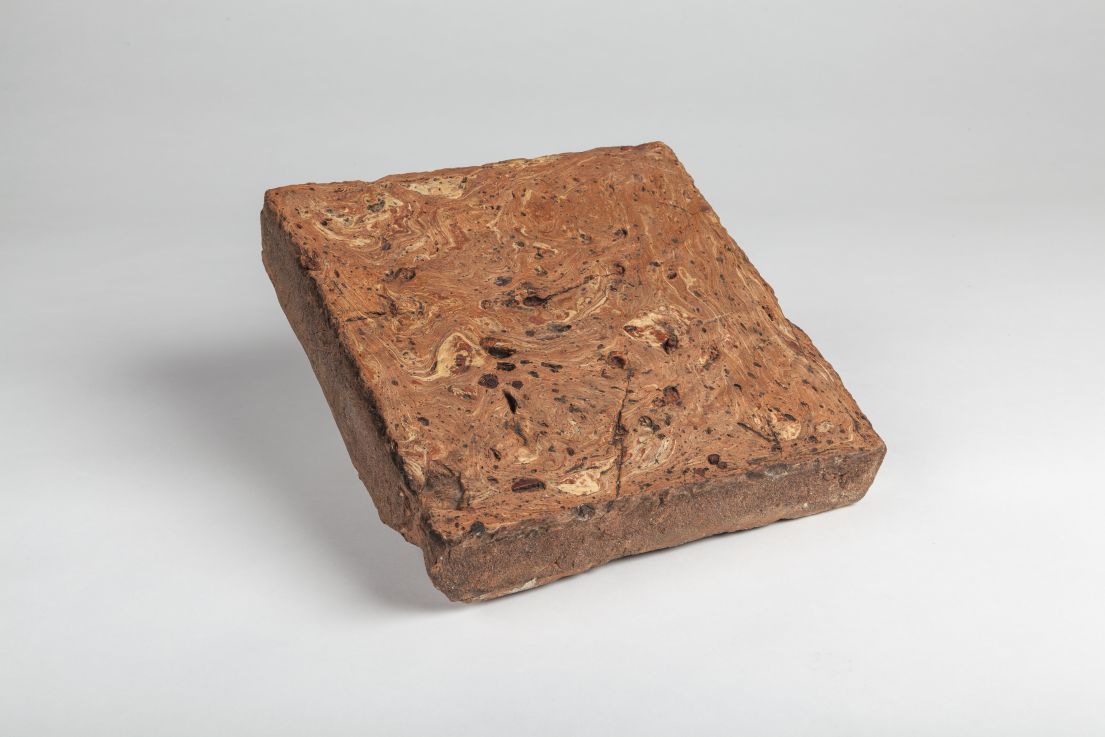 It looks so humble, but these tiles were the legacy of a royal incident and now define an area of Tunbridge Wells

Tunbridge Wells is Britain’s oldest holiday resort.  It was a venue for rustic holidays centred around ‘taking the waters’ of the chalybeate spring popularised by Dudley, Lord North in 1606, and claimed to have amazing health-giving properties.  The royalty, nobility and gentry who first resorted to Tunbridge Wells felt they were having a real adventure in a spot that, while only 30 miles from England, felt much more remote. Tunbridge Wells in the 1600s and 1700s had a definite ‘Wild West’ atmosphere, and at the heart of the frontier town that sprang up around the spring was the Walks.  Here visitors promenaded ‘to see and be seen’, and the Master of Ceremonies, supported by local entrepreneurs, offered a daily round of entertainments and diversions.  When the future Queen Anne came in 1698, her little son the Duke of Gloucester slipped over on the muddy Upper Walk.  She gave money for the colonnade to be paved, but returned next year to find the work had not been carried out.  Angrily leaving town, she vowed never to set foot in the Wells again.  The inhabitants did then get to work, and laid square tiles of local clay which gave the place its current name of the Pantiles.

Late Victorian Tunbridge Wells was proud of its ‘progressive’ policy, spearheaded by the new Borough Council set up in 1889, which boasted figures like Sir David Lionel Salomons, inventor and motoring pioneer, among its early mayors.  The progressives wanted the town to be at the forefront of new technology.  Having already staged Britain’s first motor show and inaugurated mains electricity, the Council embarked on creating England’s first municipal telephone system.  This enterprise was also celebrated as an example of ‘municipal trading’ – or as its opponents called it ‘municipal socialism’ – whereby the Council ran its own utilities for the public benefit.  This silver-plated sample of the original telephone cable was presented at the grand opening ceremony in 1901  in which special guest  the Lord Mayor of London dramatically demonstrated the potential of this new technology by making  a long distance call to his counterpart in Glasgow.

Most of our collection will be in off-site storage until the opening of The Amelia at the Amelia Scott (The Amelia), our new integrated museum, library and adult education building, in 2021.  However, a representative selection of objects will be on display in the temporary library which is shortly to open in Royal Victoria Place.  Enquiry, research and outreach services will continue throughout the closure period.  Our new facility will include increased display space, and will also offer much improved access to collections generally through a new local history archive and reading room, along with open and visitable storage.

Ian Beavis is Research Curator in Tunbridge Wells Borough Council’s Cultural Team.  His role is to discover and interpret the stories behind the collections, developing our research policy, and facilitating external research on the collections and associated themes.  He writes and lectures regularly on local history and natural history.