The March of the Women: Surrey’s Road to the Vote

Earlier this year I met Rosie Everritt, project archivist at Surrey History Centre and was so inspired by their project I signed up to volunteer. Uncovering the stories of local people involved in the campaign for the vote, ‘The March of The Women: Surrey's Road to the Vote’ is just the kind of thing we at Heritage Open Days love.  Here’s Rosie to explain better and tell you some of the 'spellbinding' things they've discovered so far...

They marched for us so we march for them - hitting the streets for the recent Processions march and some of suffragist, Dorothy Hunter's papers including correspondence from Millicent Fawcett

Events in Surrey such as suffragette Emily Wilding Davison stepping out in front of the King’s horse at the Epsom Derby and suffering fatal injuries in 1913, and the suffragette bombing of a house being built for Chancellor of the Exchequer David Lloyd George at Walton on the Hill, are well known, but there are many more local stories to be found in the archives. 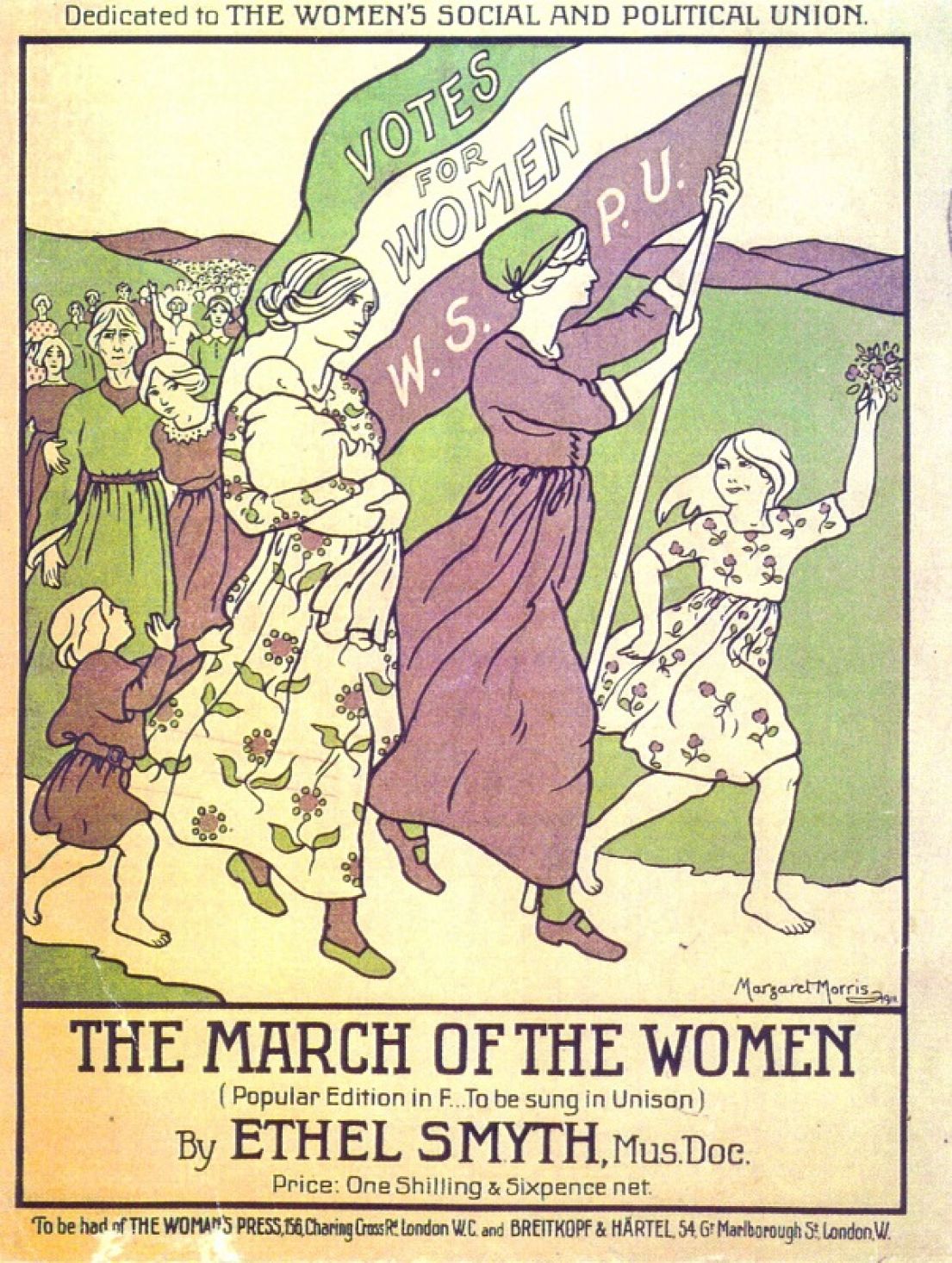 Front cover of Ethel Smyth’s composition The March of the Women, dedicated to the Women’s Social and Political Union (© SHC ref 9180/5)

My role as project archivist is to enhance some of the Centre’s existing catalogues to make the records relating to the suffrage movement more accessible. Surrey History Centre houses a wide range of records which reflect a variety of viewpoints on the issue. These collections include an extensive series of bound letter books of Thomas 2nd Baron Farrer of Abinger who was a male supporter of women’s suffrage and corresponded with prominent member of the National Union of Women’s Suffrage Societies (NUWSS). On the other side of the debate, we hold the papers of Bertha Broadwood who was a female supporter of the anti-suffrage movement and whose papers include a handbill for a meeting of the Dorking branch of the National League of Opposing Women’s Suffrage in 1912.

I’m currently working on the papers of Dorothy Hunter of Haslemere, suffragist and daughter of Sir Robert Hunter, a co-founder of the National Trust, which includes correspondence with NUWSS President, Millicent Fawcett. Dorothy regularly spoke at meetings and rallies in Surrey and further afield, and the newspaper cuttings in her papers give us a glimpse into her talent as a speaker, with one describing her ‘as the Americans would call “a spellbinder”’.

The eagle-eyed of you will have spotted suffragette, composer, writer and former Surrey resident Dame Ethel Smyth on the Heritage Open Days ‘Wall of Women’. Ethel dedicated two years to the cause and her battle song The March of the Women (our project namesake) was sung by suffragettes during marches all over the country earning her a worthy place on the wall. We hold the research papers of Lewis Orchard, an Ethel Smyth expert, which reveal her work as a suffragette and as an early female composer. 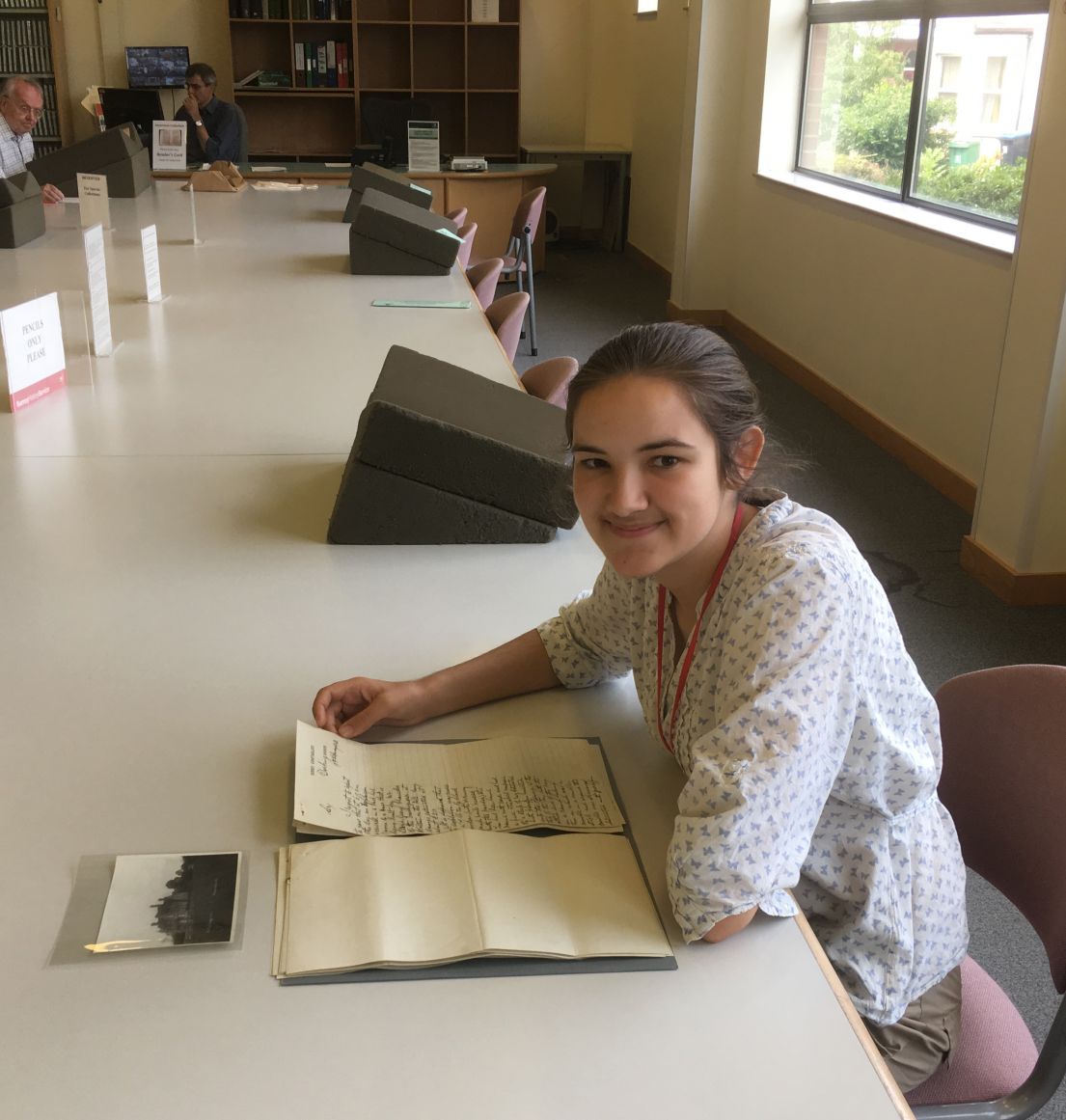 The project has been building a team of volunteers who have been carrying out research into Surrey’s key campaigners, organisations and events connected to the suffrage movement. Sarah, kindly joined us for a few days to research Helena Auerbach, President of the Reigate, Redhill, and District Society for Women’s Suffrage and honorary treasurer of the NUWSS. We are lucky enough to hold the scrapbook for this local society (SHC ref 3266) but for many other local suffrage organisations, records no longer survive. Volunteers have been indexing contemporary newspapers to fill in the gaps and draw out reports on the local events, organisations and individuals who campaigned both for and against women’s suffrage. One volunteer recently came across a report of the November 1906 Guy Fawkes Carnival at Brockham where, shockingly, there was cheering when the guy 'which represented one of the suffragettes with a placard in front on which was inscribed "Votes for Women" caught fire'! 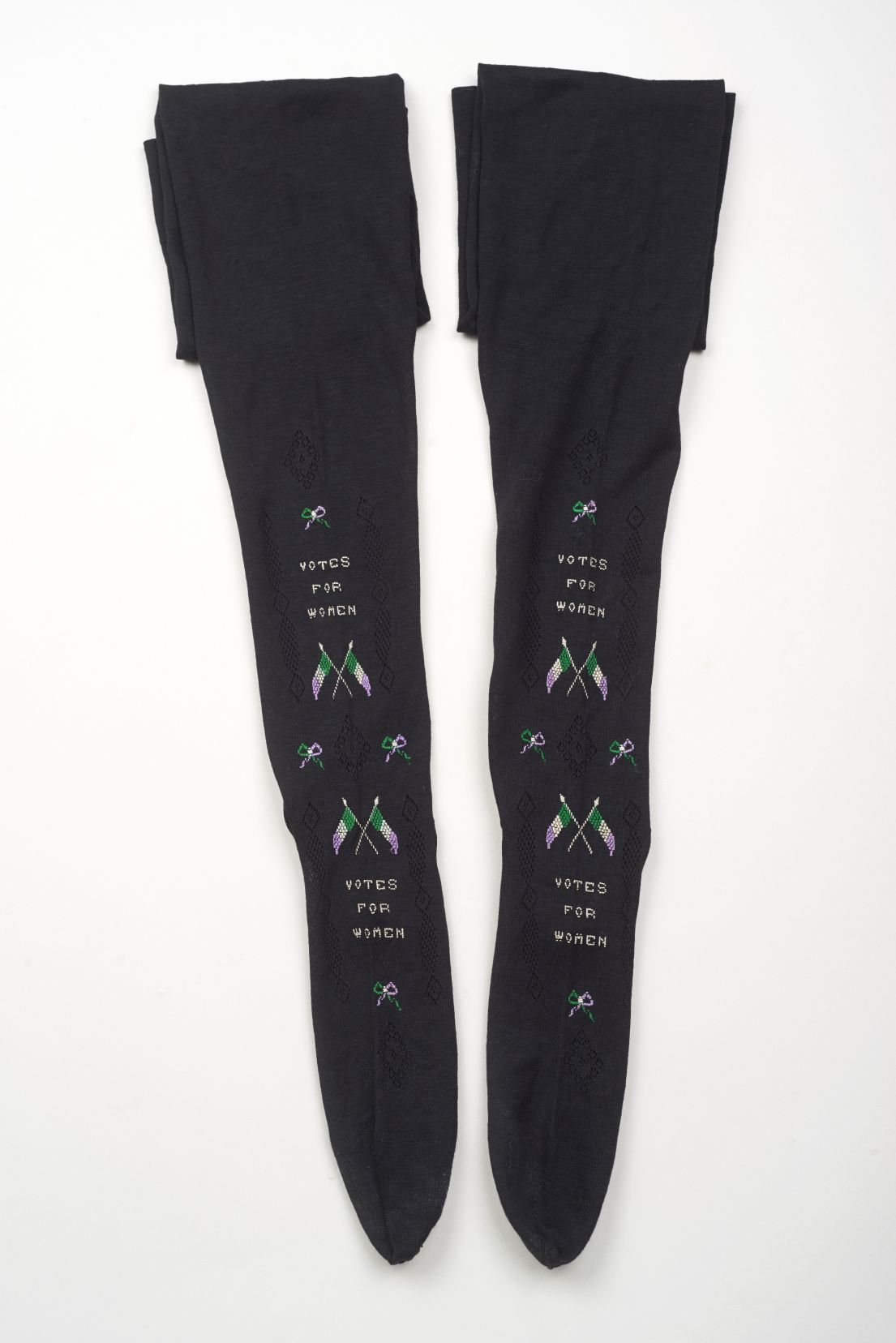 For the first time, Surrey History Centre has been working with five partner museums in the county to carry out an audit of the suffrage collections they hold. This information will also be made available on our Exploring Surrey’s Past website with details of how researchers can access them. One of the items held locally includes an incredible pair of stockings embroidered in suffragette colours with the words ‘votes for women’, dated to around 1908-1910, held by Chertsey Museum. Items from these collections and information uncovered over the course of the year will feed into our travelling exhibition at the end of the project which will tour various locations across Surrey.

The project seeks to bring these local stories to new audiences and provide a legacy for the next generation. Students from three Surrey secondary schools have been working with a local playwright to produce a radio-play podcast about the suffrage movement in Surrey, taking inspiration from our collections. The final edit was fittingly launched at Epsom racecourse, in honour of Emily Wilding Davison, and will go on to form the core of a free online learning resource which will be made available to local schools and students to supplement teaching by providing the local dimension to the national struggle.

The March of the Women project will be taking part in Heritage Open Days with a display at The Leatherhead Institute, organised by Mole Valley District Council. The display will feature information about the project with reference to research carried out about the suffrage movement in the Mole Valley area and the Extraordinary Women who lived there.

To read more about the project, you can visit our website at: www.exploringsurreyspast.org.uk You can also keep an eye on our project blog and Twitter @MarchoftheWomen as more information about suffrage in Surrey is uncovered. On 24th November 2018 we will hold a Project Finale Community Day as an opportunity to celebrate and share all that we have discovered over the course of the project, with a range of talks from local researchers. If you would like to find out more or enquire about joining our volunteer team, please do contact me at: rosemary.everritt@surreycc.gov.uk or 01483 518782.

‘The March of the Women: Surrey’s Road to the Vote’ is a project, based at Surrey History Centre and supported by the Heritage Lottery Fund, to mark 2018 as the centenary of the Representation of the People Act 1918, which granted some women over 30 the right to vote in national elections. The project aims to discover and share Surrey’s significant role in the long campaign for women’s suffrage and explore the contributions made by local women and men on both sides of the fierce debate.