‘Your Ever Loving G’

Such a simple phrase to sign off a letter, but the hunt for 'G' has ignited a spiralling story of love that's inspiring people across the globe. Words have never been more powerful and old fashioned letters can really become sparkling diamonds. Here is our modern detective, Mark Hignett, to tell the tale... 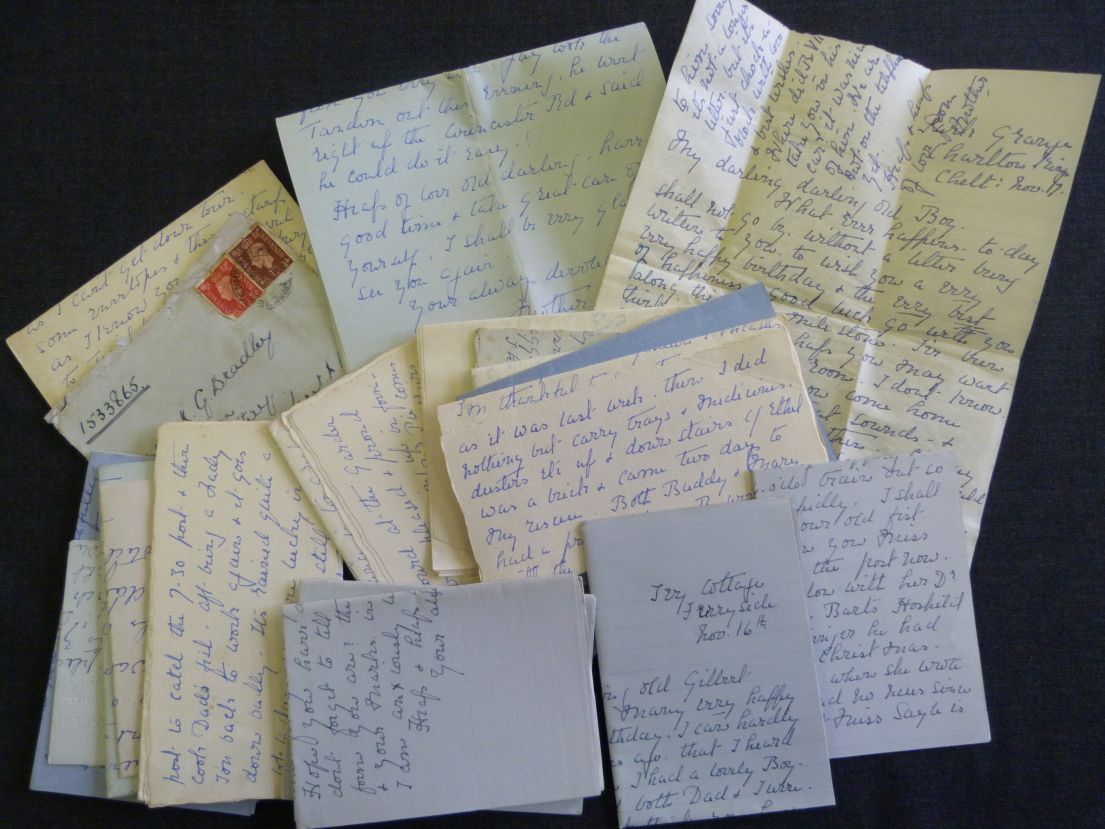 Our journey started in 2012 when I opened Oswestry Town Museum and had a general search on e-bay for all things Oswestry related. I noticed 3 letters for sale that had been sent to a Gilbert Bradley undergoing his basic training in Park Hall Camp, Oswestry in WWII, one from his mother, one from his father and a third signed from ‘your ever loving ‘G’.

I bought the letters to loan to the museum for a display demonstrating that men from all over the country came to Oswestry for military training. The next week the seller, a military mail specialist, put 3 more letters up for sale so I bought those too as 6 would make a more impressive display than 3, the next week 3 more, so 9 would be better than 6 and the following week he placed 3 more for sale so I thought a round dozen would complete the display nicely.

Unfortunately (or not as it turns out) I was outbid on the 3 I needed to make a nice dozen, (those who know me will tell you never to outbid me on e-bay) determined not to lose any more letters I embarked on what can only be described as total madness and over the next 18 months I purchased almost 1000 items related to Gilbert. 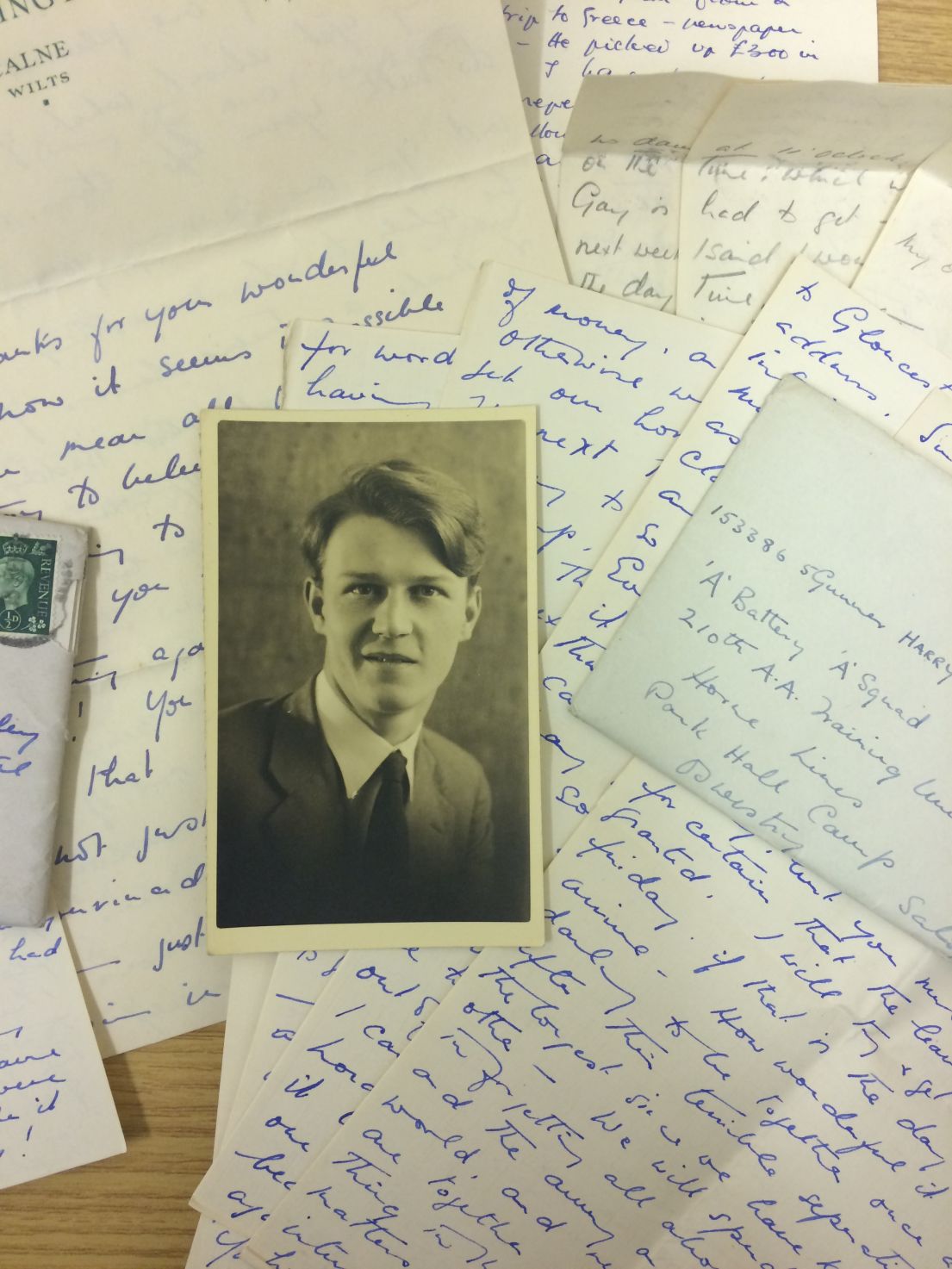 Early on we could see that the letters contained a fantastic description of what life was like during the period of WWII. Letters from family members contained news about the war, bombing raids, shortages and difficulties of all sorts whilst those from ‘G’ told us what it was like to be in love and separated by the war, so we started to transcribe the letters to make the story available to our visitors.

In 2014 we uncovered what we now call ‘The Big Reveal’ and this is when we discovered that your ever loving ‘G’ was in fact Gordon Bowsher, another soldier and the story was really just beginning...

A love 'for all the world to see'

In 2015 I was driving to the museum and listening to Eric Smith on Radio Shropshire who was interviewing one of the organisers of the Shrewsbury LGBTQ history festival during which a remark was made about other possibly unknown stories related to the Shropshire area. I pulled off the road and rang Radio Shropshire to tell them about the story we were uncovering in Oswestry Museum.

And that’s when things got more than a little mad - remember we are a small, volunteer led museum in a North Shropshire town, open 3 days a week. So when BBC Midlands Today contacted us to ask if they could film in the museum it was a massive event for us but in fact it was just the beginning. Caters News Agency arrived next, passed the story on to the Mail Online and Metro who both ran spreads on it and we started getting contacted by people from all around the world. 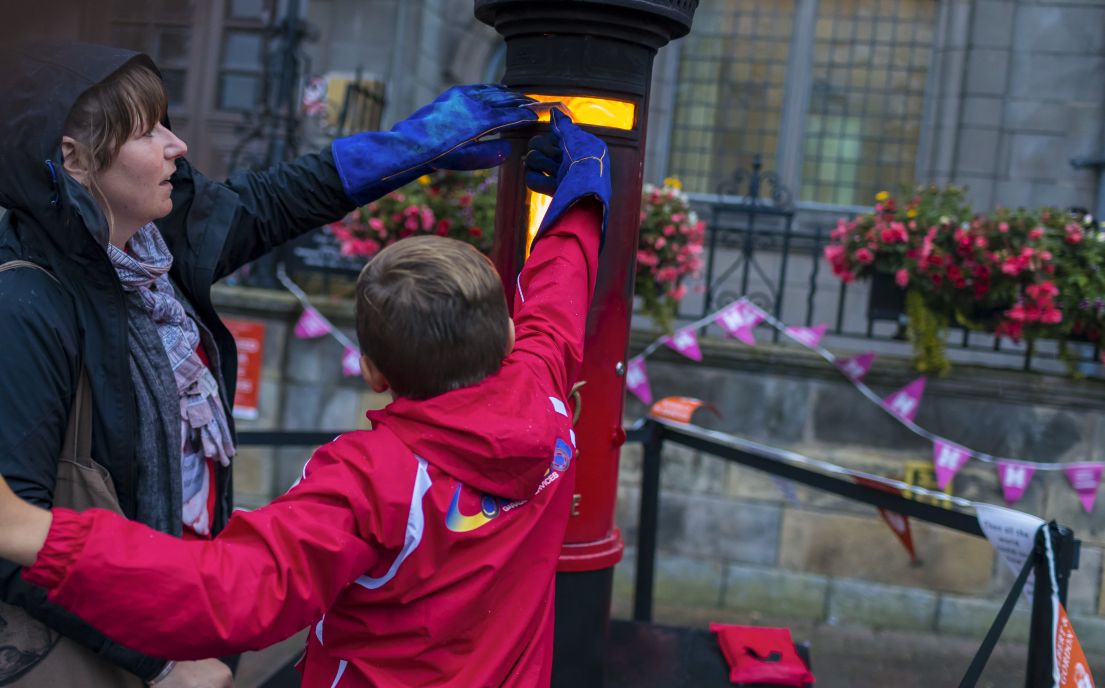 FROM INK TO ASH... A special postbox was created to burn people's own love letters, inspired by the story of Gilbert & Gordon / © ChrisLacey

The amazing thing about these letters is that the 500+ from ‘G’ (Gordon) to Gilbert were written over a period of under 4 years. We have the letter ‘setting’ them up in 1938 and their relationship appears to have ended in 1942 but the main body of letters were written 1939-1941.

Despite the dark times the letters reveal two guys living life to the full, talking about who they meet, where they go and reminiscing about times spent together. There doesn’t appear to be any coded messages, the letters are open, frank and full of the love that they felt for each other.

Their story resonates with everyone that hears about them and they have the proven ability to make people more understanding, more accepting of love in all its many diverse forms.

In one letter in late 1940 Gordon writes to Gilbert and says ‘do one thing for me in all seriousness, burn all my letters’ which of course Gilbert didn’t do because they still exist today but about a month later he wrote again, and this time he said ‘I have been reading over a lot of your letters, and I feel that they should all be published one day, when the world becomes wiser and more broadminded’ 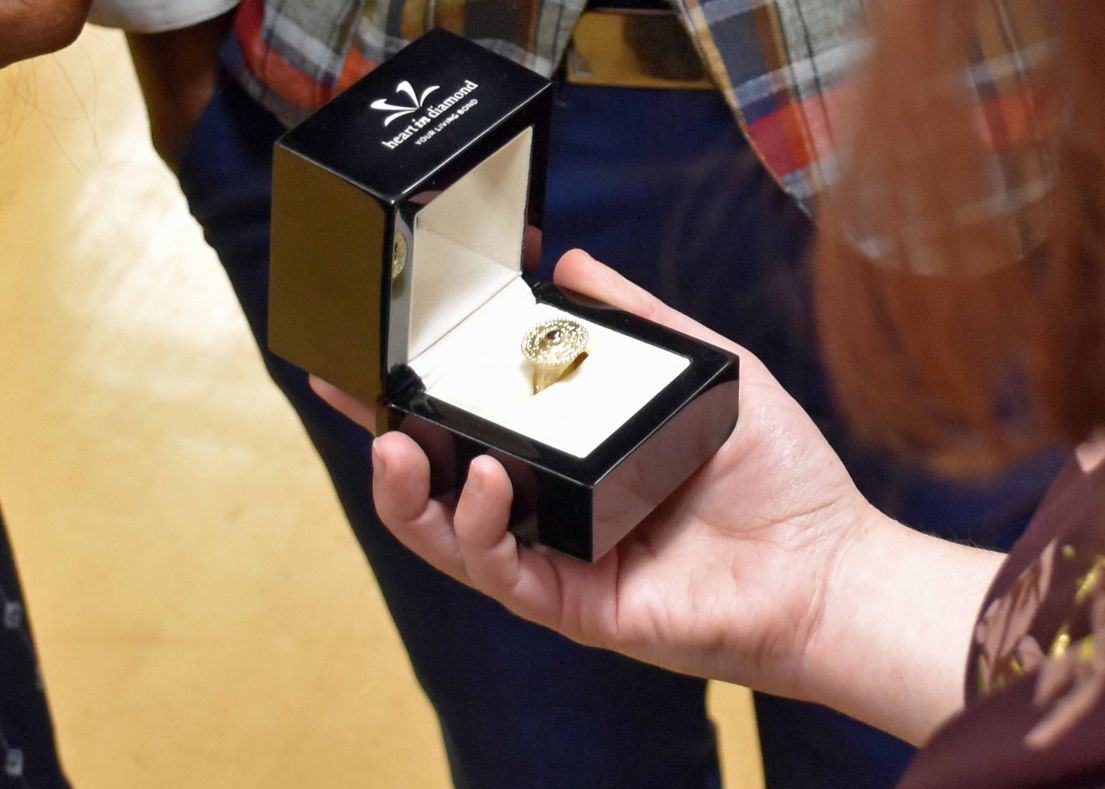 ... TO DIAMOND: A sparkling diamond ring was created from the ashes and inscribed with words from Gordon's letters.

These 2 letters led to the Unsung Stories project during Heritage Open Days in 2017 which saw a diamond created from the ashes of over 800 ‘secret’ love letters from around the world that were burnt in a special postbox over the festival.

Gilbert and Gordon's story is now being used to front equality and diversity projects across the country and beyond. In this month alone 3 presentations to Chester University Campuses are planned, plus a talk to 400 pupils of yr 10 and yr 11 at a secondary school in Shropshire and a number of smaller talks to groups.

And the story keeps growing, last year an online news item about Gilbert and Gordon saw in excess of 500k views. Whilst a Hollywood film producer has written a 10 part series which is currently under evaluation and has plans to script a film. And this spring a composer from the USA is flying over to discuss turning their story into a musical.

Gilbert and Gordon didn’t stay together but their story has become an inspiration thanks to Gilbert keeping the letters that were written to him by Gordon around 80 years ago. 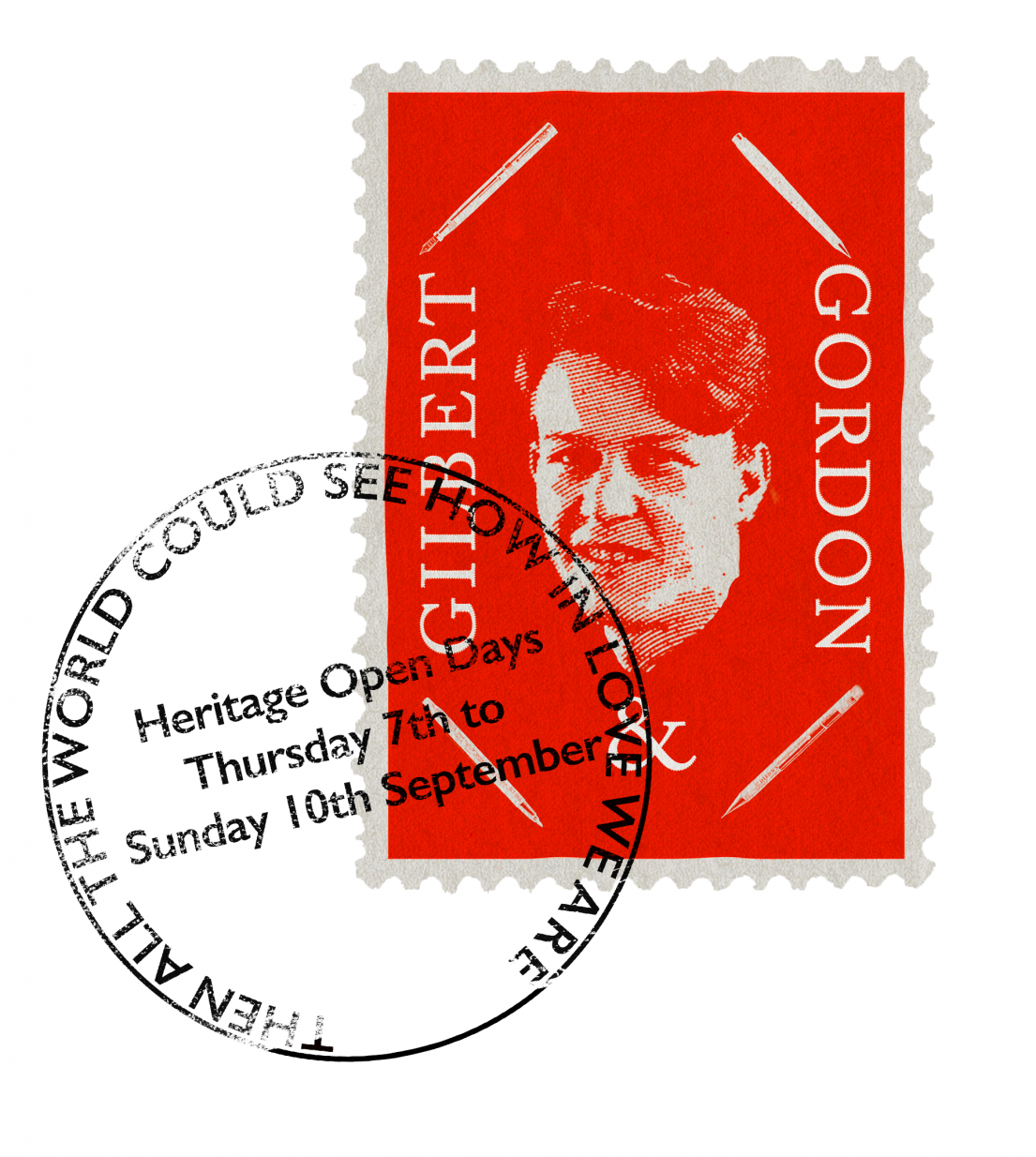 Intrigue and fun seemed to follow them both throughout their lives and we are very excited to be a part of sharing their story now that we are living in a world that is trying to be ‘wiser and more broadminded’.