I am a great fan of Heritage Open Days, so I was keen to find somewhere suitable to visit whilst staying in Yorkshire. I was surprised to find something that combined my individual interests of gardening and railways, in the shape of Poppleton Community Railway Nursery (PCRN). Perfect! 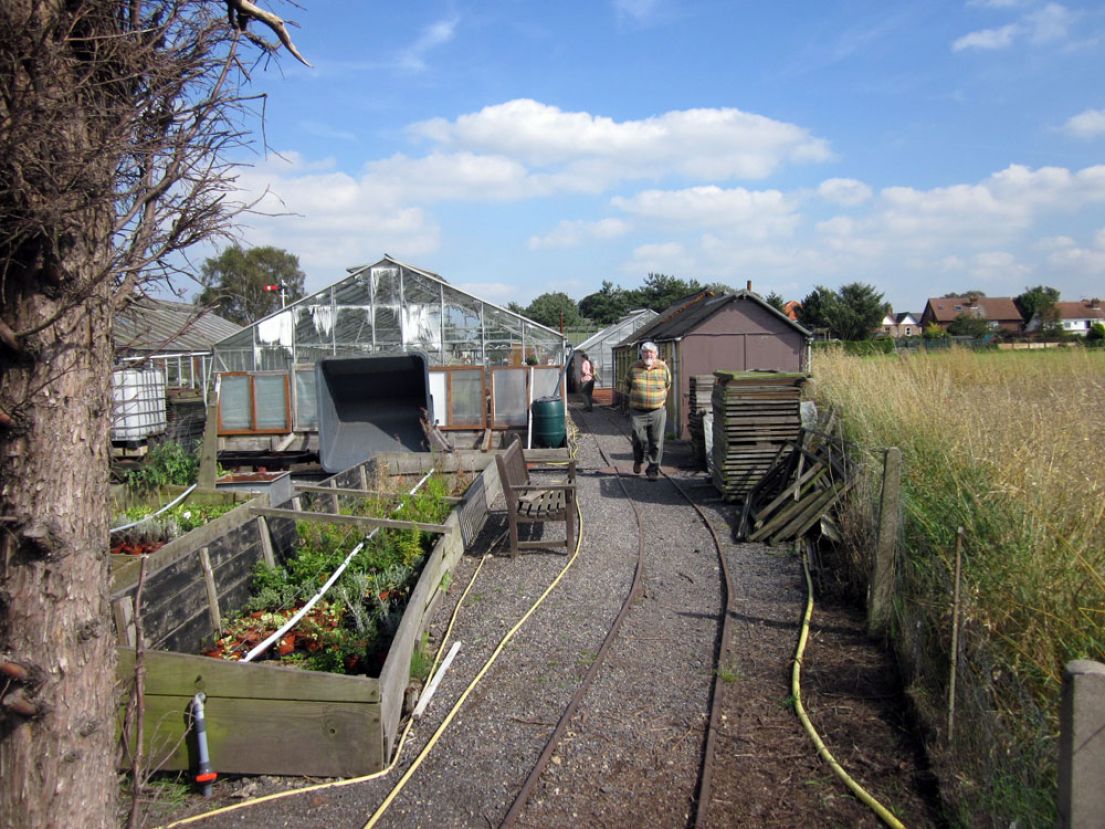 Upper Poppleton is a pretty village just outside York on the York to Harrogate railway line. Right by the flower bedecked station is a rich slice of little known railway history. PCRN is the last remaining garden nursery of the six that used to supply flowers and vegetables to stations and other railway properties up and down the land. One of the volunteers kindly took us round on a guided tour, which was absolutely fascinating.

The nursery started during the Second World War, when the Dig For Victory campaign meant the railway company had to look to its own resources to provide food for its workers' canteens and railway owned hotels. In 1941, the land at Poppleton Station's Goods Yard was pressed into service and so the garden nursery was born.

After the War, and the nationalisation of the railways into British Rail, attention initially turned to the provision of shrubs and trees to stabilise bomb damaged railway embankments. Soon afterwards, production changed to supplying flowers for the tubs and hanging baskets used along the East Coast Main Line. Supplies were often taken to London too. Once a week an entire carriage (emptied of its seats) was parked at the station ready for packing with flowers to be taken down the line to the capital.

During the 1980s a miniature railway was installed to transport materials and plants around the site. It seems this was a whim of the nursery manager at the time!

Towards and beyond railway privatisation

British Rail continued to invest in the nursery well into the 1990s. The gas lamps were finally replaced in 1991 and the boilers converted from coal to bottled gas. As well as supplying the railway, diversification was also tried to keep the nursery in profit.

Surprisingly the nursery remained open when British Rail was privatised and the site became the local office for Jarvis, one of the companies who used to maintain our railway infrastructure. The greenhouses gradually fell into disrepair and Jarvis finally abandoned the site in 2006.

By then Poppleton was the only remaining railway nursery and a group of railwaymen were keen to save it. Jarvis were persuaded to provide the secure lineside fencing required and the site was eventually re-opened and leased from Network Rail in 2009 on a rolling 3-year basis.

The nursery is run by volunteers as a community based, not for profit venture. Lots of repair work is still needed and where possible this is done by linking with other local groups and initiatives. Horticultural therapy is another key strand in the group's work and the nursery works in partnership with the local NHS.

Plants are grown and supplied to local stations like Poppleton and to some along the Settle to Carlisle line. Regular plant sales are held at the nursery and local hospitals. These form a major source of income. Membership is also available for a mere fiver. I've joined to show my support as we didn't have room in the car to bring any plants home.

When we think of 'heritage' it's often of castles, stately homes and other grand or ancient buildings. It's great to see there's room for our more recent history under Heritage Open Days' sheltering umbrella. Without it - and the hard work of the band of enthusiastic volunteers we met on the day - I'm sure Poppleton Community Railway Nursery could so easily have been lost forever.

This is just the kind of unusual project and place I like to find.

If you are interested in gardening, veg and Wiltshire, you may be interested to read Michelle Chapman's blog http://vegplotting.blogspot.co.uk/