Ever wondered about those little green huts in London? Thanks to the Cabbie's Shelters Project you can now find out more and visit them this September... 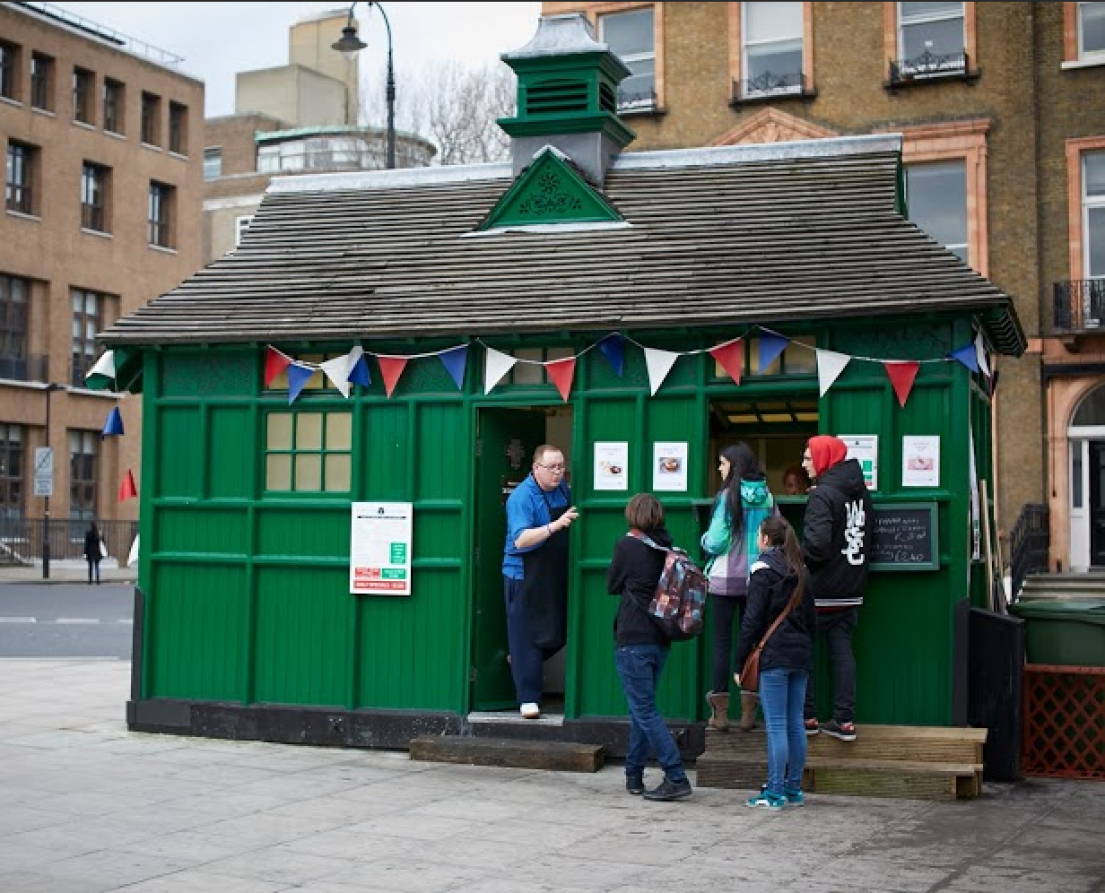 In the nineteenth century London's cab drivers were legally required to stay with their horse and carriage while at a cabstand, come rain or shine. As a result it was difficult for them to get hot meals or shelter, apart from finding a nearby public house and getting someone to guard their cab (for a price). To help alleviate this problem, and in an attempt to lower the cabdriver’s temptation to drink on the job, the social reformer, the 7th Earl of Shaftesbury and a group of fellow philanthropists, took it upon themselves to set up the Cabmen's Shelter Fund. Between 1875 and 1914, the Fund built 61 shelters in London.  Because the shelters stood on a public highway, the police stipulated that they had to be no larger than a horse and cart.

Despite their basic design and relatively diminutive size, these shelters catered for up to a dozen at a time. Offering drivers a dry (in every sense of the word) place to rest and eat; they each had a working kitchen, seats and tables, and a selection of books and newspapers - most of which were donated by the publishers or other benefactors.

The thirteen remaining cabmen’s shelters often go unnoticed by drivers and pedestrians, yet as soon as the curators of the Cabbies’ Shelters Project, Danielle Olsen and Sarah Wang, began to explore their function and history, it became clear that these were unique sites for further study and creative inspiration. With the help of a Heritage Lottery Fund grant and support from the Cabmen’s Shelter Fund, the curators were able to commission three outstanding contemporary artists whose work would explore the social, historical and cultural significance of these sites. Of particular interest was looking at these shelters as specific sites of navigational expertise. Only green badge holders are allowed to enter the shelters, therefore all who enter must have conquered The Knowledge – an accomplishment that takes up to four years to achieve.

Artist Kathy Prendergast has created the first visualisation of ‘The Knowledge’, mapping by hand the 320 detailed routes that cabdrivers must master in order to acquire their license. In collaboration with A-Z Maps she has created a beautiful artwork, reminiscent of the brain. To accompany the map, award-winning writer Kevin Barry has written a short story, monologue for cabman. The map and story will be displayed at the Embankment Shelter at the bottom of Hungerford Bridge.

Emma Smith has been exploring the storytelling and musical culture of cab drivers. Working closely with the St John’s Wood shelter (aka The Chapel), Smith has devised a script that will be performed within the shelters for an intimate audience of 12. Performances - based on oral history interviews - will be accompanied by a musical score developed with cabdriver Mark Bird. Smith is also making a film exploring the process of memorising the script – using some of the techniques that cabdrivers employ when learning their trade.

Victoria Turnbull, in collaboration with Chelsea Hospital Community School, has made a learning resource for intrepid explorers, complete with a build-your-own-shelter. Together, they have also created a limited edition of paper cups, inspired by one of the few remaining pieces of material culture left from the early shelters, a ¾ pint cabbies’ tea mug. These will be used to serve drinks from The Temple. QR codes, installed on the outside of some shelters, can be scanned to reveal the ‘secret’ history of the shelters.

There will be a programme of events and tours on specific days and times from 12 Sept – 18 Oct. All details, including a map of the shelters, can be can be found at www.cabbiesshelters.org and follow us on Twitter @cabbiesshelters. Three will be opening up for Heritage Open Days on Saturday 13 September. Find out more about these or look for other events in you area on the event directory.