Do something new in Blackburn

1000 people in 4 hours – welcome to the Blackburn Heritage Festival! Harriet Roberts, the festival coordinator talks us through it in the second of our spotlight blogs... 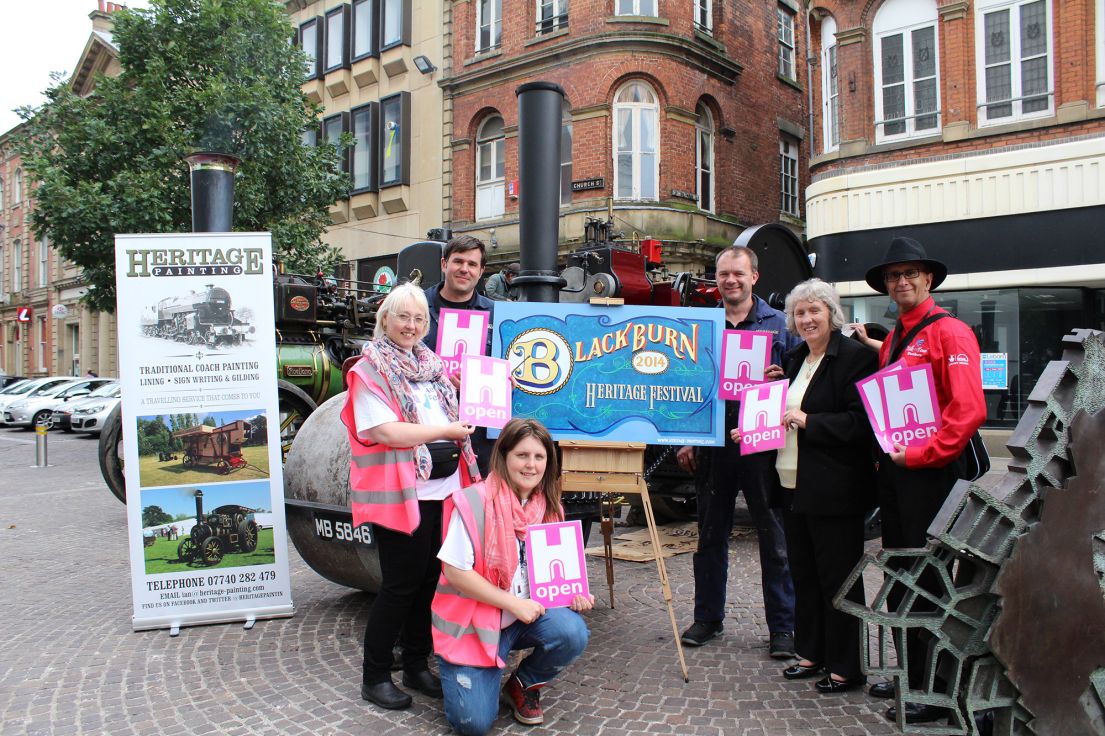 © Blackburn BID - Some of the team behind Blackburn Heritage Festival

1. How long have you been involved in Heritage Open Days?

Heritage Open Days came alive for me in 2007 when I led a group of volunteers to open up the Thwaites Empire Theatre to do some backstage tours for a few hours on a Saturday morning. Having done very little local publicity, I was surprised by the continuous stream of people who had discovered us listed on the national HODs website. It appeared that they had factored in the activity as part of their planned route across East Lancashire for the weekend.  It was a one off event but the memory stayed with me and the seed was planted.

Three years later, I organised a Heritage Open Day for Child Action Northwest, a long established charity with its administrative headquarters in a historic building rooted deep in local folklore. Despite being the home to over 2,000 children since the 1890s, many people had never had the chance to enter the forbidding looking Victorian building which used to have the place name ‘BLACKBURN ORPHANAGE’ carved in heavy stone above the imposing entrance way.

I suspected we might be busy when setting up for our open day on the day before there was already a queue of people turning up a day early by mistake.  Sure enough on the Sunday we had to open the doors early because of the line of people forming in the rain outside. It was a thrill to be able to explain to people how, contrary to local mythology, the Orphanage was always a happy place built on a foundation of love by a philanthropist called James Dixon whose legacy is a charity that still supports thousands of local families every year.

In 2013 I formed a team to round up another 16 venue organisers and we were given a small grant of £600 by the council to promote it as Blackburn Heritage Festival.

2. What makes HODs in your area so special?

What makes Blackburn special is the incredible momentum that’s behind the weekend now. Last year we’d grown to 100 activities taking place in 50 venues across the town centre with ‘Talk of the Town’ guides funded by Heritage Lottery, trimmed off with a vintage fairground and a pop up bandstand, which attracted additional footfall of 20,000 people in two days.

3. What new things do you have planned for this year?

This year’s festival is funded and promoted by the Blackburn BID (business improvement district) as the major annual community celebration in the town’s calendar. New attractions include 4 vintage ‘hop-on hop-off’ buses providing transport for people to get from one Heritage Open Day site to another, a ‘world of wheels’ classic car show featuring the Mobile Museum of Obsolete Technology and a visit to Eanam Wharf by the Kennett a historical barge.

4. What has been your favourite HODs moment?

I will never forget the moment we closed the doors on the first Heritage Open Day at the old Blackburn Orphanage. 1,000 visitors had flooded through the doors in just 4 hours.  People were hungry for history, pushing in front of each other to read the information display boards to scan the photographs, searching to see if they could find any information about their friends and relatives from the past, some ex-residents in tears to have had the opportunity to be back in their childhood ‘home’ which was filled with so many memories, others just wanting to sit and chat and share their stories.

When we finally managed to persuade the last people to leave, I bolted the door and turned round to face a team of exhausted and astounded volunteers, one of whom, Jo was wearing a beautiful brown Victorian dress and bonnet. The poor girl looked like a dehydrated, flattened moth, still almost stapled to the wall where she’d been pinned back by the sheer mass of the crowds.  She’d not had time to grab a sandwich, a cup of tea or get out to the toilet. Nobody quite knew what to say. With incredulity she remained stuck in the spot I’d positioned her in when the doors opened. She stared at me and simply slowly mouthed the words, ‘Oh …..   My …… God!’

Have we whetted your appetite, do you fancy discovering something new in Blackburn?

​If you are looking for further inspiration take a look at our other 'do something new' posts.