First 100 Years: celebrating the centenary of women in law

What's the first thing you notice in this picture? It was taken in 1982 at an event by an international law firm based in London, and its striking gender imbalance sparked a fantastic project looking at the history of women in the legal profession. I came across it last summer as part of our Extraordinary Women research, and asked Annabel Twose to share their work and some of the incredible stories they are highlighting in this centenary year. Over to you Annabel... 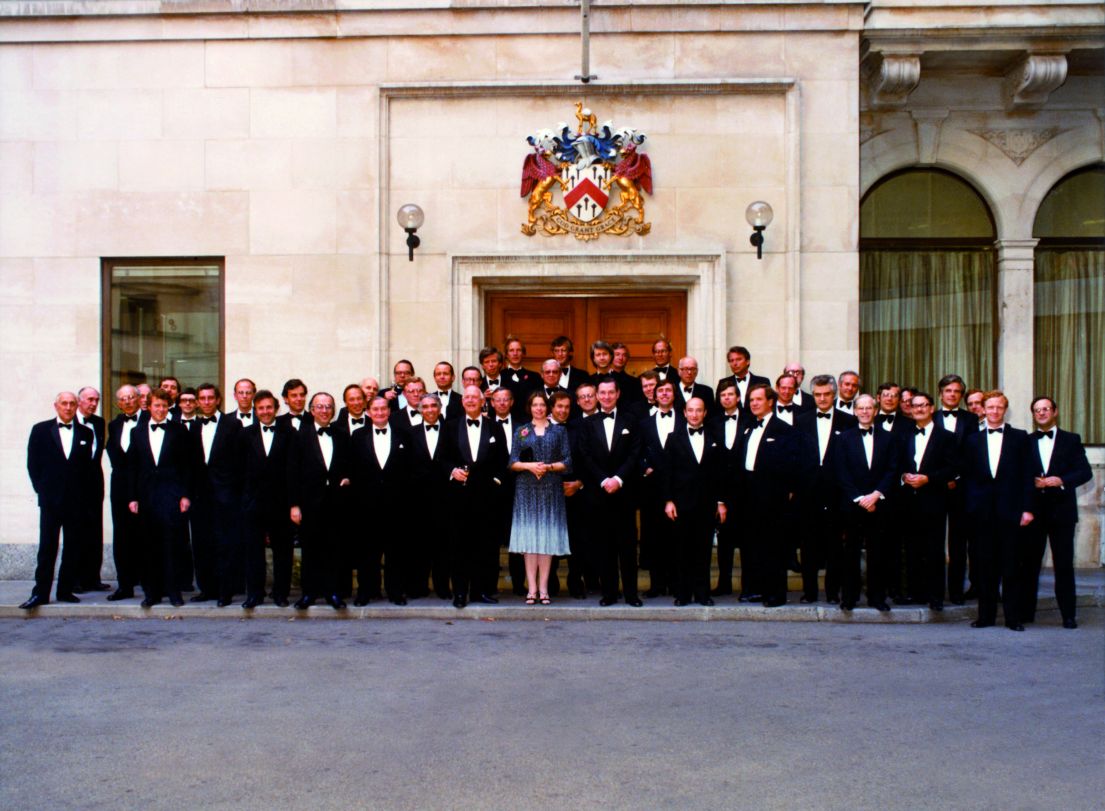 All it took was this photograph of a sole female partner at Herbert Smith Freehills for the founder of First 100 Years, Dana Denis-Smith to become fascinated by the history of women in law. How had there been only one female partner in 1982? What was her story, and how had she felt to be the only female partner? Who had been the first female lawyer and how had they come to practise law?

In researching these questions, Dana discovered it had been less than a hundred years since women had been allowed to become lawyers in the UK. And so, First 100 Years was born, a 5-year project to celebrate the centenary of the Sex Disqualification (Removal) Act 1919, which paved the way for women to become lawyers for the first time. It aims to celebrate, inform and inspire, because only by understanding our history can we ensure equality for future generations of lawyers.

First 100 Years aims to champion the remarkable stories of early pioneers, such as Gwyneth Bebb, whose unsuccessful action against The Law Society in Bebb v The Law Society [1914] argued that the Law Society should be compelled to admit women. The Court of Appeal held that women were not “persons” under the Solicitors Act 1843.

Helena Normanton is another early legal hero. Raised by a single mother, she was the first woman to practise as a barrister in England, and campaigned for women’s franchise, equal pay and divorce reform.

In order to record these remarkable stories, First 100 Years has created the first digital museum dedicated to the history of women in law, including a timeline and biographies of inspirational women. As part of our archive, we are recording a hundred video interviews with successful women from the breadth of the legal profession, which you can access through our YouTube channel.

In one recent interview, Baroness Kennedy QC looks back on her journey from a working-class Glaswegian family to the House of Lords. She reminisces how early in her career, she tried to raise the issue of sexual harassment in Chambers, only to be told she needn’t worry as she wasn’t attractive enough to be sexually harassed.  In another interview, Lady Arden recalls how as a barrister, she would sign her opinions using only her initials, to hide her gender from clients. When she was promoted to the Court of Appeal in 2000, women were still sworn in as “Lord Justice”, although happily that practise has since been changed.

To celebrate the centenary this year, First 100 Years has created an exhibition, marking the key milestones of the last hundred years. The artwork is free to use for schools, libraries and universities and can be downloaded to print from our website. It has already been displayed at Oxford Law School and the Supreme Court.

We have also launched a 10-part podcast series to explore the history of women in law decade-by-decade, and featuring legal practitioners, historians, academics and pioneers. We will examine key themes, such as discrimination, diversity, gender stereotypes and the work/life balance.

Since the First 100 Years project was started, the UK has already seen more landmark moments for women in law. In 2017, Baroness Hale was elected the first female President of the Supreme Court. In 2018, the first case heard by a female majority was held in the Supreme Court and we now even have a first barristers’ chambers called after a woman - Normanton Chambers. There are now more women practising as solicitors than men. This centenary is an excellent opportunity for organisations to reflect on the progress that has been made, and the further changes that are needed before true equality is reached in the workplace.