A Royal Day Out in Gloucester

2016 has been a record breaking year for Heritage Open Days with over 5200 events taking part across the country. As usual, the team spread out to visit some of the hubs and I was lucky enough to join photographer Chris Lacey in capturing the highlights of Gloucester. 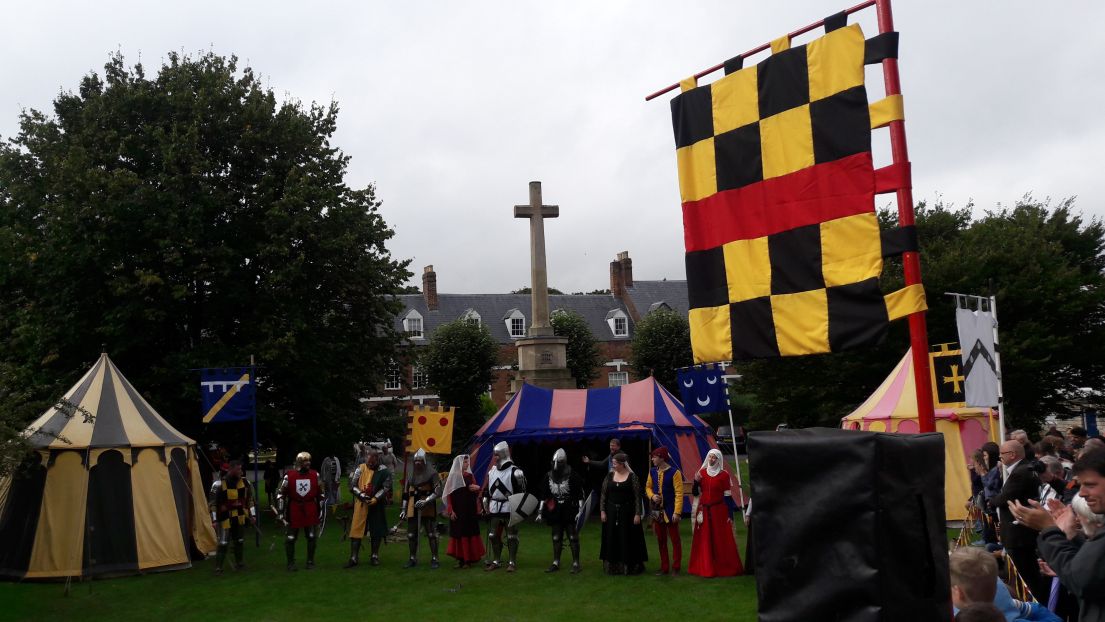 When we arrived, drizzle was settling in but spirits weren’t dampened. The Rococo Players delivered a lively wandering street theatre performance which brought to life many famous figures from Gloucester’s history. Lady Aethelflaed, Beatrix Potter, and Robert Raikes, amongst others, gave powerful speeches on their connection to the ancient city.

We left the performance when it stopped down the street from St Michael’s Tower. The tower served as a meeting point for many guided walks through the city but it also offered its own attractions including the opportunity to try bell ringing, refreshments, and free face painting. Alan Myatt, world’s loudest town crier, stood outside dressed in full medieval regalia. He entertained passers-by and encouraged them to attend the re-enacted coronation of King Henry III.

When the time came for the coronation, we followed a parade from Blackfriar’s Priory in the company of jugglers, stilt walkers, and a vast assortment of medieval musicians. Prince Henry was led by a knight on a white horse before being ushered into the airy space of Gloucester Cathedral. Once inside, we were enveloped by the rich aroma of frankincense and the swirling sounds of choral chanting above the crowd. The prince became a king in the company of bishops, and leading figures of the town including the Mayor and High Sheriff. After he was crowned, Henry III led his court outside for an afternoon of games and tournaments.

Around the corner, we visited the Stonemasons’ Yard where the art of restoring and replacing the stone features of the cathedral is still kept alive. The masons showed us how the plans are drawn to turn plain slabs into exquisitely wrought sculptures. They also demonstrated the fine craft of delicate stone carving and told us about the long journey from apprentice to master.

From one style of fine carving to another; next we visited the Tudor Rooms. Usually the offices of a recruitment agency, once a year it opens to display its wooden panels which are carved in a linen fold style and give a sense of opulence to the room. The Gloucester Life Museum was also in the area and gave an excellent sense of how ordinary people in the area have lived through the ages.

Our final stop for the day was the Living Legends performance at St Mary de Crypt Church. A storyteller, a singer, and a musician came together to perform in one of Gloucester’s best known churches. Tales of horror and wonder were accompanied by songs and music which provided excellent atmosphere.

Actually, the final stop was in one of Gloucester’s many historic pubs which were open for the festival weekend. Talk around the bar centred on the earlier procession and the importance of keeping history alive. This was also one last example of the role Heritage Open Days plays in keeping communities together.