I have a confession to make. I have a soft spot for town criers. Okay, in their frocks, tights and tricorne hats, their faces red and strained from shouting, they don’t make for an obvious sex symbol. But their pluck and wit always bring a smile to my face. There’s something reassuring about this kind of word-of-mouth PR in times when instant messages can travel the globe. And anyway, it’s not just a male business, and never was; apparently husband and wife teams weren’t uncommon in the past, and today, so I’m told, there are some 20 women in Britain filling the post. 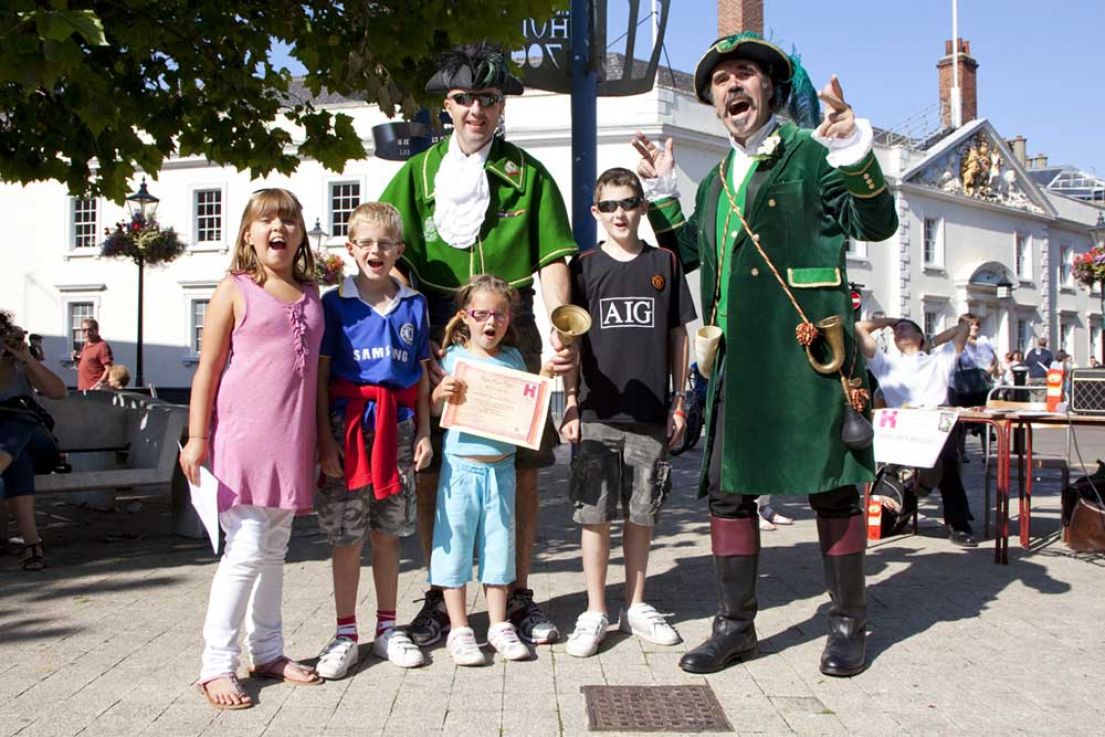 1. While town criers today are mainly ceremonial announcers, in the past they were an essential and trustworthy source of information. From royal proclamations to local news, for centuries, townspeople would hear them proclaimed by a crier or bellman.
2. It really wasn’t a good idea to shoot the messenger when you didn’t like what you heard, as town criers were protected by law.
3. The “Oyez, oyez, oyez!” that often introduces announcements is Anglo-Norman for “Listen!”.
4. Some claim that the expression “something rings a bell” refers to Pavlov’s famous experiments with dogs. I’d like to think that it comes from the bell drawing attention to the town crier’s messages. You can’t put the finger on where you heard it before but you can hear the sound of a bell. Rings plausible, no?
5. “Posting a notice” apparently originates in the town crier’s practice of attaching a message to the doorpost of a local inn after reading it out. That’s why, I imagine, we talk of “blog posts”.

*We asked for you!

But what is it like to be a town crier in modern times? I asked Michael Wood, three-times world champion and Britain’s loudest town crier, who has been in the service of East Riding of Yorkshire Council for 14 years.

Tell us how you became a town crier.

In 1996, The East Riding of Yorkshire Council advertised for a Town Crier after successfully getting back its original county title and disposing of the dreaded name of Humberside that was given to it in 1974. I answered the job ad and after beating off other candidates in a public cry-off I was chosen. I was officially appointed in 1997 and my initial brief was to act as a county mascot, who would help to put the new county on the map.

What got you hooked?

The variety of work, from attending the annual chairman-making ceremony for East Riding of Yorkshire Council; to launching a new airline route when I did a cry on a JET2 aircraft at 10,000 feet; to leading the Christmas Parade each year in Beverley; to giving the up-to-date scores on Hull City’s football promotion hopes at the wedding of a football mad couple – the list is endless.

Is it a proper career?

Although I am a professional Town Crier and available full-time, alas, there is not enough full-time work available. I get an income from town crying but I don't earn a living. It is my army pension from a 22-year military career coupled together with town crying work that helps to keep the wolf from my door. But I am not driven by what I earn; I am driven by waking up and enjoying the challenge of wondering just how the hell I am going to pull off a certain job, such as the one time I proclaimed happy birthday to a farmer’s favourite horse.

There’s no career path for Town Criers. However, one can achieve accolades and awards and certain rankings by attending British and World Town Crier Competitions that are held annually and bi-annually respectively. On officially being appointed as a Town Crier by a council to represent a town, a city, or as in my case a whole county, criers can join The Ancient and Honourable Guild of Town Crier (AHGTC) and The Loyal Company of Town Criers (LCTC), two organisations that employ codes of conduct and working practices.

What skills or qualities do you need to be a town crier?

A good voice, a good pair of legs, a sense of history and a sense of humour – the latter quality is absolutely vital for ignoring the odd cheeky comment that is aimed a Town Crier’s way because it is not often you see a man going to work wearing tights and frilly lace, as the public are keen to point out.

So were there ever any awkward moments for you?

Too many! Town Criers often muffle the clappers in their bells but this often leads to forgetting to remove the muffler before ringing it, which results in a laugh from an audience when no sound is heard. (I was that Town Crier!) I have even forgotten my bell when stepping onto a podium and I have since employed a crumhorn, which is fastened to my body by a sling. However, I always have to check my crumhorn before using it because when I am not looking, it is tempting for pranksters to sneakily place something in its opening aperture, which gets blown out on use.

And any special highlights?

As an ex-soldier it had to be attending 4 different freedom parades for the Yorkshire Regiment between 2008-2010 held at Bridlington and Beverley, when I acted as a narrator in town crying mode for the massive crowds supporting our troops.

What do you do outside your town crier commitments? Do you have any other passions?

During the summer months my work is mainly as a Town Crier, but during the winter months I also do Father Christmas – ah, the magic of make-up. When not working, I like to write. I did in fact convince Hollywood that they needed a Town Crier. I worked there from 2000-2003. This led me to write a book called Poetry In Motion Pictures and is based on my studies into the history of Hollywood.

Tell us about your involvement in Heritage Open Days this year.

This year, it will be mainly as a cinema enthusiast talking about the glory days of cinema in Hull. However, in Town Crier attire, acting like the Pied Piper of Hamelin, I will again be leading a massive pram parade through the streets of Hull (which I did in 2010). This is something that absolutely delighted the public, especially the mums.

Watching the kids at my Town Crier Masterclass in 2009 and 2010, competing with their parents for the loudest voice and seeing the kids enjoy the chance to shout without being told to shut up! The kids also love to be able to use the noise attention seeking tools that I provide, which includes: a bell, a crumhorn, a trench rattle, a drum and a car horn.

Do you think it’s a tradition that will survive the 21st century? Or are town criers a dying breed?

Word of mouth always has and always will be the most basic form of communication. People like the personal touch and as such there will always be a welcome for a more colourful way of literally shouting something from the rooftops. One thing I haven't mentioned yet is that I have had a coffin made in the shape of a bell, and I have written an epitaph which I hope will be cried out loud and followed-up by a minute’s noise from all in attendance at my final farewell. Some want to go out with a bang, I will settle for a bong!

You can experience Michael Wood often in action as part of Hull's Heritage Open Days weekend. For more information on what's on in Hull, check out www.hodshull.co.uk