Faces, ships, writing, architectural designs – these are just a few of the hitherto invisible ‘mysteries’ within Norwich Cathedral being revealed by an award winning archaeological project, the Norfolk Medieval Graffiti Survey (NMGS). I am Deputy Director of this project and want to share some of our discoveries with you here... 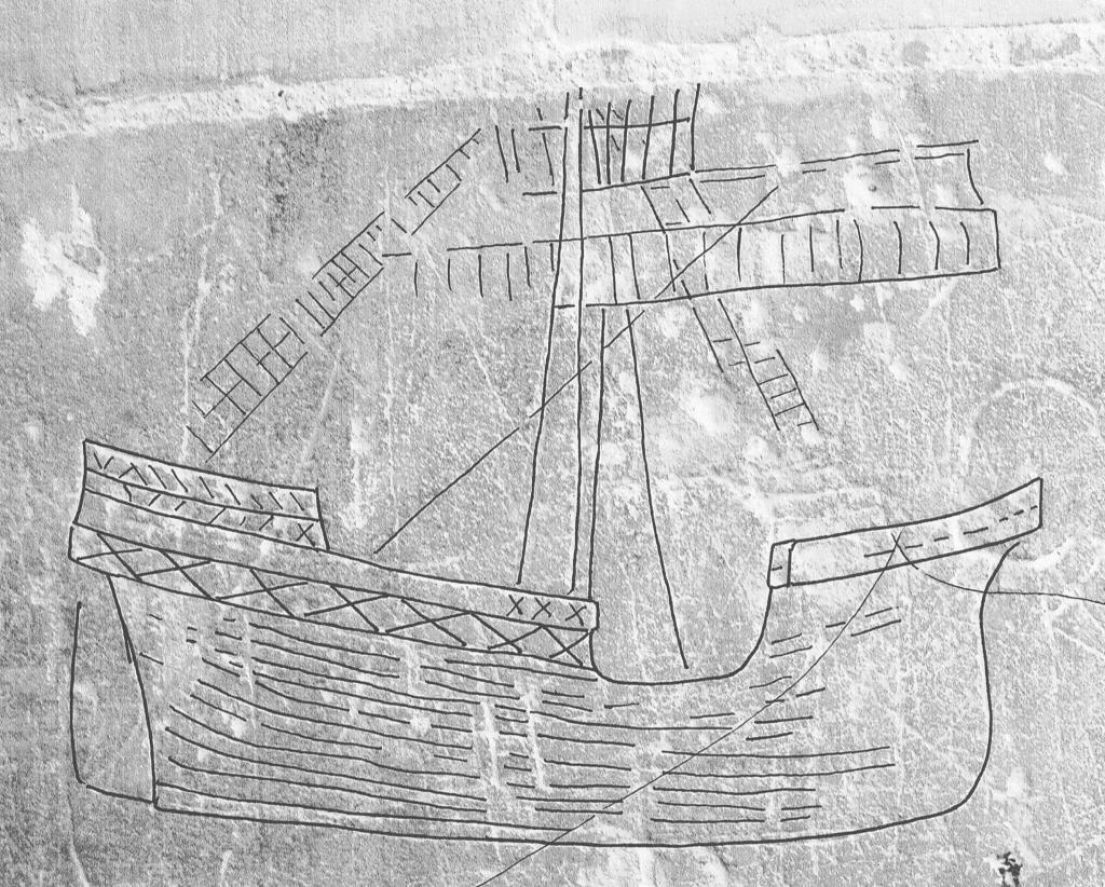 Earlier this year NMGS volunteers began working to identify and record the medieval graffiti in and around the cathedral. 'Medieval' here refers to anything dating before the start of the English Reformation in the 1530s - although, it should be noted, we are also recording the post-medieval material. In the initial 'scoping' stage of a survey, our volunteers use simple LED torches shone at an angle across the surfaces. This raking light is really effective in revealing material that is otherwise invisible to the naked eye. Using digital photography and more powerful lights they are subsequently able to capture high resolution images that then form the basis of a digital photographic record of the graffiti archaeology. Along with the surveys of Norfolk's medieval churches, it is our intention that this material will be freely available online and eventually all be added to the county's Historic Environment Record.

Traces of the 'ordinary'

Most of what you can see from the medieval period in a building like Norwich Cathedral is the legacy of a wealthy elite. However, more ‘ordinary’ folk also left their mark(s) in the form of graffiti scratched into stone, wood and plaster. Below is one such example. What you see here has been highlighted by us for purposes of clarity. Originally though, many of these images were carved into painted plaster and would have been immediately visible to the naked eye. The design of the ship suggests that it is a 'cog', a type that would have been a common sight in the North Sea in the mid-15th century. Furthermore, it seems reasonable to assume that the carving was contemporary with this date. Also, due to evidence gathered by the survey at several sites on the north Norfolk coast, we know that ship carvings such as this were often tolerated within the church. In fact, rather than being graffiti in the modern sense, the majority of the early material appears to be devotional in nature.

The most common type of graffiti we are finding in Norfolk are compass-drawn, commonly known as 'daisywheels'. These are circles containing overlapping semi-circles that form distinctive petal patterns. Below, you can see a beautiful little multiple daisywheel that our volunteers discovered at kneeling height, immediately to the west of the organ screen. There are several different theories about the meaning of these enigmatic symbols, ranging from them being related to the circular 'Consecration Crosses' that sanctified a newly constructed church, to the possibility of them being used by masons to instruct apprentices about geometry, as well as to test the precision of their compasses. However, it is now widely accepted that many of these are ritual protection markings, invested by their 'authors' with the power of protecting them from evil influences.

Although the following image is not 'medieval' according to the definition we work within, it is, nevertheless, a fascinating discovery. The two four-line staves are for the left and right hands of someone playing a keyboard (presumably, an organ in the context of the cathedral). Although there is further work to be done to date this, we currently believe that this was etched into the cathedral walls sometime in the second half of the 16th century. Standing by this, one cannot but be seized by a sense of wonder. Who carved this? Was it one of the cathedral organists perhaps? It is this sense of presence that really stretches my imagination - and those of the members of the public we show this kind of material to. It reminds us vividly that others have passed this way long before this present moment.

The final image I will share with you here is of some writing carved into an area of the cathedral where a lot of people would have passed in medieval times. The style of the writing suggests that it is of a late medieval date. Initially, this caused us a good degree of confusion as we sought to decipher it. However, project Director, Matt Champion, cracked the code, realising that it was actually upside down and spelt the name of a local Norwich family, 'Keynsford'. The key question for us is this: was this carved upside down in its current situation, or was it inverted when the stone was placed here? For a range of reasons we believe the former scenario to be the case. Why should it matter either way? It is significant because, in pre-modern English society, to invert something like this is generally acknowledged to be a way of wishing ill-fortune upon a subject - a form of curse. In addition, the curious symbol seen below the lettering resembles an astrological symbol relating to the moon – another common feature of ritual curses. It is interesting that we have also found two other names so far in the cathedral that also appear to be written upside down. Although there is more work to be done on this aspect of our findings, it is clear that our work is raising some very interesting questions about how (relatively) ordinary people related to a medieval cathedral.

Whereas medieval historic records are inevitably skewed towards the legacies of the wealthiest 5-10% of the population, medieval graffiti archaeology is contributing to a corrective vision (so to speak). Piece by piece - without the picture on the lid to guide them – the NMGS (and other surveys we are mentoring), in association with the wider academic community, are beginning to assemble the puzzle. The 'voice' of the common folk is beginning to be heard.

As part of the Heritage Open Day programme volunteers from the NMGS will be sharing their discoveries at Norwich Cathedral on Friday 13th and Saturday 14th September. For further details, please click HERE

I would like to thank NMAS Director, Matt Champion, for his expert advice and helpful comments on the draft for this article; naturally I remain responsible for any errors that remain.