Medway Queen – a heroine of Dunkirk

Built for summer day cruises in the the jazz age, Medway Queen showed her real metal during the Second World War, making no less than 7 trips as part of the unique Dunkirk evacuation fleet. Be ready to both laugh and cry as Richard Halton from the Medway Queen Preservation Society helps us discover her story through 8 curious items from her history. 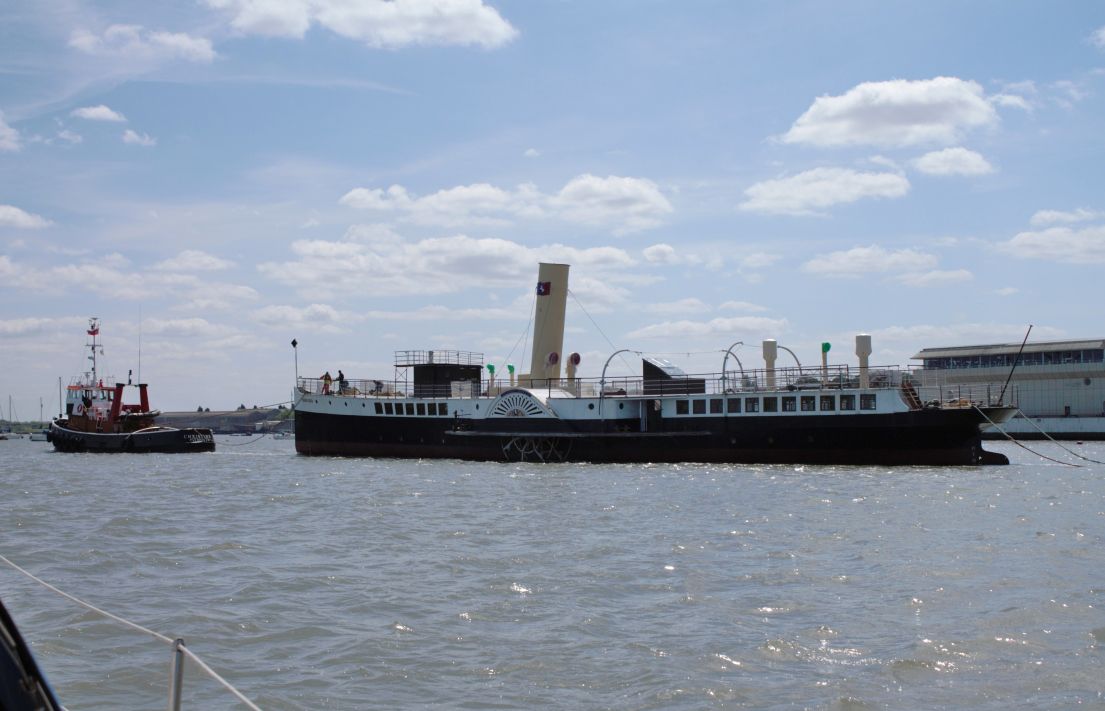 © Jean Pierre Declemy - Thanks to the extraordinary work of the Medway Queen Preservation Society, this stunning lady still sparkles on the water.

Medway Queen was launched and entered service in 1924. Her usual route was Strood (Rochester, Kent) to Southend and on to Herne Bay. In WWII she became a Royal Navy minesweeper, HMS Medway Queen, and made no less than seven trips during the Dunkirk evacuation.

She is now moored at Gillingham Pier in Kent. Before the Covid-19 restrictions she was undergoing restoration by a willing team of volunteers and was open to the public on Saturdays. As soon as we can safely and legally do so, both of these activities will be resumed, but in the meantime here are 8 curious objects from her history: 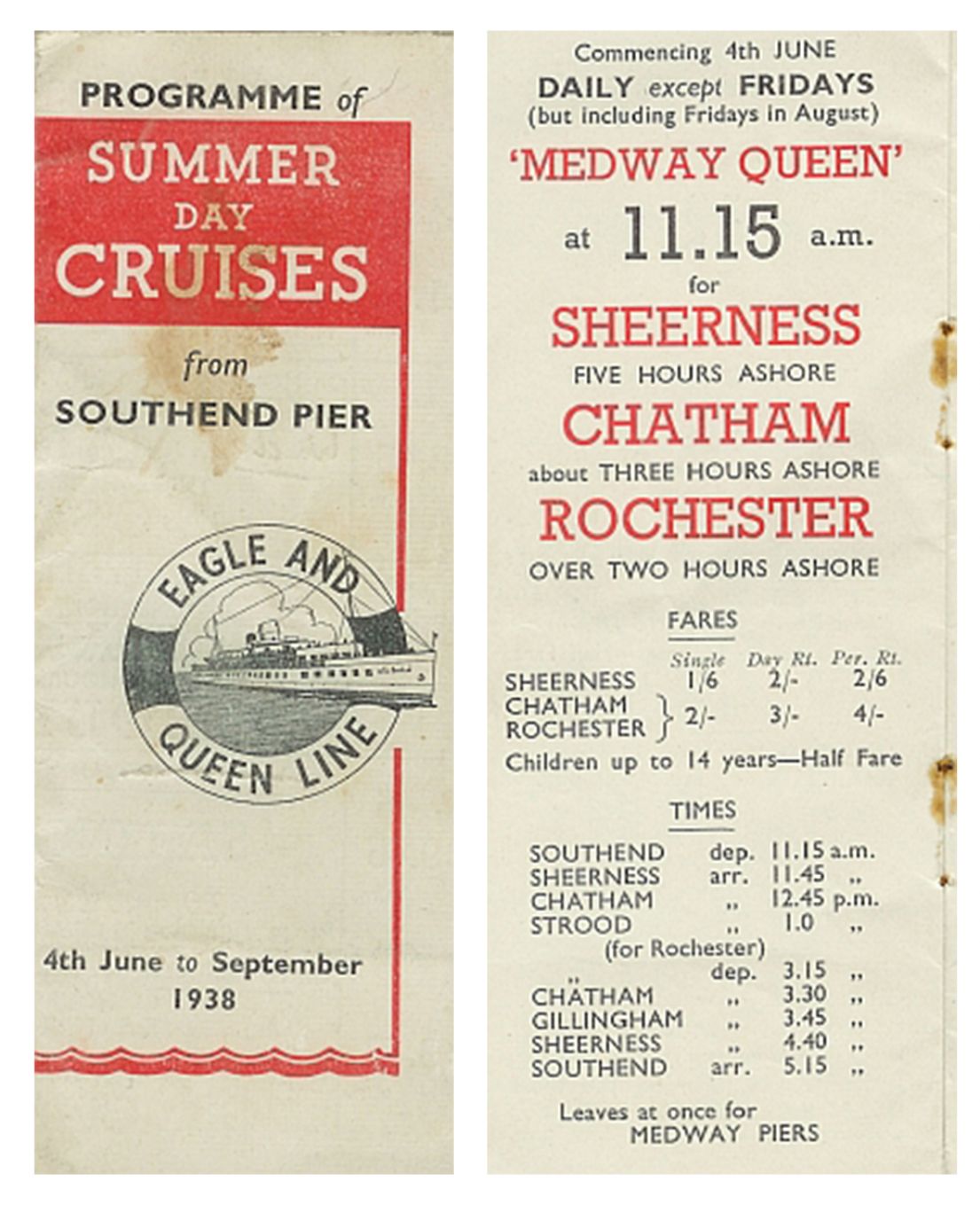 Medway Queen’s maiden voyage from Strood to Southend took place on Friday 18th July 1924 with a party of invited guests. From then until the outbreak of war she plied her trade on the Thames Estuary as indicated on this 1938 promotional leaflet for excursions from Southend. The ship was originally coal burning and early photographs show evidence of that in the funnel emissions. In 1938 she was reboilered and converted to oil firing which resulted in less visible smoke. A side effect of the fuel change was increased speed and convenience of refuelling which contributed to her ability to make so many trips during the Dunkirk evacuation. Medway Queen’s last pre- war voyages were assisting in the evacuation of vulnerable women and children from London to East Anglia in early September 1939.

HMS Medway Queen was converted for minesweeping in Deptford and she was commissioned into the Royal Navy in November 1939. Her First Lieutenant was John Graves and this is his dress sword (on long term loan to MQPS). John Graves was posted to HMS Vernon as a training officer after Dunkirk but, aside from a few months as an accommodation vessel in 1943/44, the ship continued minesweeping throughout the war and into 1946. In the latter years she was based at Granton as a training vessel where the accepted routine was to leave harbour in the morning and conduct training exercises out into the North Sea. With the day’s programme completed the ship would turn for home and the crew would drop a trawl net over the stern. The resulting “catch” was sold to chip shops and restaurants near the harbour! 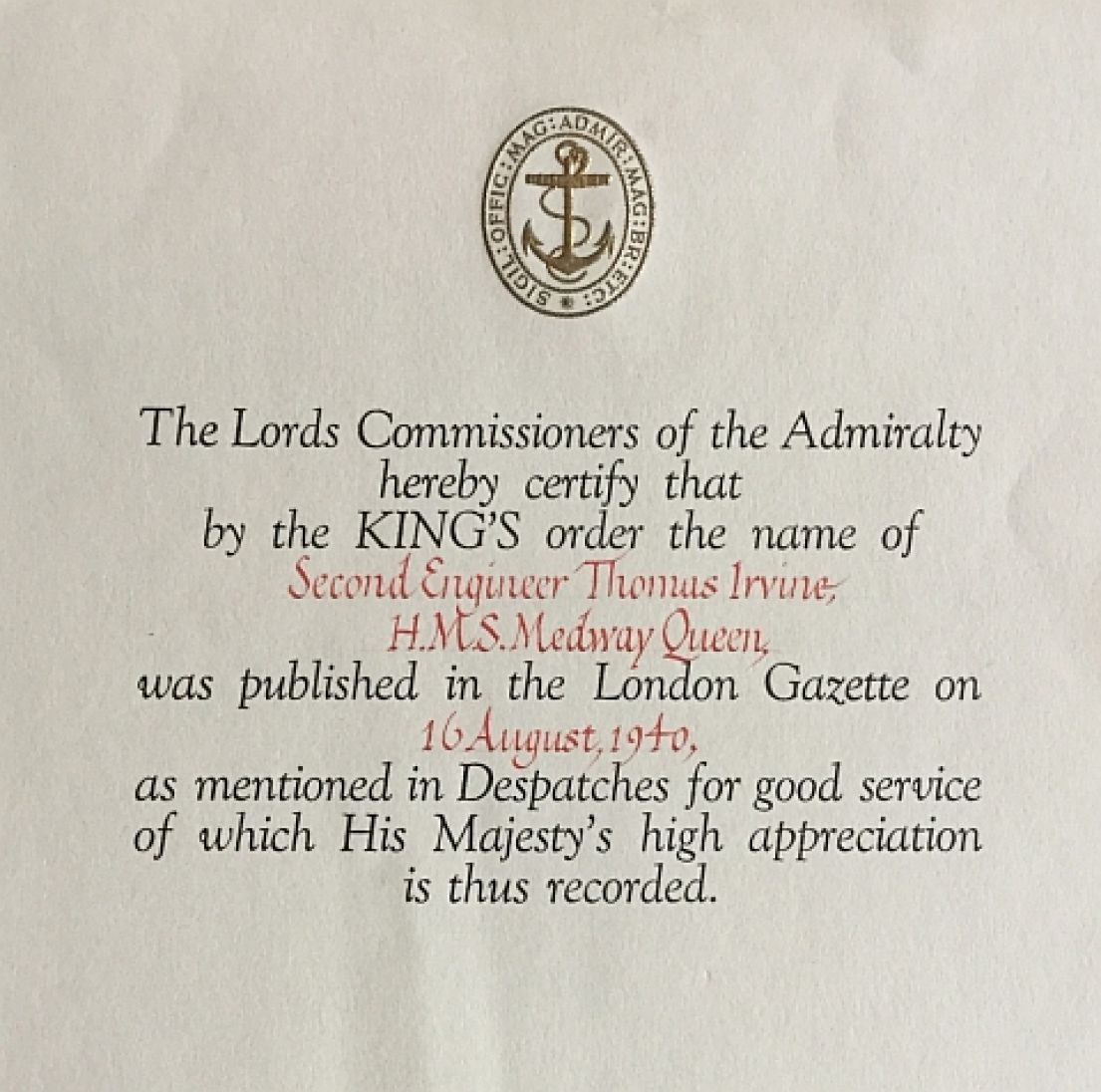 Medway Queen and her crew made seven trips to Dunkirk in eight consecutive nights. The danger and sheer exhaustion must have taken an enormous toll and some, of course, did not manage all seven trips. Medway Queen is a small ship with a small crew but no less than seven of her men were rewarded for their gallantry:

The certificate shown is for Thomas Irvine’s (2nd Engineer) MID which has been generously donated to the society. Thomas joined HMS Medway Queen in November 1939 and served on board throughout the war, including her time as a training ship. 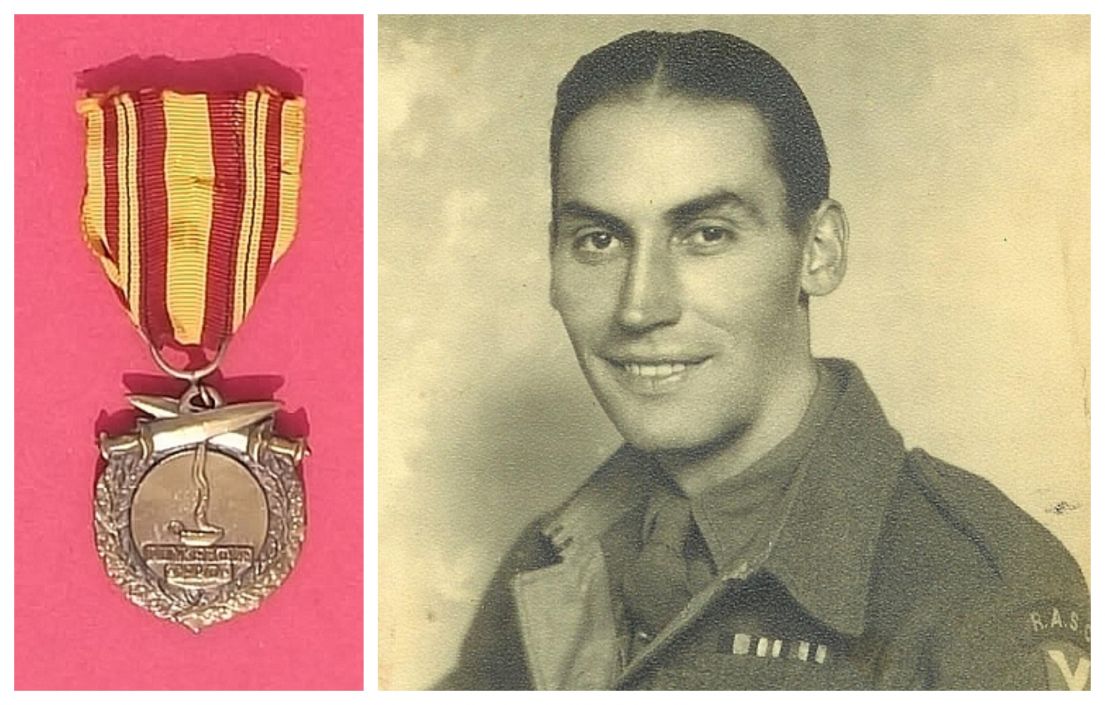 The Dunkerque Medal was created in 1960 by the town of Dunkerque to commemorate the actions of May and June 1940. It was initially awarded to French personnel but in 1970 it was also awarded to any allied member involved in operation Dynamo between 29th May and 3rd June including the civilian little ship volunteers and those soldiers evacuated.

The example shown was awarded to Jim Chivers (RASC) who kindly left the medal to the Medway Queen Preservation Society in his will. Jim waited on the beaches under fire for two days. At first they were at La Panne but soon moved westward towards Dunkirk. Jim embarked on June 1st when he and his colleagues were sent to the East Mole and boarded Medway Queen under shell fire. He thinks this was late in the afternoon or evening but remembers little except some surprise that the crew were Royal Navy and not civilian. 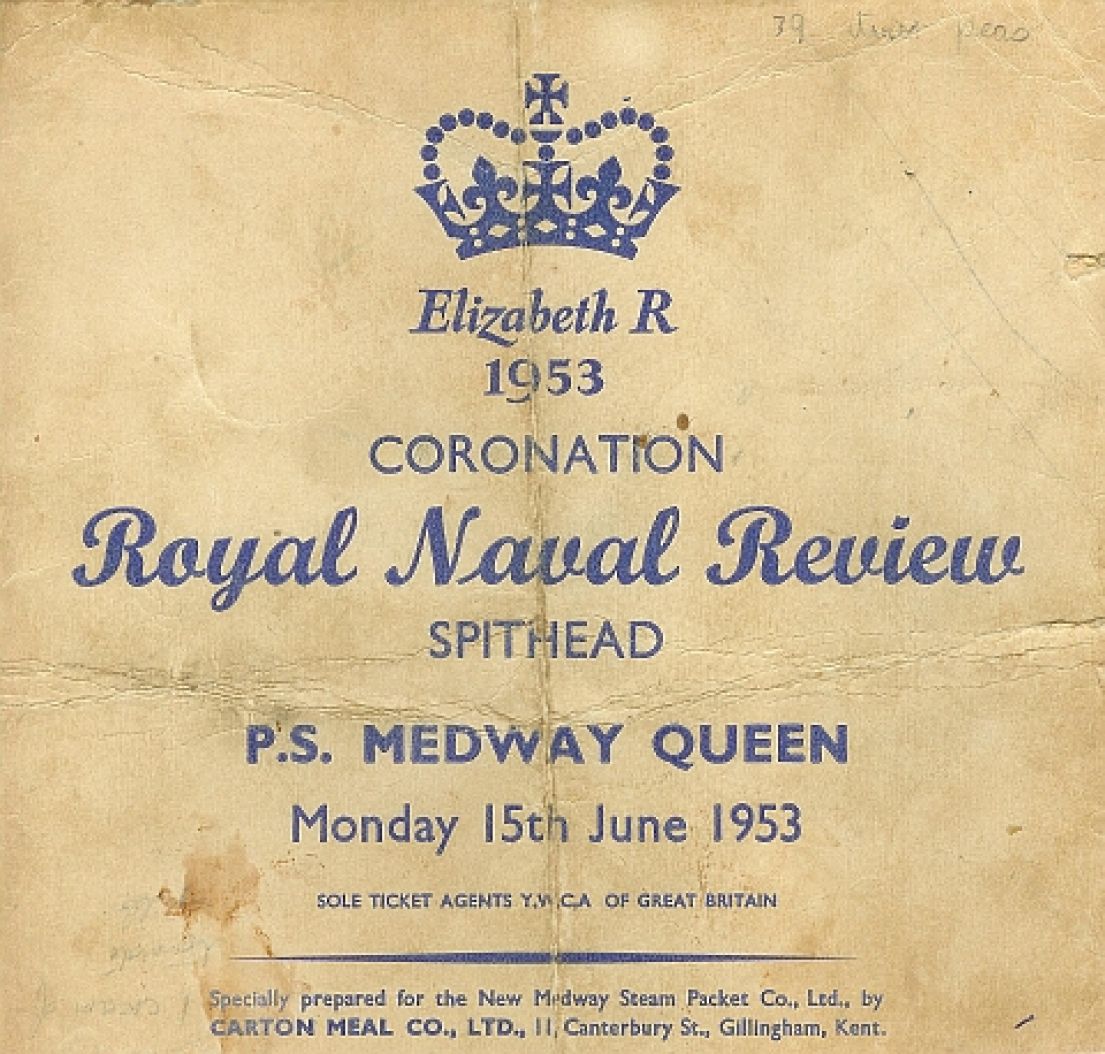 Medway Queen returned to excursion service in 1947. A highlight of her post-war career was participation in the Coronation Naval Review at Spithead in 1953. The ship was included in the fleet for the formal review and also carried some 400 passengers who had travelled down from London Waterloo on a pre-booked excursion. The ticket price included a packed lunch and this rare item is the cardboard cover from a lunch box. It only survived because there is a laundry list written on the reverse! The lunches were fairly basic and not universally approved of by all accounts. The party left London (Waterloo) at 7am, travelled to Southampton where they boarded Medway Queen at one of the ocean liner docks. The tide was fairly low and disembarking train passengers’ first glimpse of their ship was the top of the funnel peering over the dockside! 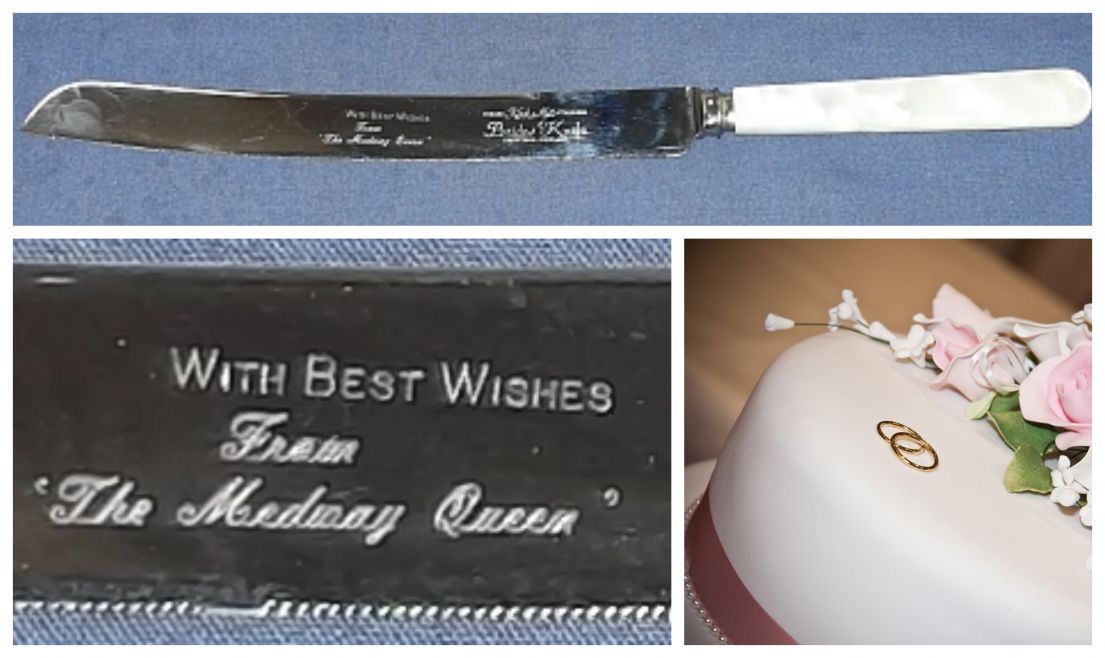 In 1966 Medway Queen opened as a static clubhouse and restaurant at a marina on the Isle of Wight. In the evenings the bars were open until 2am (officially) and the atmosphere would have been less sedate! The business flourished and in due course a second ship, PS Ryde Queen, joined her. The restaurant and functions side of the business were moved to the larger ship in 1972 and Medway Queen became a discotheque. This continued until the end of 1974 when the ship fell out of use.

Wedding receptions were a significant side-line and a souvenir cake knife was presented to each couple. This one was donated to the MQPS in 2016, the 50th anniversary year of the opening of the Medway Queen Club. 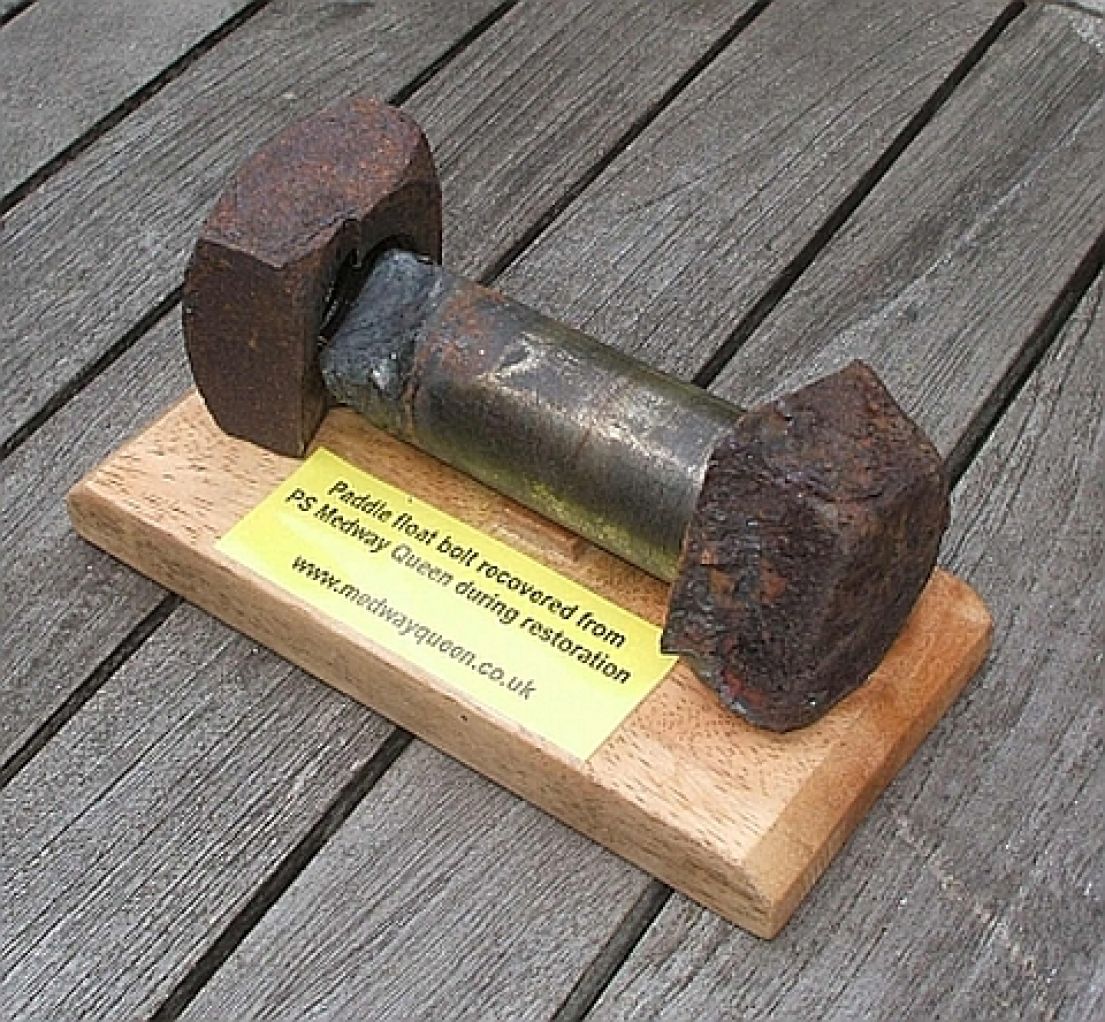 Medway Queen was returned to the river Medway in 1984 for preservation. Our society was formed a year later to support that project but in due course was forced to buy the ship from the Official Receiver to save her from scrapping. It took many years of hard work but in 2009 a full rebuild was commenced in Bristol, largely funded by what was then the Heritage Lottery Fund (now National Lottery Heritage Fund).

This bolt was removed from a paddle wheel during reconstruction but we have no way of knowing if it is an original from 1924 or, more likely, from one of many subsequent refits. The paddle wheels received attention in a 1942 refit in Granton (Edinburgh). Alfred Turnbull, who worked on that programme, recalled that they used punts moored alongside to get at the areas they were working on; parts were removed and lifted onto the quay. In the case of the “banjo” (the eccentric wheel hub that actuates the paddle feathering) this meant lowering it into the punt and then moving to the quayside. Unfortunately, the heavy banjo slipped and both it and Albert plunged into the harbour. Albert was summoned to the foreman’s office where he explained that it wasn’t ‘lost’ because he knew where it was. It was on the harbour bottom just near HMS Medway Queen!” 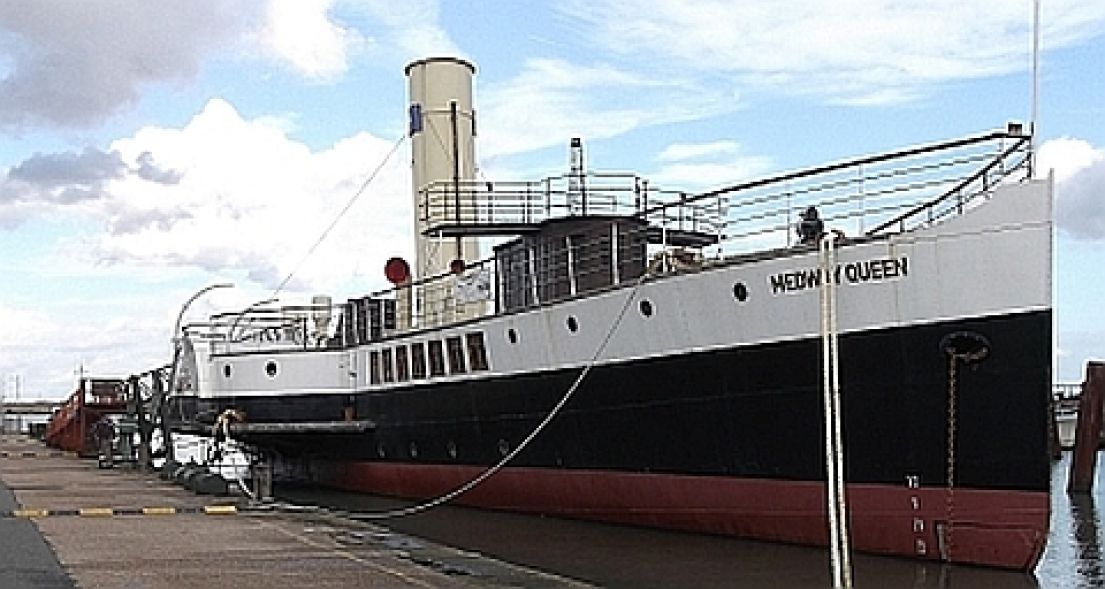 The most amazing object of all has to be the ship herself. Probably the largest surviving artefact from the Dunkirk Evacuation in the UK. The hull was reconstructed in the HLF funded restoration programme and the work continues with fitting out the interior. Medway Queen is about 180 feet long and the ship’s hull has a beam (width) of 25 feet. The full width over paddle boxes is 50 feet. She’s a big project for a voluntary society and any offers of help – financial or physical – are always welcome. 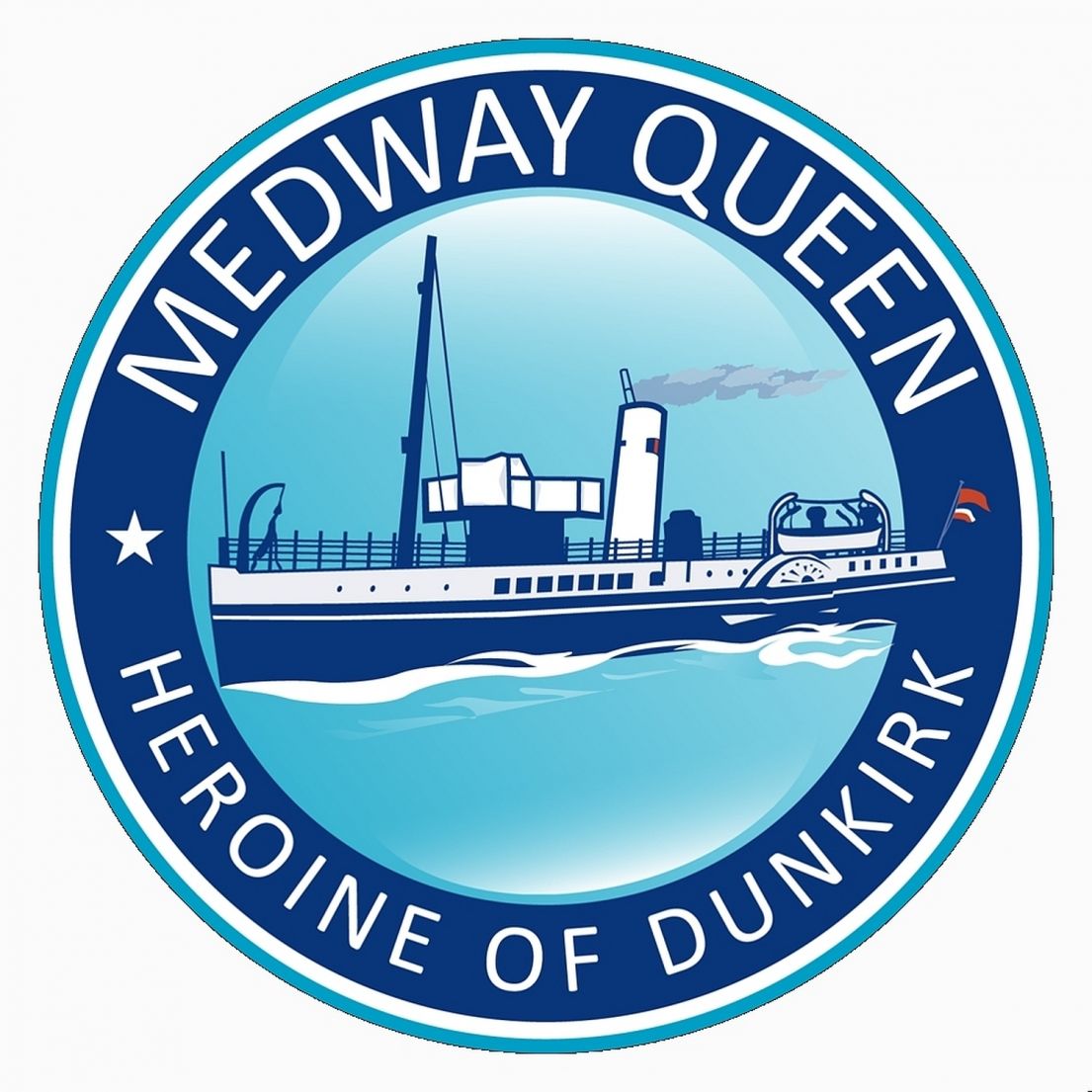 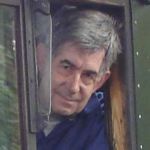 Richard is a retired software applications engineer. He is a trustee of the Medway Queen Preservation Society and ‘works’ from home as a volunteer publicity officer for the ship.